Deal alert: You can fly round-trip Vancouver to Japan for only $557 CAD

This ticket with Japan Airlines, which is a five-star airline, offers a number of return tickets from Vancouver for about half the regular price.
Apr 11, 2019 11:48 AM By: Elana Shepert

Japan offers some of the most fascinating travel experiences found anywhere on the planet. Furthermore, the country itself is stunningly beautiful.

Unfortunately, tickets to the 'land of the rising sun' usually cost around $1000, and sometimes even higher. Luckily, this ticket with Japan Airlines, which is a five-star airline, offers a number of return tickets from Vancouver for about half the regular price.

The flight below departs Vancouver on Tuesday, December 3 and returns from Osaka on Wednesday, December 11. What's more, this itinerary only has one short layover in Tokyo in either direction.

The total cost of the round-trip ticket comes to $557.88 CAD including all taxes and fees. 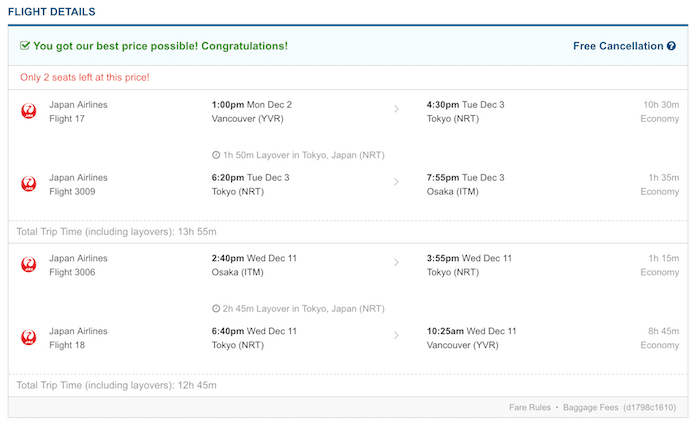 Osaka is the second largest city in Japan after Tokyo. It has a beautiful castle, Universal Studios on the waterfront, the National Art Museum, a beautiful park with a waterfall, multiple temples, an aquarium, and much more. In addition, it is known for its vibrant nightlife, delectable eateries, and modern architecture.

Of course, there are a number of places worth visiting outside of Osaka, too. From Mount Fuji to the Ghibli Museum, the Zao Fox Village to Tokyo's Robot Restaurant, there are endless things to see and do.

You can book your travel here.

Canadians will be able to visit Hawaii without quarantining starting this September
Aug 5, 2020 7:48 PM