Why this man is travelling across Canada on a scooter

Rich Adams is a man on a mission to end animal cruelty by spreading awareness from coast to coast — all while riding a manually-powered scooter.
Jul 20, 2019 2:09 PM By: Castanet

Rich Adams is a man on a mission to end animal cruelty by spreading awareness from coast to coast — all while riding a manually-powered scooter. 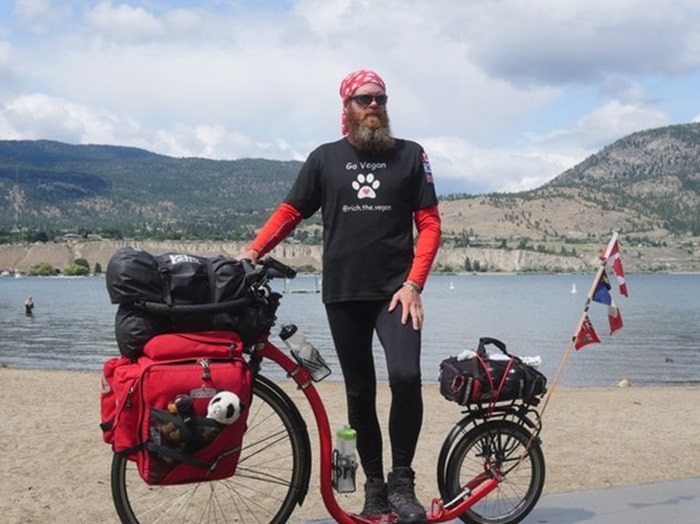 Why this man is travelling across Canada on a scooter. Photo courtesy of Rich Adams

It all started in South Korea in 2018, when Adams took his little scooter on a tour around the country to speak to people about animal cruelty in the form of the dog meat trade.

"I thought, a six-foot guy, ginger beard, going across South Korea, I'm going to get attention," he said with a laugh.

He teamed up with a local woman and started rescuing dogs, rather than just raising awareness. Some of the dogs came home with him to Canada, including one special pup named Kathy.

"She was probably in the worst condition out of all the dogs, she was in a cage essentially left to rot, her eyes were bleeding," Adams said.

"We got her healthy, she was living with me, we were lining up an adoption, when unfortunately she took ill, and she died in my arms."

Adams immediately knew that he wanted Kathy's death to have a meaning, and came up with the idea for a cross-Canada scooter trip that he dubbed "Kathy's Tail."

He decked out his push-powered scooter in Canadian red and white, and started at the Atlantic Ocean this spring by dipping one wheel in the water.

He chronicles his journey online, where he is known as "Rich the Vegan" on Facebook and on his website. Everywhere he goes, his flashy look and unusual vehicle allow him to spark conversations about the issues he cares about.

"This is physically very hard, kind of equivalent to running and much harder than cycling," Adams explained. "I wanted to show that if I can do something physically as challenging as this, that people have no excuses and they can be kind to animals."

It took months, but on Friday morning, Adams made it to Penticton, with his end goal of the Pacific Ocean in site. He is now heading west through Princeton and Hope into the Lower Mainland, and joked that he hoped the route would be easy.

"I'm hoping there is some downhill," he laughed. "It never stops going up! It has to come down at some point but I guess I haven't reached that part yet."

The main goal is simply engagement and awareness about animal cruelty and the vegan lifestyle, not fundraising. He says people are welcome to donate through his website, the bare minimum of which helps fund his journey and the rest of which goes toward more dog meat trade rescues.

"And one of the most meaningful things you can do is go vegan," Adams said.

"You can be a hero in your day to day lives, you're no longer hurting a living being, you're saving lives."

Canadians will be able to visit Hawaii without quarantining starting this September
Aug 5, 2020 7:48 PM