Like Northern Ireland itself, the Mulhall family’s fortunes changed when the HBO fantasy series Game of Thrones(GoT) came calling almost a decade ago.
Apr 15, 2019 5:12 PM By: Vancouver Courier 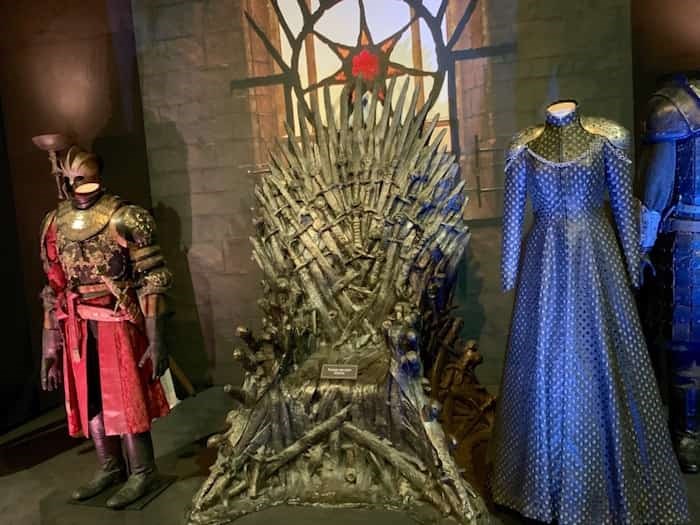 The Iron Throne, and key costumes, on display at Game of Thrones: The Touring Exhibition in Belfast. Photo Jennifer Bain

There are squeals of delight as Summer and Grey Wind make a surprise arrival at Winterfell to meet the latest batch of “Thronies.” The direwolves are surprisingly chill and have been trained not to look at cameras so they alternate between snuggling with strangers and laying down for power naps. 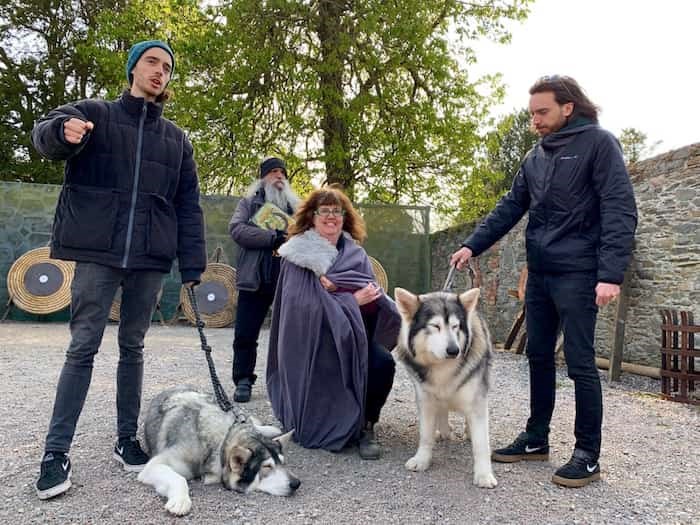 Writer Jennifer Bain gets to meet the Northern Inuit dogs that appeared as pups in Game of Thrones. Their owners, Caelan (left) and Ross (right) Mulhall, along with their dad William (back) all appeared as extras in the show.

Caelan Mulhall keeps Grey Wind on a leash, while his twin Ross does the same with Summer. Their dad William stands silently behind them with a fabulous grey beard and fierce expression, looking every inch like the Dothraki slave master he gets to be on television. The brothers explain that these charming dogs are really Northern Inuits named Thor and Odin — and we already know that Winterfell is a sprawling, National Trust property known as Castle Ward.

Like Northern Ireland itself, the Mulhall family’s fortunes changed when the HBO fantasy series Game of Thrones(GoT) came calling almost a decade ago, giving their pups brief but memorable roles  — computer-generated imagery took over as the dogs grew — and later hiring the rest of the family as human extras. 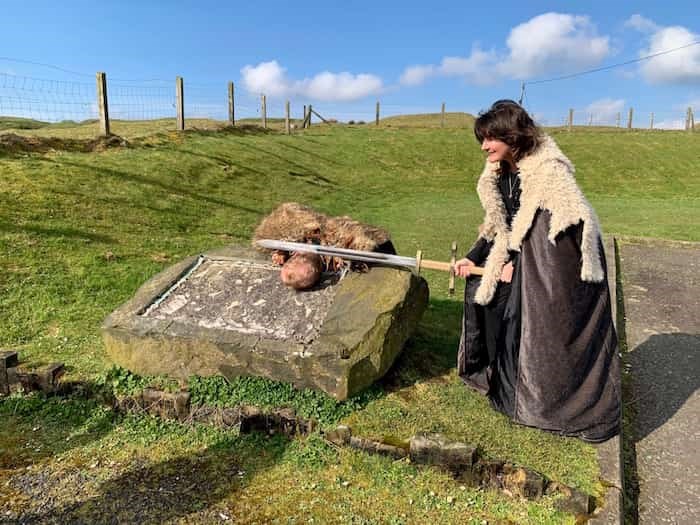 “We were like the lepers of the world here in Northern Ireland. We were like the greyscale,” says tour guide Dee Morgan, alluding to a gruesome, usually lethal skin disease featured on the show. “We never thought that Game of Thrones would do for us what Lord of the Rings has done in New Zealand. It’s our time to shine.

And shine the country does, as it puts the years of strife known as the Troubles behind it and flourishes as part of the United Kingdom with an open border to the Republic of Ireland. Right now, as the eighth and final season of television’s most important show airs, Belfast is the temporary home to both Game of Thrones: The Touring Exhibition and the Game of Thrones Tapestry. 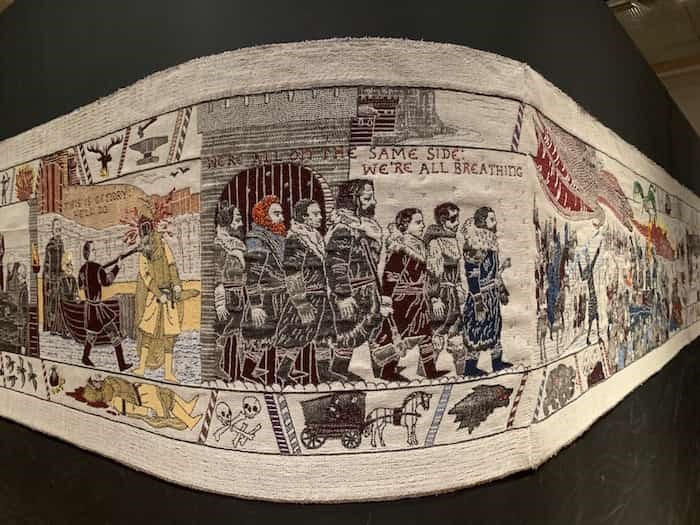 At the Ulster Museum in Belfast, the Game of Thrones Tapestry is on temporary display and is 80-metres long. Photo Jennifer Bain

The tapestry is made from Irish linen and comes with an amusing warning about graphic content. True to the show, the 80-metre long work-in-progress details every episode in the first seven seasons — incest, murder, mayhem and all — and has boosted visits to Ulster Museum. At the touring exhibition, I gawk at intricate costumes worn by Cersei and the Unsullied, admire swords that Arya and Jaime fought with, and even sit on a replica of the iron throne for a photo before scoring a Christmas ornament in the gift shop of Daenerys riding a dragon.

While Croatia, Malta and Iceland spring to mind when thinking about GoT filming locations, the vast majority of scenes were actually filmed in remote and unrecognizable spots across Northern Ireland and at Titanic Studios in Belfast. 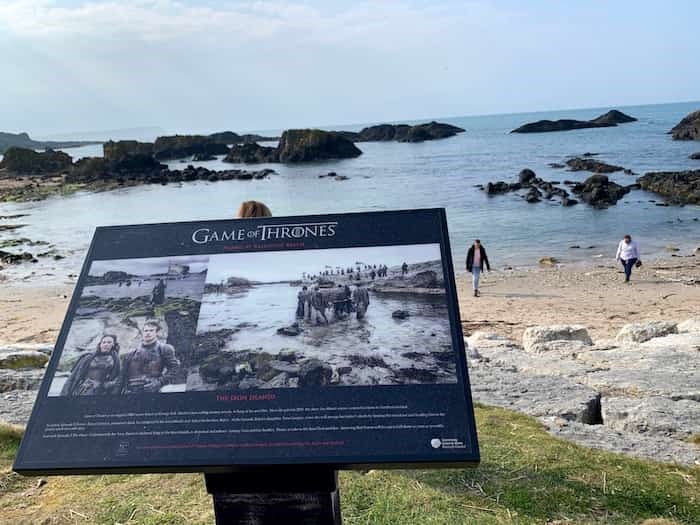 Whenever you find a key Game of Thrones filiming location in Northern Ireland, there will be a plaque like this one in Ballintoy (the Iron Islands). Photo Jennifer Bain

The easiest ways to plot a route through the country are to download the Game of Thrones Filming Locations Northern Ireland app for self-guided road trips, or connect with companies that run day trips out of Belfast, Derry and Dublin to key sites.

I get to the Dark Hedges near Stranocum early one morning to nab a few precious minutes of clear views before other camera-toting Thronies arrive to pretend they’re walking down tree-lined Kingsroad. 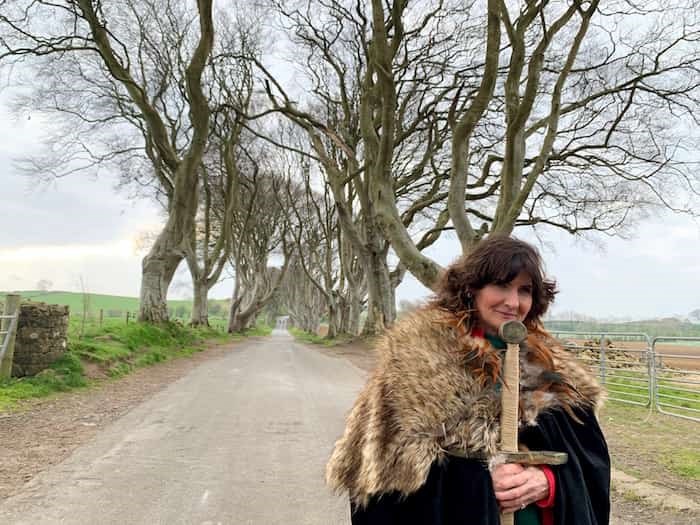 What was once a quiet country lane has attracted so many people that it’s closed to all but local traffic. Deirdre Donnelly, experience manager at Dark Hedges Estate, reveals how two of the enormous, gnarled beech trees planted in the 18th century to create a grand roadway to a private home blew down in a 2016 storm. They were salvaged and transformed into 10 GoT-themed doors depicting season six scenes and are now found in pubs and restaurants near key filming sites. 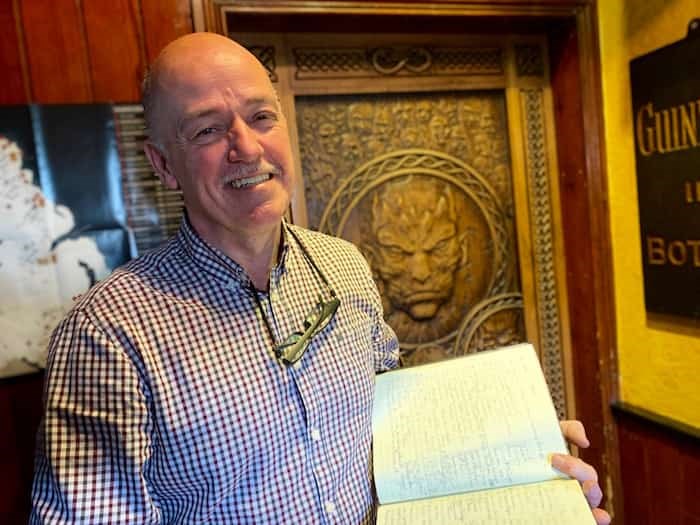 At Owens Bar in Limavady, proprietor Damien Owens loves having one of the Game of Thrones doors that was created from two trees that fell at the Dark Hedges. He has a guestbook he gets Thronies and other guests to sign. Photo Jennifer Bain

I get my “Journey of Doors” passport stamped at five spots, loving door nine with the battle-scarred direwolf at haunted Ballygally Castle Hotel in Ballygally, and door five with the evil Night King and White Walkers at friendly Owens Bar in Limavady, where proprietor Damien Owens loves all the GoT-mad customers and says “the person who thought up the door is a genius.” I have strong memories involving door one at the Cuan restaurant in Strangford, where I drink “Hodoor” beer and wear a fur-trimmed cloak for a medieval banquet.

At Cushendun Caves, I picture Melisandre birthing the shadow creature. At Downhill Strand, I stare at a never-ending sandy beach and the cliff-top Mussenden Temple and think about Melisandre burning effigies. 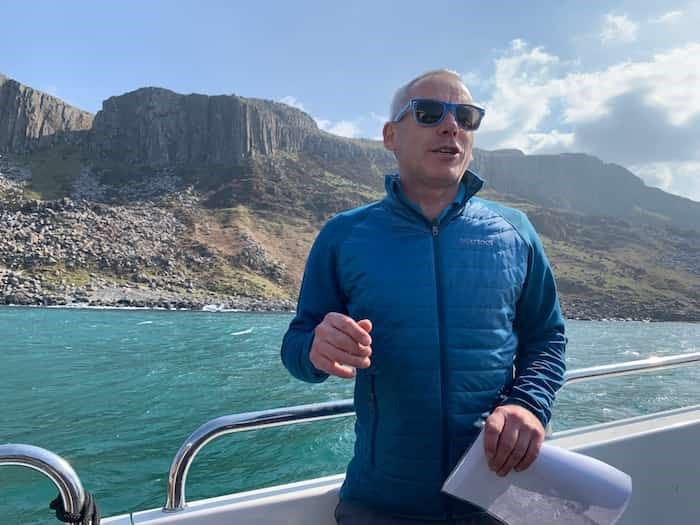 Richard Lafferty of Aquaholics leads a sea safari to Game of Thrones filming locations, including these basalt cliffs that stood in for the Dragonstone Cliffs. Photo Jennifer Bain

In Ballycastle, Richard Lafferty of Aquaholics leads a GoT-themed sea safari to spots like the Dragonstone Cliffs, known locally as Fair Head, and the perfect place to imagine dragons flying over volcanic basalt cliffs where the Irish Sea meets the Atlantic Ocean. Lafferty has helped the TV crew film at sea.

In Tollymore Forest Park, guide Robbie Atkinson of Game of Thrones Tours shares screen shots of when he appeared in the show as an archery expert. “In a roundabout way, being unemployed got me into archery, which got me on to Game of Thrones, and then got me this job four years ago,” he reminisces with a grateful chuckle. 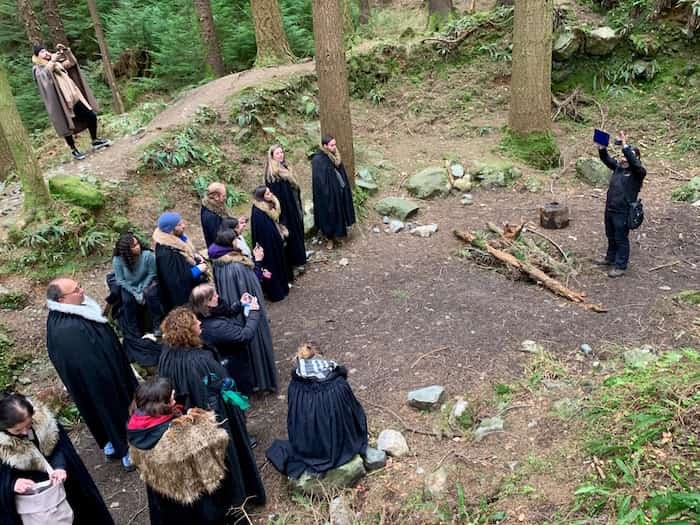 Atkinson leads us to several iconic spots from season one’s first episode, showing video clips on a tablet to set each scene. Steps off the main path in the pine forest, I stand where three members of the Night’s Watch come across a circle of wildling bodies. Beside a bridge on the banks of the park’s shallow river, I see where Ned Stark and his sons discovered direwolf pups, including the white runt that Jon Snow named Ghost. 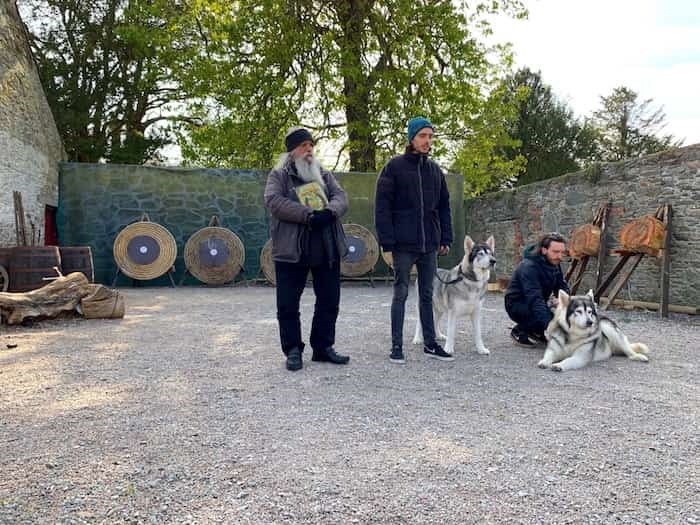 Meeting the Northern Inuit dogs that appear as pups in GoT. Their owners, Caelan (centre) and Ross (right) Mulhall, along with their dad William (left) all appear as extras in the show. Photo Jennifer Bain

Not only do I get to pat two of these now grown “direwolves” over at Winterfell/Castle Ward, I feast on Baratheon Stew and Sansa Lemon Cake while seated on a deerskin in a teepee heated by a wood fire. Then I attempt archery and axe throwing with “the rightful lord of Winterfell,” aka William Van der Kells of Winterfell Tours, an event company that does immersive and interactive tours “where GoT started.”

“I don’t even know why I’m doing this because nothing ever happened here,” jokes Van der Kells before he drives me to various scene locations on the estate and then orders me off “his” land.

Jennifer Bain was hosted by Tourism Northern Ireland and Tourism Ireland, neither of which read or approved this story in advance.