Quazar’s Arcade in Victoria will have 40 machines on the floor at one time, including more pinball machines than any arcade west of Winnipeg.
0
Nov 19, 2018 10:11 AM By: Mike Devlin

Coin-operated pinball machines and upright arcade games met a swift demise in the mid-1990s after being replaced by more sophisticated home- gaming consoles from Sega, Nintendo, and Sony. 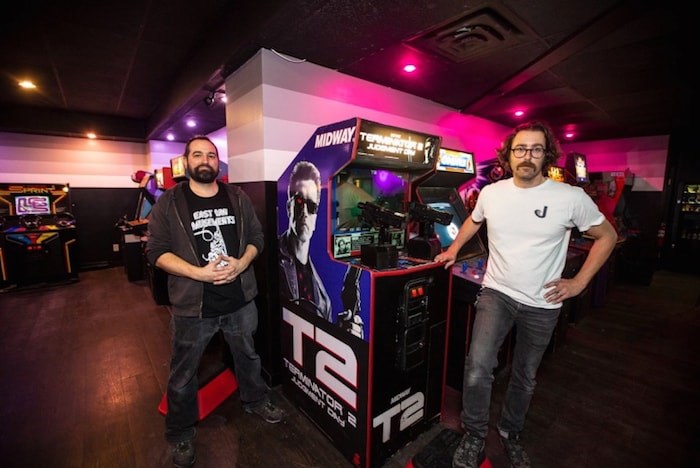 The old-school form of entertainment has bounced back in a big way in recent years, however, with new arcade and pinball games being manufactured at consistent pace — and selling for outrageous prices.

Quazar’s Arcade, at 1215 Government St., will have 40 machines on the floor at one time, Webb said, including more pinball machines than any arcade west of Winnipeg.

The Webb brothers and Lafreniere have spent the last seven or eight months repairing and restoring some of their vintage models, in order to get them game ready.

The lure of arcade classics has been a big talking point for gamers of a certain age, but Webb believes their core customers will be blown away by the quality of their newer units.

“One-third of the machines we have are made in the last two or three years. We do have two machines that are from 1980s, and we have a lot from the ’90s and early 2000s. That seems to be the sweet spot for pinball.”

Game tokens at Quazar’s Arcade are 50 cents each, which is relatively cheap; arcade games will use one token, while the majority of their pinball games require two tokens.

Three machines in the shop cost three tokens. “Those are heavily modified, premium machines, so we think $1.50 to play those is fair,” Webb said. The most desirable machine in the arcade — a 2017 Alien pinball machine that is one of 120 made — will cost players five tokens. “That’s the one that is going to bring people in. Someone will find out that we have it while they are on their cruise ship and drag their family down to play it.”

Half of their pinball collection was purchased from a collector on Vancouver Island, who provided the Quazar’s Arcade team with valuable expertise as well. Pinball, once considered a forgotten pastime, has enjoyed a big resurgence, making those with a working knowledge of the electronic innards in high-demand. Manufacturers of new pinball machines have found a lucrative market of buyers as a result, as they are easier to maintain.

“There are only a few manufacturers still making them,” Lafreniere said. “But they are making more of them than they ever have. As far as the old games go, a lot of them were probably cast out with the death of the arcade in the late ’90s, when consoles took over. A lot of machines rotted in basements, and were carried out for rubbish.

“At one point, when we first started, there was an incredible amount of machines available, but then they just started drying up. It is a growing trend. Collectors and businesses are trying to snatch these things up.”