I was part of a special evening June 1, during which Star Wars: Galaxy’s Edge was reserved exclusively for members of a conference I was attending.
0
Jun 14, 2019 8:22 PM By: Sandra Thomas 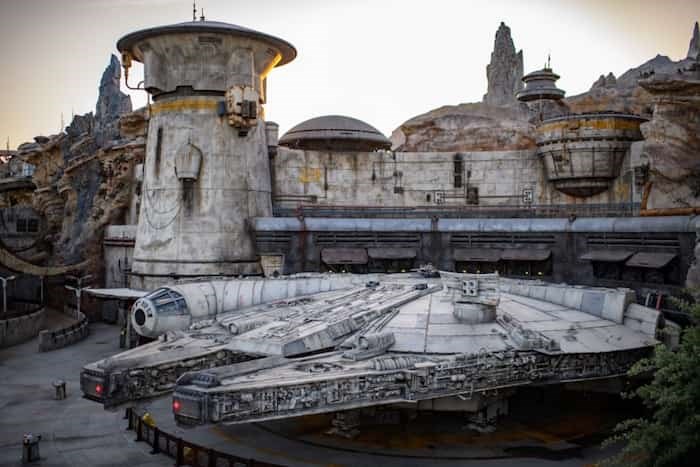 After waiting in the shorter “singles” line for the Millennium Falcon: Smugglers Run ride, part of the new Star Wars: Galaxy’s Edge attraction at Disneyland Anaheim, I clambered aboard the infamous bucket of bolts with a group of complete strangers.

I was part of a special evening June 1, during which Star Wars: Galaxy’s Edge was reserved exclusively for members of a conference I was attending dedicated to travel and tourism — our sneak peek took place the day after the attraction opened. 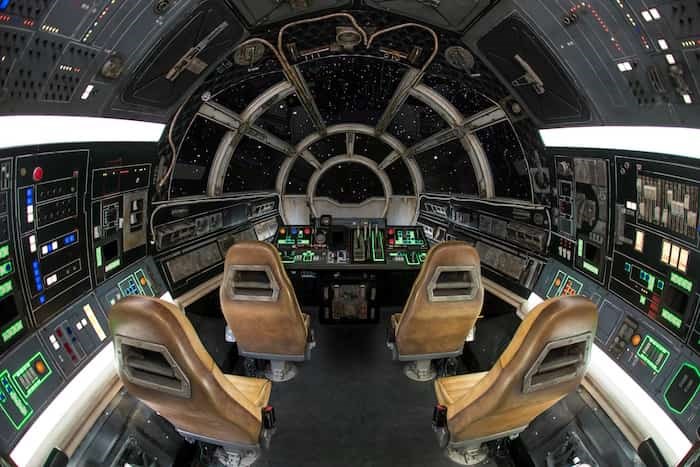 Despite the fact I had no prior history with this group, we knew we’d have to work together to complete our dubious mission and fly the “fastest hunk of junk in the galaxy” safely or we’d all be doomed. As we took our seats, each of us began our assigned tasks. My job as "flight engineer" was to keep the Falcon from falling apart on its mission by managing the ship’s systems, repairing any damage it encountered and taking control of its special modifications. Translation: I frantically pressed a lot of flashing buttons while the ship tossed us around like a trailer in a tornado. You can see part of my experience in this video.

To understand just how we came to be in this life-threatening predicament, one must first consider a little Star Wars history. Following the events of Star Wars: The Last Jedi, Chewbacca brought the Falcon to the Black Spire Outpost on the edge of the galaxy for repairs. In exchange for some much-needed replacement parts, Chewie loaned the Falcon to Hondo Ohnaka, a smuggler making good use of the ship, which can make the Kessel Run in less than 12 parsecs. 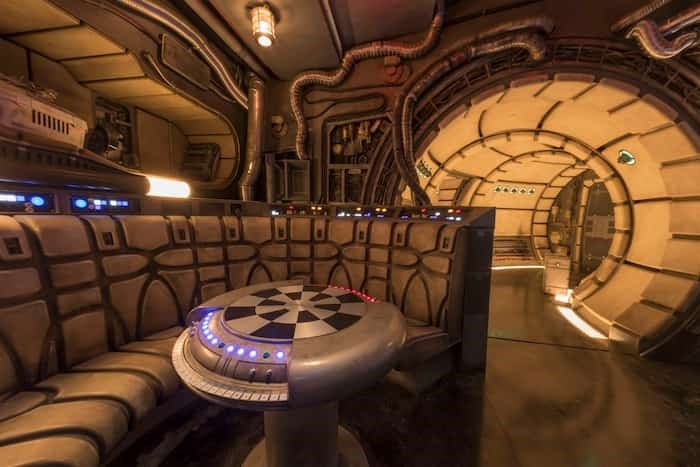 The famous main hold lounge is one of several areas Disney guests will discover inside Millennium Falcon: Smugglers Run before taking the controls in one of three unique and critical roles aboard the fastest ship in the galaxy at Star Wars: Galaxy’s Edge. Photo Joshua Sudock/Disney Parks

“Hondo,” a fan-favourite miscreant from the Star Wars: The Clone Wars and Star Wars Rebels animated TV series, is a Weequay pirate always looking for the next big score and is running what he calls a “legitimate business” — Ohnaka Transport Solutions — out of the spaceport. When we show up on the scene we’re told Hondo has more cargo than he can handle and needs extra flight crews to make some runs for him — especially crews that won’t ask too many questions about the cargo or how it was acquired. 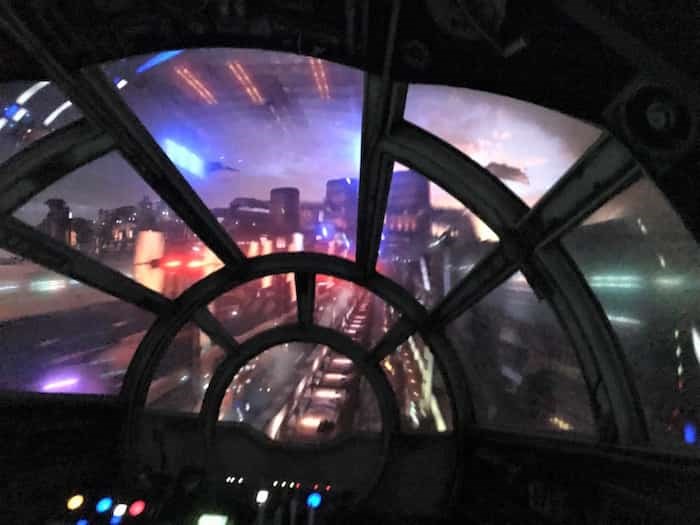 After accepting our smuggling assignment, we strapped ourselves into the Falcon and, despite quickly accelerating to “lightspeed,” and with some assistance from Chewbacca — we did not exactly complete our mission as planned, which was demonstrated at the end of the ride by the obvious damage to the ship’s hallways we witnessed as we strolled what amounted to the Star Wars walk of shame. 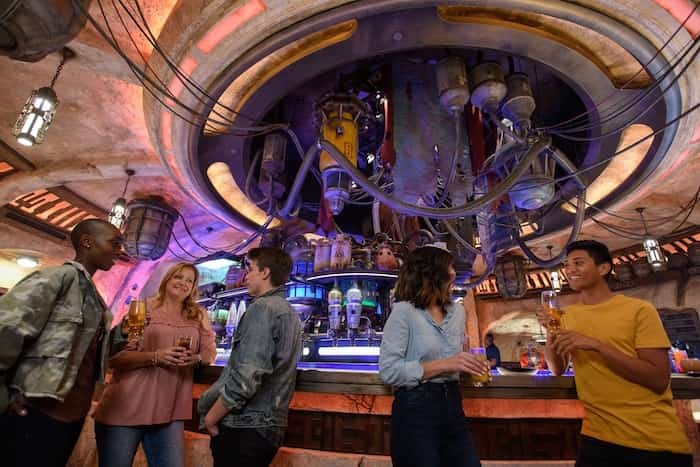 At that point, I decided to drown my sorrows in Oga’s Cantina, the heartbeat of Black Spire Outpost, where guests can gather to share their own tales from around the galaxy as they enjoy out-of-this-world beverages served in themed vessels and listen to galactic tunes from DJ R-3X, the former droid pilot from Star Tours. The choices are endless and include the Jedi Mind Trick, Carbon Freeze, Gold Squadron Lager, White Wampa Ale and more. It also serves the Blue Milk available from Black Spire Outpost, made famous when Luke Skywalker sat down for a meal in Star Wars: A New Hope and drank the cosmic concoction.

Star Wars: Galaxy’s Edge covers more than 14 acres and is the largest single-themed land in Disney Parks' history so there’s a lot to see and do. Other must-experience highlights of this new attraction include:

Where else could you find a former smelter droid turning a spit of meats? This marketplace stall also offers Ronto Wraps and sweet-or-spicy Nuna Turkey Jerky, as well as a selection of specialty beverages.

Craft a lightsaber at Savi’s workshop

Guests in Savi’s workshop hand build lightsabers and feel the presence of the Force as they craft their own weapons and customize them with various hilts, decorative add-ons and the all-important kyber crystals.

Build a droid inside the Droid Depot

Droids can be some of the most loyal companions in the entire Star Wars galaxy and now guests have the chance to build and customize their own astromech (astro) friends at the Droid Depot. Patrons pick pieces and parts off a conveyor belt to construct one of two core models, which can then interact with elements throughout Star Wars: Galaxy’s Edge. 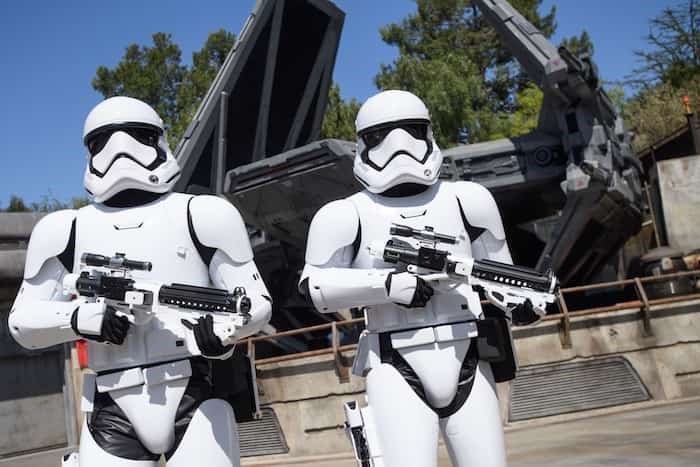 When accessed inside Star Wars: Galaxy’s Edge, the app transforms guests’ mobile devices into their very own Star Wars datapad they can use to scan the contents hidden inside containers, translate languages and tune into communications happening throughout the land.

Support the Resistance or the First Order to gain outpost control

Using the Play Disney Parks app, guests can play together in a game called Outpost Control, which takes place across Star Wars: Galaxy’s Edge. Guests can choose to either support the Resistance or the First Order by hacking the blinking light panels next to doorways throughout Black Spire Outpost. The conflict plays out multiple times throughout the day.

You never know who’ll show up, but when I visited, a paparazzi-shy Chewbacca was strolling the grounds and no, he did not stop for selfies.