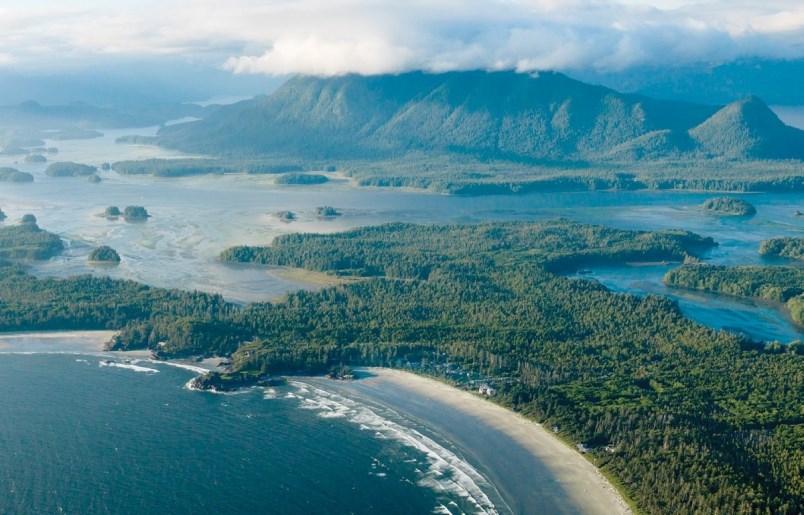 Tofino and Ucluelet would typically be welcoming visitors for storm-watching season, but several hotels are closing down temporarily due to COVID-19 travel restrictions. PHOTO BY TODD BYRNES
The Wickaninnish Inn, the landmark resort on Chesterman Beach near Tofino, is closing for two weeks following a provincial health recommendation that British Columbians stay closer to home.

Charles McDiarmid, managing director for the Inn, said Friday the resort is calling guests with reservations for re-bookings starting on Dec. 8. The last of the current guests at the 75-room resort will have checked out by Tuesday.

The Wickaninnish will close its hotel, bar and restaurant and spa by then, and McDiarmid said most of the 170 staff will be temporarily laid off, leaving some to maintain operations.

“We have to drive down transmission rates as a province and we want to be part of the solution,” McDiarmid said. “Some [other hotels] are following our direction. Some are probably not. Most are not taking any new reservations.”

'Hopefully we can come back in early December'

“It was a bit of a shock to hear the news and we are gathering as much information on the timeline of events — we are speaking directly with Island Health to inquire about any additional recommended next steps,” Black Rock’s assistant general manager said in a Facebook post.

J.J. Belanger, general manager of Crystal Cove Resort and RV Park in Tofino, said the resort is also winding down operations over the next two weeks.

He said there are a few snowbirds with long-term RV sites and some cabin guests are in the middle of long-term stays, but no new bookings are being taken until after Dec. 7.

“Everyone is probably taking the same approach here,” Belanger said. “Hopefully we can come back in early December for a robust season.”

Tofino and Ucluelet would normally be receiving guests for the storm-watching season, but were singled out by the premier and provincial health officer Dr. Bonnie Henry this week as examples of where people of the province should not go as British Columbia grapples with increasing cases of COVID-19.

Nancy Cameron, executive director of Tourism Tofino, said cancellations are pouring in since Premier John Horgan asked people to stay home unless their travel is essential.

“People are responding to the travel order,” Cameron said. “It’s difficult, but we all recognize restrictions around travel is the right thing to do.”

Ucluelet Mayor Mayco Noel said “there are a lot of empty parking lots at hotels in both communities. People aren’t coming. They’re getting the message.”

Noel said the premier and provincial health officer “put a big red dot on us.”

He said Ucluelet, which has about 200 short-term rentals and a population of 1,800, will have a tough time, but it has weathered challenging times before.

“A little community like ours has to look after each other and be respectful, and we’ll get through this.”

Tofino, with a resident population of about 2,000, attracted about 4,000 visitors a day in November 2018, the latest data available from Tourism Tofino. The hotel occupancy during that time was 65.6 per cent.

“We don’t have an estimate of what [the decrease] will be. Cancellations are happening,” she said. “It’s very difficult for tourism businesses, but it’s something I think people understand is necessary.

“We’re all hoping that everyone can do a great job now [in containing COVID], and we can see a number of changes, so Christmas can be better.”