24 hours of food and family-friendly fun in Montreal

What do you do if you only have 24 hours in Montreal and you've got a kid in tow? Well, you absolutely make the most of it.

Brimming with history, culture, and incredible food - including some local and regional iconic items - there is so much to see and do in Montreal that it would be crazy to imagine you can accomplish it all in just one short day. Cast aside any notion that you're going to cover it all, but instead opt for a taste that will definitely leave you wanting more MTL in your life.

The island of Montreal boasts a number of neighbourhoods with distinct feels and amenities. If you anchor yourself close to the banks of the St. Lawrence in the Old Port of Montreal district, you'll find you're in great proximity to several terrific attractions, and you can enjoy that "old world" Europe-meets-Canada vibe, cobblestone streets and all.

We stayed at Le Saint-Sulpice, a newer boutique-style suite hotel offering that is adjacent to the back end of the awe-inspiring Notre Dame Basilica. Just the walk to your room offers some serious historic charm, thanks to the exposed brick walls. The one-bedroom suite had all the trimmings for a good night's sleep, and gave me a quiet and separate space to get some work done first thing in the morning, too.

Being set up so close to the Old Port zone, as well as in the historic heart of the city, it was easy to explore much of Montreal that was immediately at hand. Walking the neighbourhood in both daytime and at night was great fun, particularly because the streets are so animated. 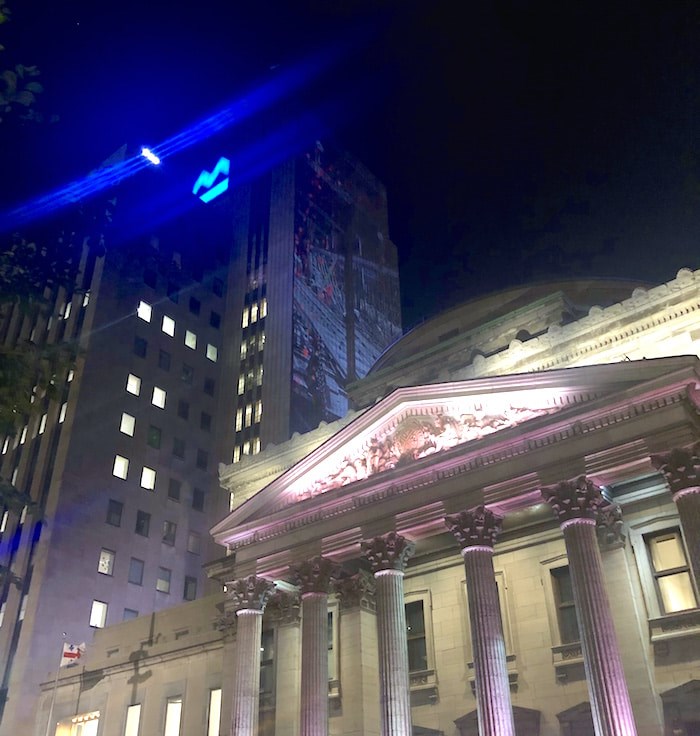 Keep an eye out at night for projections on buildings in Old Montreal, like this one on the side of the BMO building near Notre Dame. Photo by Lindsay William-Ross/Vancouver Is Awesome

This is thanks in part to Cité Memoire, a series of projections on the sides of buildings in the area that tell the story of the city in living motion. Download their app to have a guided experience through the many projections that light up the Old Port several nights a week during the summer, and on weekends in the off-season. Also keep your eyes and ears tuned for street musicians, public art, and lots of terrific people-watching.

Additionally, in the summer, a stroll close to the river, near or on Rue de la Commune or Rue Port de Montreal  means getting glimpses of the night sky lit up by fireworks, courtesy L'International des Feux Loto-Québec. The international fireworks competition runs late-June through late July on select nights, with the La Ronde amusement park as their base. Grab some ice cream (I recommend tucking down a little side street to check out Montreal's beloved La Diperie for a dipped cone) and watch the colours pop in the sky, starting at 10 p.m.

The Old Port of Montreal itself is a hub of activity day and night. There they have lots for kids and grown-ups to enjoy. Adventurers will dig Voiles en Voiles, the pirate-themed aerial obstacle course and climbing playground. You'll need to reserve tickets ahead if it's at a peak time, and keep in mind they close during inclement weather. Thrill-seekers will also enjoy the zip line, which takes daredevils across a lengthy span of over the famous île Bonsecours. 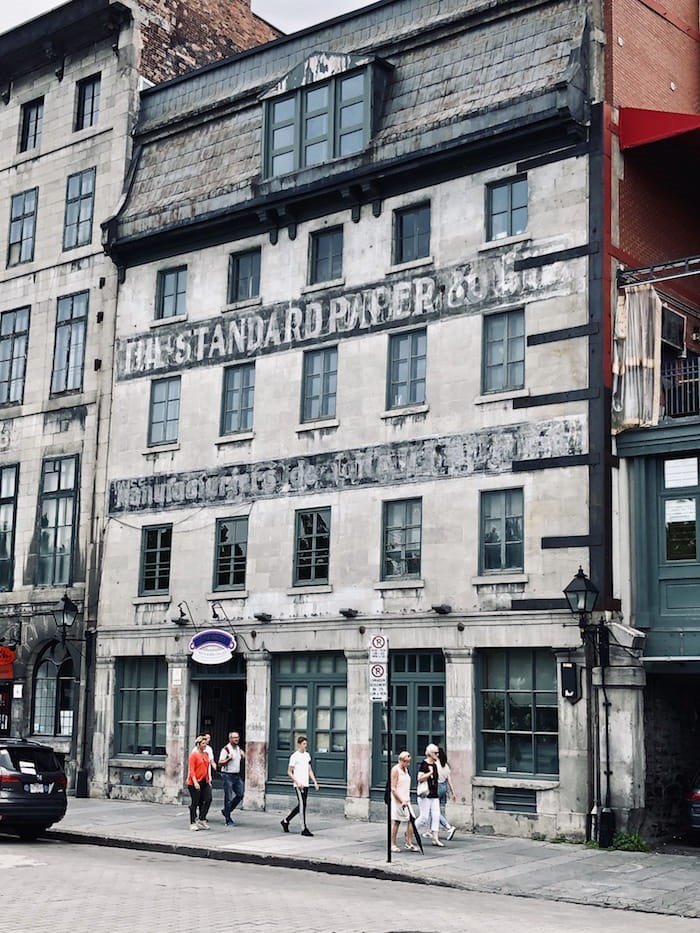 Old meets new in the Old Port of Montreal. Photo by Lindsay William-Ross/Vancouver Is Awesome

For some family-focused fun, the Old Port is also home to the Montreal Science Centre. The two-storey facility is packed with hands-on activities for the whole family, in French and English, as well as an IMAX theatre and special exhibit space.

Keep an eye out for fun things like special events and festivals using the Old Port space, and you also might even catch some Colonial-era soldiers in full regalia drumming and marching their way through the streets. Cross the street and roam the boutiques inside Bonsecours Market, and have your camera ready to capture the incredible architecture as you walk around - with many buildings still bearing signage from decades or more ago. 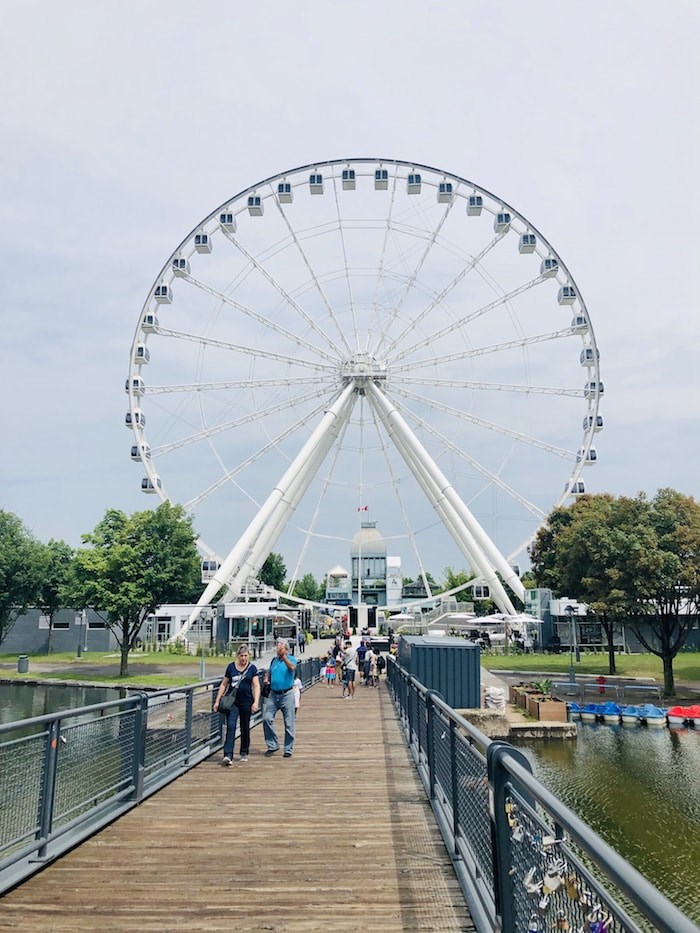 La Grande Roue in the Old Port of Montreal. Photo by Lindsay William-Ross/Vancouver Is Awesome

But the best way to see Montreal, including the Old Port, is from up above in La Grande Roue - the Big Wheel. Soar 60 metres up, year-round, in this enclosed ferris wheel that offers panoramic views of the city and the St. Lawrence and surrounding communities. You won't regret going for a spin on Canada's largest observation wheel.

Come to Montreal hungry, is my best advice. This is a city that loves food, and while terrific food of all kinds can be found on virtually every street, if you're short on time, you've got to prioritize.

I had three meals (and some snacking) to enjoy in Montreal, so I took the "divide and conquer" approach. No - I didn't send my son somewhere else, or divide myself in half (I wish!) but rather I made my decisions based on meeting some basic criteria. I wanted as many iconic foods as possible, I wanted to see and try some locally-grown or made foods, and I wanted to have a nice meal somewhere relatively buzzy. 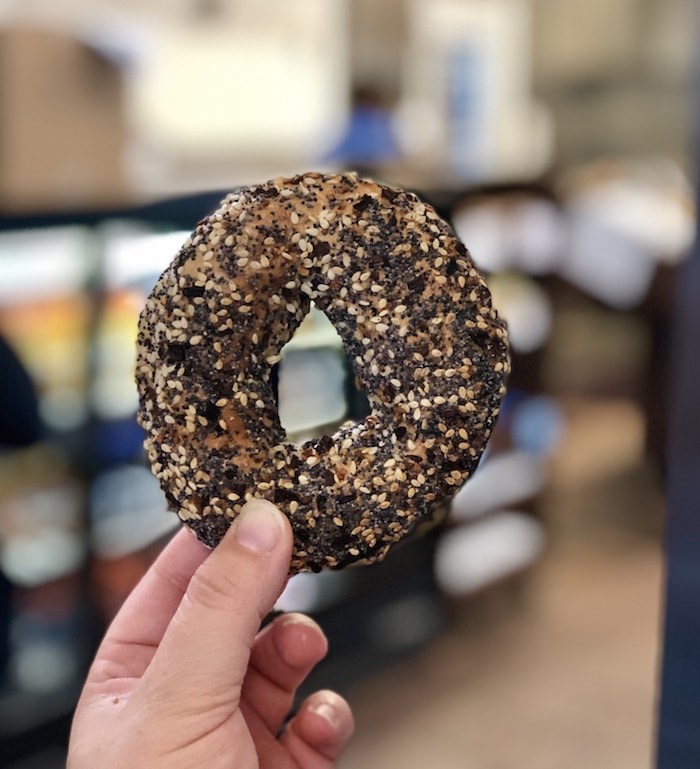 An everything bagel inside the flagship St-Viateur bagel shop in Montreal’s Mile End. Photo by Lindsay William-Ross/Vancouver Is Awesome

When it comes to iconic Montreal foods, the bagel may well be the first thing that comes to mind. The city's bagel wars are well-documented, and I went with St-Viateur, opting to have a quick, affordable, and relatively light bagel breakfast at their Mile End shop on St-Viateur proper. This is their original location, opened in 1957, and it is small and designed for you to pop in and out with your bagel(s) and spreads, or, if there's a torrential downpour going on, to hover in their tiny front window area while you nosh.

Their flagship St-Viateur location is open 24/7, and while the customer service is notoriously gruff, all is well because their bagels are fresh-baked and wonderfully delicious. Take note: It's cash only here. 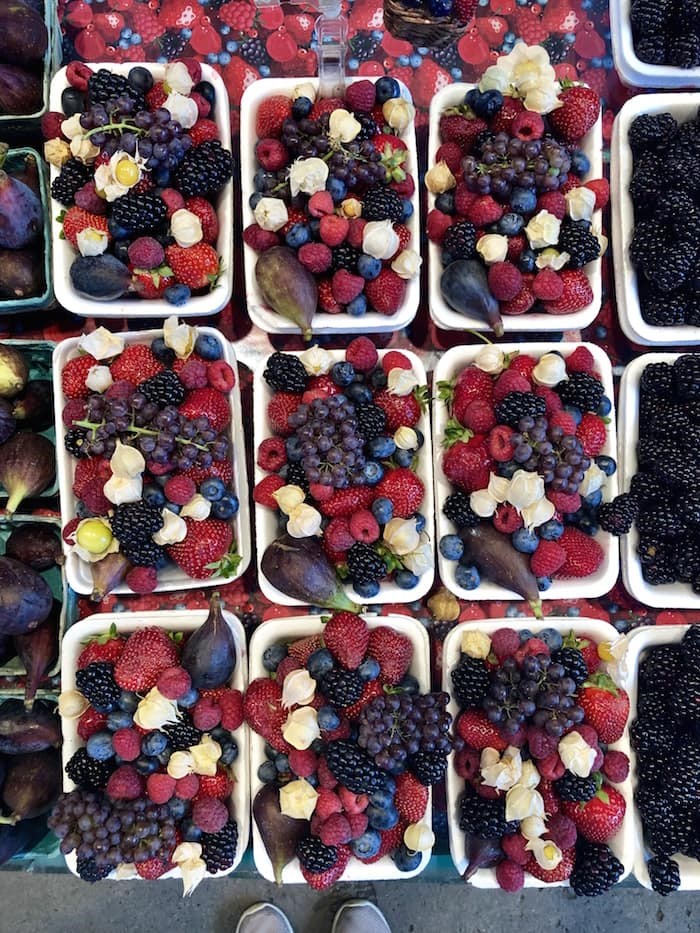 To get a good sense of the local produce and products, from St-Viateur you're not too far from Marché Jean Talon in Little Italy. The open-air (but covered) market features a centre space comprised mostly of farmers' stalls, and small food businesses at the perimeter. You can get things like seasonal fruit and veggies from the region and beyond (in the summer, look for beautiful Quebec strawberries in cardboard baskets, for example), along with things like cheese, meat, pastries, juice and cider, seafood, oysters, breads, and much more.

For those who manage to save room for lunch after roaming Jean Talon, and who want to get a staple Quebecois dish in their bellies, poutine is what's for lunch. We're talking meal-sized plates of fully loaded fries with cheese curds, gravy, and a mess of toppings, all to be found at the legendary La Banquise.

Another Montreal classic, La Banquise has been open since 1968, though it wasn't until a bit later when they became beloved for their poutine. Get it heaped with you name it - bacon, ground beef, Montreal smoked meat, onions, mushrooms, sausage, fried pickles, guacamole - they have about 30 poutines on the menu. 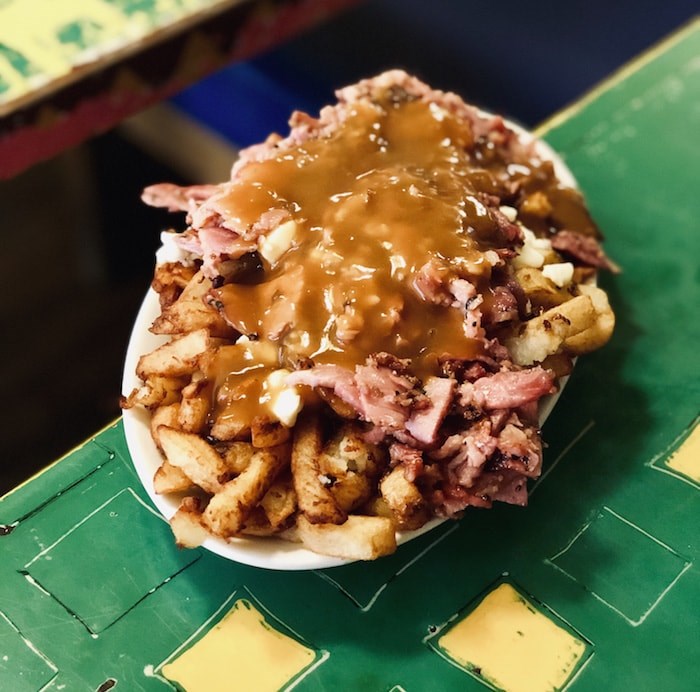 When it came down to the last category on my list, something kind of buzzy, I opted to have dinner at Monarque. Located within walking distance of my hotel (as were many of the restaurants Eater Montreal chose as the Essential 38 of Summer 2019, which, along with the advice of some trusted food-loving friends, informed my choice) this spacious restaurant offers a more casual front brasserie-style dining section with more formal dining in the back.

Monarque is a boisterous but genteel spot, suitable for every kind of dining experience, from dates to friend outings to even family dinners (just maybe don't hand your three-year-old the point of sale machine for them to pull the printer tape from, like the table next to ours - yikes!). Their food is elegant and approachable, showcasing traditional and modern techniques with plenty of regional ingredients. We nibbled on cheesy gourgeres before diving into a beautiful trout tartare, lamb ravioli, and a juicy pork chop for the main event.

Getting there and around

Montreal's main airport is YUL - Pierre Elliott Trudeau International Airport, served by major airlines like Air Canada and Air Transat. Rent a car from the airport, or use STM - Société de transport de Montréal to get around by metro (subway) and bus. 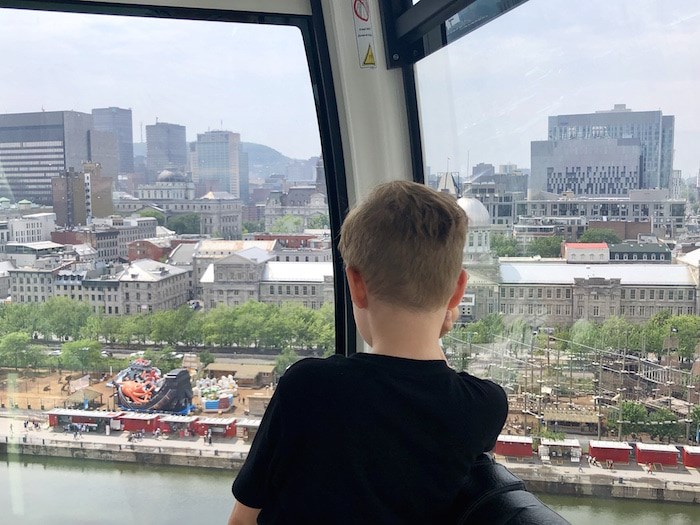 Views of Montreal from up in La Grande Roue. Photo by Lindsay William-Ross/Vancouver Is Awesome

Want to see more of our trip to Montreal? Check out my Instagram Story Highlights "MTL" for the whole trip in photos.

Thanks to Tourisme Montreal, Tourisme Quebec, and the Old Port of Montreal for their assistance with facilitating portions of the this trip. All opinions are those of the author's and were not guided or influenced in any way.