Bavarians at the gate: Strike up the oom-pah band for a trip to Leavenworth

Have you ever been to the surreal mountain town of Leavenworth, Washington? I’ve visited the Evergreen State hundreds of times but have somehow, someway, never been to this bustling faux-Bavarian hinterland until last weekend.
0
Aug 20, 2019 4:12 PM By: Grant Lawrence 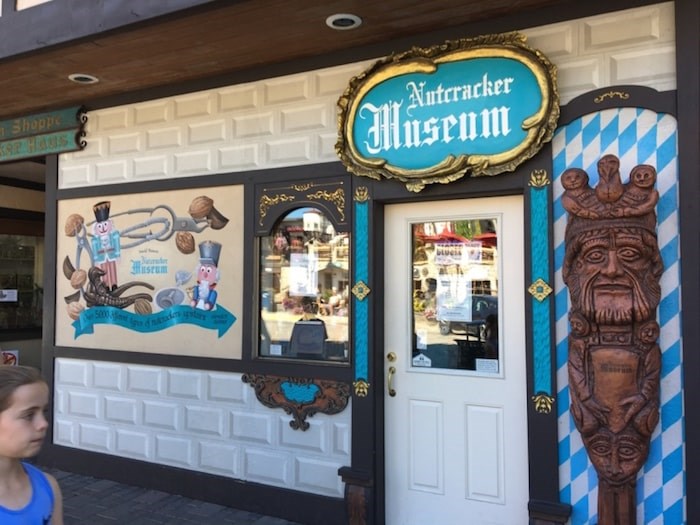 Down on its economic luck in the 1960s, Leavenworth transformed itself into a doppelgänger for a Bavarian village, with complete buy-in from its citizens and local businesses. Photo Grant Lawrence

Have you ever been to the surreal mountain town of Leavenworth, Washington? I’ve visited the Evergreen State hundreds of times but have somehow, someway, never been to this bustling faux-Bavarian hinterland until last weekend. When I arrived, I didn’t know what to think.

Leavenworth is an out of the way mountain village built on the shores of the Wenatchee River, nestled deep in the gorgeous, forested valleys of the Cascade Mountains. Back in the 1960s, after the town had fallen into a lasting depression from declining lumber and railroad economies, a group of local residents rallied together to save Leavenworth in a very Americanized way (at the time, the unofficial slogan was “Leavenworth: Worth Leaving”).

Like Las Vegas, Branson, Missouri or the “Monorail” episode of the Simpsons, the citizens of Leavenworth decided their town needed a major boost in tourism. Because of the surrounding picturesque mountain peaks, they transformed Leavenworth into a doppelgänger for a Bavarian village. Fifty years later, the absolute buy-in of every business and building in town is shocking, and even a bit unnerving.

You could argue Leavenworth’s theme town concept is dated, since we now appreciate the Pacific Northwest for what it is — stunning nature supreme — not what it may resemble from some other continent. But the Bavarian gedenkenexperiment has proven to be a tourist boom for more than half a century.

To get to Leavenworth, you turn off the I-5 South in Everett, onto the much smaller and pleasant Highway 2, which leads you into the mountains, past tiny Sasquatch-themed drive-thru java shacks and alongside gorgeous white water rivers.

After about two hours, around one more picturesque bend, you suddenly come into Leavenworth, which was at one time Washington’s number one tourist attraction. 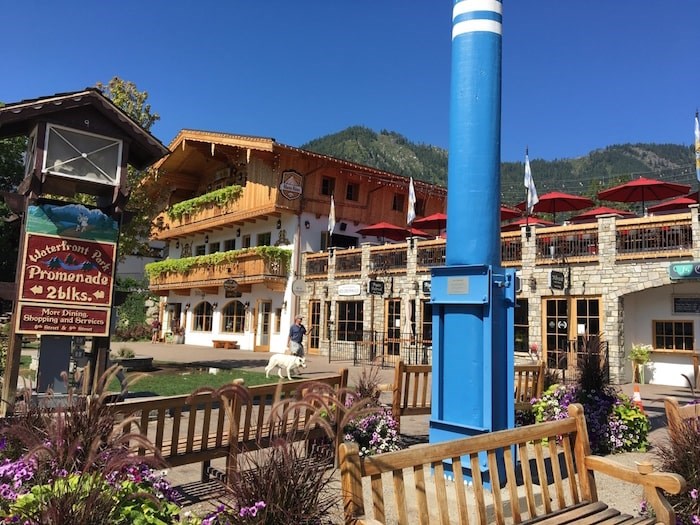 Every building in Leavenworth is done up in Bavarian chalet style. Photo Grant Lawrence

At the entrance of town, you’re greeted by a waving Woody Goomsba, Leavenworth’s giant Nutcracker mascot, and a large wooden sign that reads “Willkommen in Leavenworth” in an old-world Walbaum Fraktur font that is omnipresent on every sign and logo throughout the village.

The only thing that clues you to the fact you have somehow not magically transported yourself to Bavaria in the 1880s is the traffic jam of SUVs lining every street.

While oom-pah bands honk out festive tunes under colourful bandstands, throngs of American tourists crowd the sidewalks of Leavenworth, clad in flip flops, shorts and sleeveless tank tops, many of which sport bold, modern-font messages such as “Sleeves are for sissy babies,” “Take me to the beach, bitch!” and “Let’s vote Trump in for another four years and watch the Democrats squeal like the pigs they are.”

And everything in Leavenworth, even major chains such as McDonalds, Safeway and Subway, are done up in Bavarian chalet style. It’s like you’ve woken up in a Beer Hall Putsch episode of The Twilight Zone. Speaking of Safeway, I popped in for a few supplies and was stunned to find the large grocery store absolutely packed, with massive lineups at every check out line, carts stuffed with supplies for the weekend.

Leavenworth also boasts a staggering amount of festivals throughout the year, including Ice Fest, Bird Fest, Wine Fest, Sausage Fest, Salmon Fest, Autumn Leaf Fest, Christmas Lights Fest and, of course, the grand poobah of them all, Oktoberfest. My reason for visiting Leavenworth? A beautiful family wedding at the nearby Mountain Springs Lodge.

Besides the Bavarian theme, Leavenworth has also embraced its natural surroundings. In the winter you can ski and snowshoe, and in the summer you can mountain bike and hike, as well as tube down the winding Wenatchee River, which offers views of towering mountains on all sides.

My six-year-old son and I did the float, which was a great experience, if you can tune out the stag parties bobbing drunkenly down the river in giant flotillas of inner tubes, leaving trails of empty beer cans in their wake and causing me to wonder if our trip had coincided with Sausage Fest. 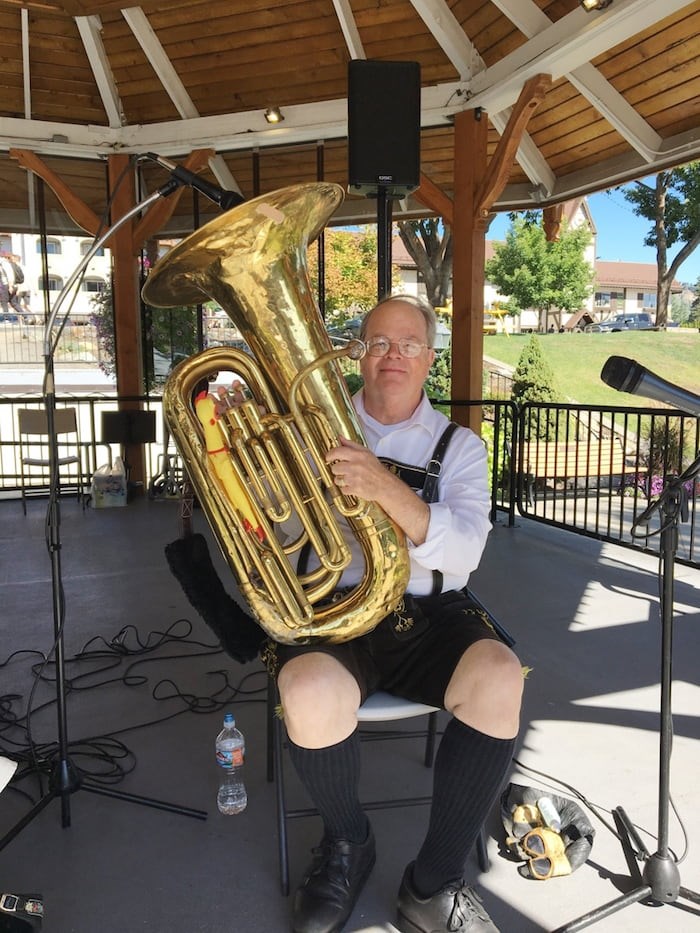 One of Leavenworth’s strangest and most popular attractions is the Nutcracker Museum. For $5, you can gain entrance into this bizarre world of wooden wonders, housing more than 7,000 nutcrackers, some of which date back more than 1,000 years. Others crafted in a more recent and culturally insensitive time in history and done up in black face arguably fall into the 2019 category of “should this still be on display?” 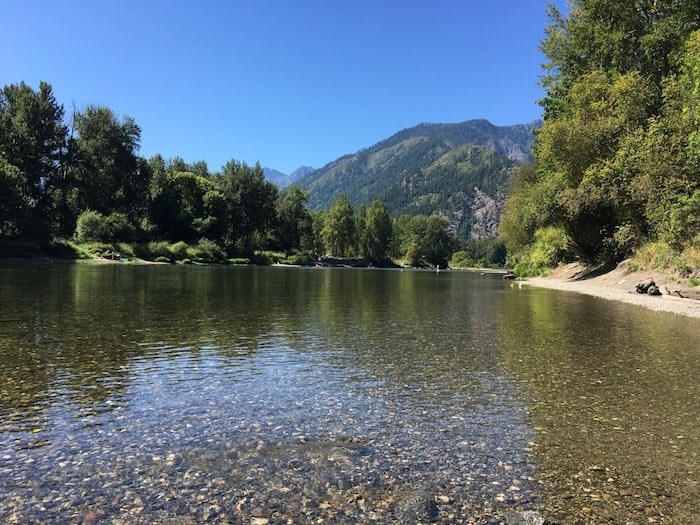 Besides the Bavarian theme, Leavenworth has also embraced its natural surroundings. In the summer you can tube down the winding Wenatchee River, which offers views of towering mountains on all sides. Photo Grant Lawrence

And while you can get a frothing beer stein and a slab of Weiner schnitzel almost anywhere in town, there are some other notable shops worth your visit, such as A Book For All Seasons, a great independent bookstore. Next door you’ll find Whistlepunk Ice Cream, serving high quality, handmade eiscreme. Down the street, you’ll find Local Yokels, one of the only non-Germanic outlets — a great hole-in-the-wall café offering many fresh products from the owners’ farm. My wife and I also enjoyed the service and quality of the Bavarian Lodge where we stayed, the front of which was covered in bright purple flowers.

If your wanderlust ever takes you across central Washington State, try Highway 2 instead of the I-90, to discover the weird world of Leavenworth for yourself.

Feds will not require airlines to offer full refunds to ticket holders for cancelled flights
May 29, 2020 2:48 PM