City slicker charmed by the wilds of Port Renfrew

When my wife and I planned a weekend winter getaway to Port Renfrew on the southwestern edge of Vancouver Island, we received a lot of confused reaction.
0
Jan 30, 2019 3:51 PM By: Grant Lawrence

When my wife and I planned a weekend winter getaway to Port Renfrew on the southwestern edge of Vancouver Island, we received a lot of confused reaction.

“Well, have a great weekend in Port Alberni,” replied another. 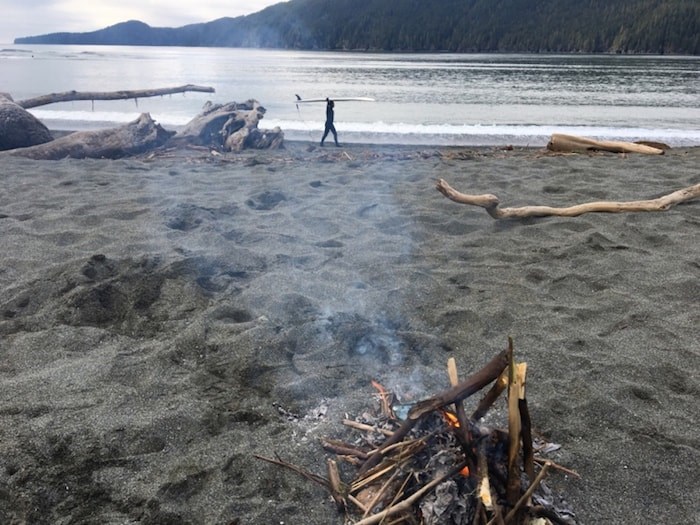 Surf’s up in Port Renfrew (Photo by Grant Lawrence)

We ran into friends on the ferry who wished us well on our journey to Port Hardy.

No one really knew where Port Renfrew was, or why we wanted to go there, including our children.

We were simply looking for a quick retreat to somewhere coastal, relatively easy to get to and where we had never been. Port Renfrew checked all those boxes.

Many of the “Port” and “River” cities along our coast have long been considered working class towns, but the reality is that stunning natural beauty surrounds all of these resource-based locations (Port Renfrew has traditionally been a logging town).

Experienced hikers will know Port Renfrew as the key junction between the world-famous West Coast Trail to the north and the lesser-known Juan de Fuca Marine Trail to the south.

To get to and from Port Renfrew, we decided on the Pacific Marine Circle Route, which meant never having to backtrack. We hopped the morning boat from Tsawwassen to Swartz Bay, swung by Victoria for some vintage Miniature World action with the kids, then embarked on the easy two-hour drive up the Juan De Fuca Highway (also known as West Coast Highway 14), which wound through Sooke and the small, year-round surfing village of Jordan River.

As the road led us up the ridge, we were treated to glorious views of the setting sun over the Olympic Peninsula and the Juan de Fuca Strait thanks to some admittedly well-placed clear-cuts. 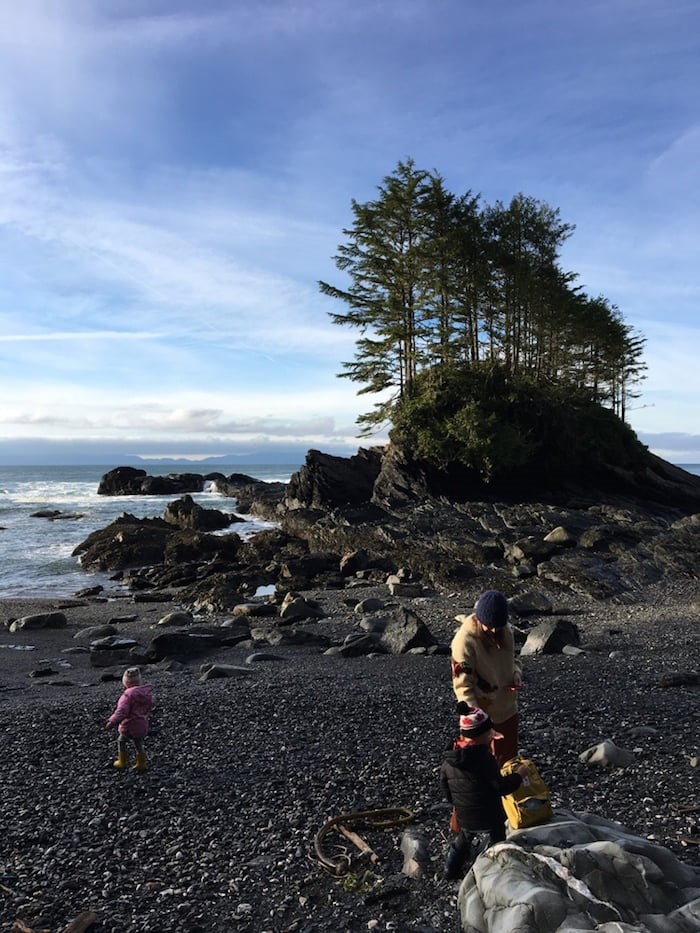 With mildly complaining kids in the backseat, we rolled into tiny Port Renfrew at twilight and quickly scouted out the scene. The town is located on the southern shore of a huge bay called Port San Juan, into which the San Juan and Gordon rivers empty.

In Port Renfrew, which has recently rebranded itself “Canada’s Tall Tree Capital” (more on that in a bit), you’ll find a somewhat spartan general store open every day from 11 a.m. to 7 p.m., a small gas station offering only regular and diesel and a few restaurants along the southern shore. And that’s about it.

We stayed at one of the teeny, tidy and relatively new cabins that were part of Handsome Dan’s vacation rentals, a local success story that started with one seaside cabin and has now expanded to several dozen, on a property that’s something like a cross between a suburban subdivision and a wilderness camp. Our cabin was cozy and suited our needs well, but was pricey for the off-season.

We woke up early the next day to check out the nearby Botany Bay and Botanical Beach, a three-kilometre looped trail that leads you down through a picturesque coastal rainforest. Our kids both got excited when they realized they could soon hear the roar of the ocean.

Emerging from the forest onto sunny, gorgeous Botany Bay was a sight to behold: we watched in awe as giant waves from the open Pacific Ocean exploded into white sea foam, pouring over black rocks as the rush of water rearranged the smooth, flat pebbles on the beach with each earthly push and pull.

The trail then led us through a spectacular shoreline forest to the wide and fascinating Botanical Beach, which kept the kids interested for hours as they explored the tidal pools, rock formations, giant kelp vines and driftwood that had washed ashore. 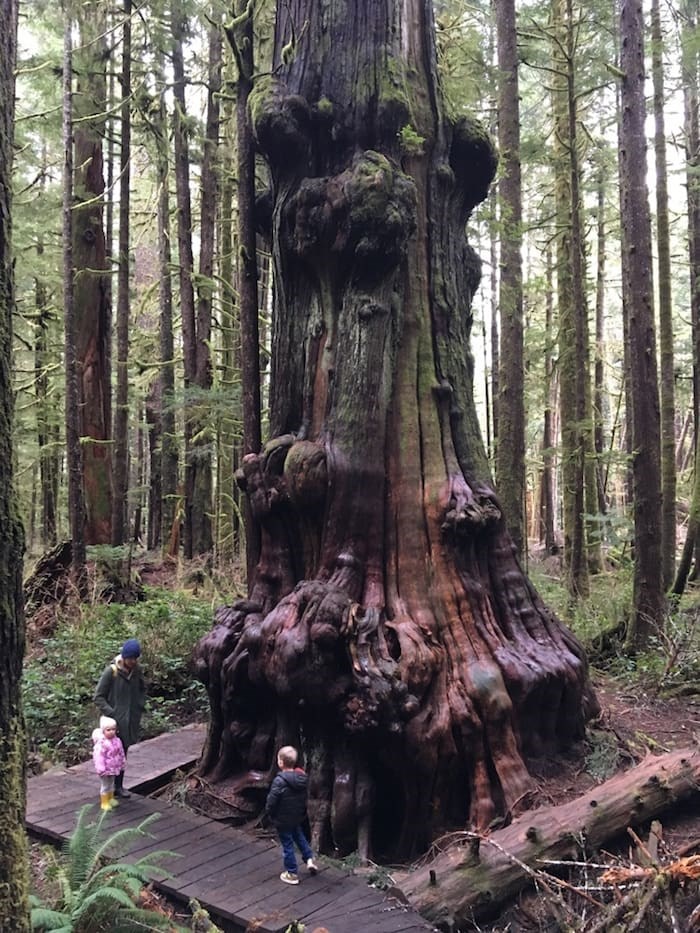 The next day, we decided to check out the much talked about Avatar Grove, a remarkable stand of some of the oldest, biggest and gnarliest trees in the entire country, which are located just a short drive from Port Renfrew, up a hard scrabble gravel road that was slow-going for our city vehicle.

The fact that Avatar Grove actually exists is thanks to the Ancient Forest Alliance, a group that formed to protect this area, which was marked for logging as recently as 2009. When the Alliance made their old-growth findings public, interest in Avatar Grove (yes, named after the fantasy forest in the James Cameron movie) exploded internationally, which pressured the provincial government to officially declare a 57-hectare parcel above Port Renfrew as off-limits for logging.

Some of the gigantic cedars and spruces are estimated to be 1,000 years old. The trails to the trees on either side of the logging road offer stairs and boardwalks, but it is a wilderness terrain that is steep, rugged and constantly wet. Also nearby is Pacific Rim National Park, the Carmanah Valley and Big Lonely Doug, Canada’s second-largest Douglas fir that stands alone in the middle of a clear-cut.

Back in town, we ate at the cozy and happening Renfrew Pub (our favourite); Bridgemans West Coast Eatery, a tasty food truck that has expanded into a spacious, bright restaurant built on pilings over the water; and Tomi’s, the place locals go for yummy breakfast and lunch, which makes up for semi-stand-off-ish service. 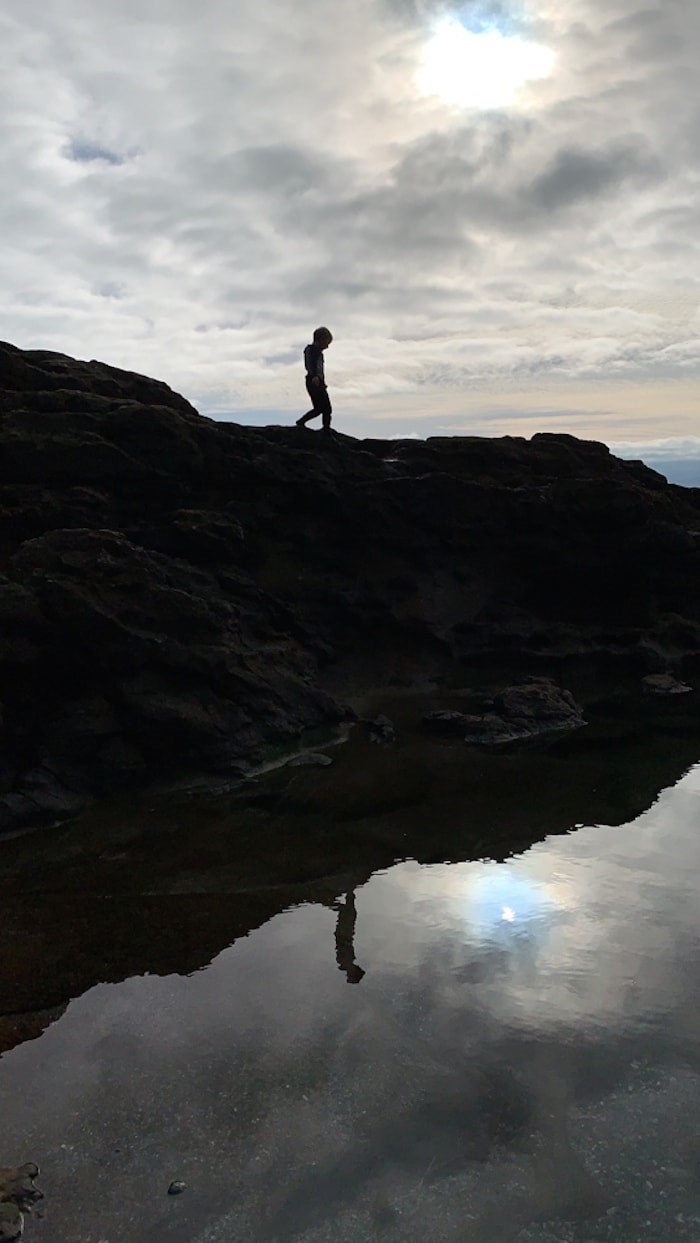 Our last stop during our Renfrew retreat was at the sprawling and sandy San Juan Beach, part of the local Pacheedaht First Nation territory. Surfers dotted the break while others bundled up to stroll several kilometres of sand, filled with sun bleached driftwood sculptures backed by a wall of towering Sitka spruce.

When it was time to head home, we continued on the Pacific Marine Circle Route, which took us inland to Lake Cowichan, eventually meeting up with the Island Highway in Duncan. We made our ferry reservation in Nanaimo with three minutes to spare, fully satisfied with having taken a chance on Port Renfrew.