I went whale watching in B.C. for the first time and it was life-changing (VIDEO)

I've watched the video on my phone and where I posted it to my Facebook page at least two dozen times in the day or so after I recorded it.

The video shows a family of three Bigg's killer whales, also known as orcas or Transients, moving in a tight trio, surfacing in unison as they approach our small, open-air boat in the Strait of Georgia. The whales are gliding and diving just feet from the boat until those on board - including me - realize they are going to swim right under us. They do and then emerge on the other side, making a turn and carrying on their way.

You can hear me in the video making exclamations in a high-pitched and shaky voice. If I hadn't been sheathed in a heavy full-body floatation safety suit, I'm sure I could have seen the hair on my arms stand it. It was incredible.

While I'm glad I've got the video evidence (at hour three of the boat tour some of the half-dozen other passengers aboard had run out of battery), I don't think I will ever shake that sight from my memory for the rest of my life.

And I never, ever, thought I would be so moved by a whale-watching boat trip. ("Like, ever," to borrow from Taylor Swift's early pop foray.)

The four-hour tour was conducted by Ocean EcoVentures out of Cowichan Bay on Vancouver Island. The small family-run business offers several tours, which focus on the Southern Resident Orca Whales, Transient Orca Whales, Humpback Whales, Grey Whales and Minke Whales, along with seals, birds, and more.

In fact, Ocean EcoVentures says they yield the highest volume of orca sightings among tour outfits operating on Vancouver Island. That's quite a promise!

Before I boarded the Zodiac with my son, five other tour riders, Captain Gary Sutton, and one other staffer/whale enthusiast doing some tracking on her day off, I hadn't given much thought to whale watching. Booked on the tour as part of "fam" (short for familiarization) visit to the Cowichan region arranged for me by several tourism entities, I found myself scrambling to make it to the Ocean EcoVentures offices on time after our nearby lunch went over the scheduled time. We'd hustled so fast down the block I hadn't had the chance to even stop at the car to grab our bottle of sunscreen; due to COVID-era safety protocols, the tour company can't share out sunscreen to forgetful folks like me. Pro-tip courtesy my now-peeling sunburn: Always remember the sunscreen!

Speaking of COVID-19 precautions, there are a number of measures in place at Ocean EcoVentures. Masks are required while onboard the zodiac, as the rows are close together and don't allow for physical distancing. Distancing is enforced during check-in, as well as on the dock when you put on and take off your floatation device suit. Those suits are fallowed for a full 48 hours between use. Hand sanitizer use is required at check-in and is available at any time.

Sutton, who led our tour, is not just a captain and guide, but a whale researcher who helps track the marine mammals in the region. He photographs all of the sightings and can identify the whales by their markings. 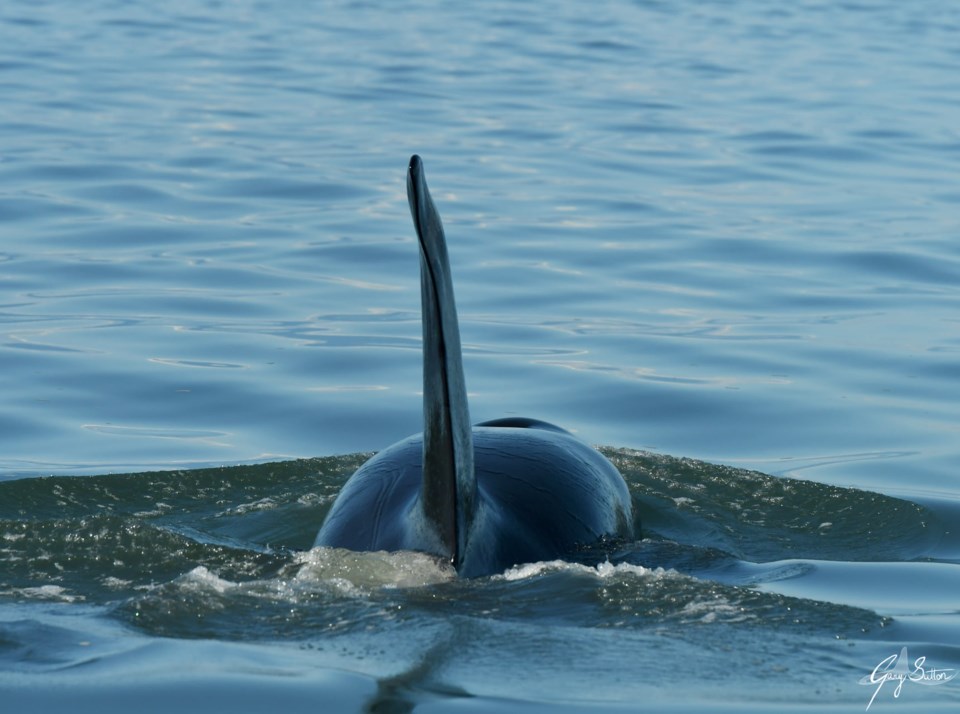 He's also a fountain of knowledge and has lots of insight and background information to share about orcas and whales not just in B.C. but around the world. He even played us a recording on his cellphone of a male vocalizing his 'whale song' he recorded on a dive. Sutton also knows precisely which whales we were viewing by their lineage and official name (for example, it was T100C, T100E and T100F that came up and under our Zodiac).

Our trip began from picturesque Cowichan Bay, on a day when enthusiasts, like Sutton, were chattering excitedly about the possibility of the whales being close to the shore and marina in the area. It's not uncommon for Bigg's killer whales to hug the shore when they are on the hunt for food, though it is rare to see them so close to boats and docks. Rather than zipping out into the open water, we kicked things off by motoring more leisurely right in the vicinity of the dock and soon spied the first group of orcas we would watch.

This group was led by 27-year-old T065B who was with her two kids patrolling the bay for seals.

Bigg's killer whales will dive and stay under for around five minutes, and then surface - with a puff from their blowhole - a handful of times in succession. We followed T065B and her kids quite a distance down the shore from Cowichan Bay, snapping our cameras and cellphones furiously with each surfacing. 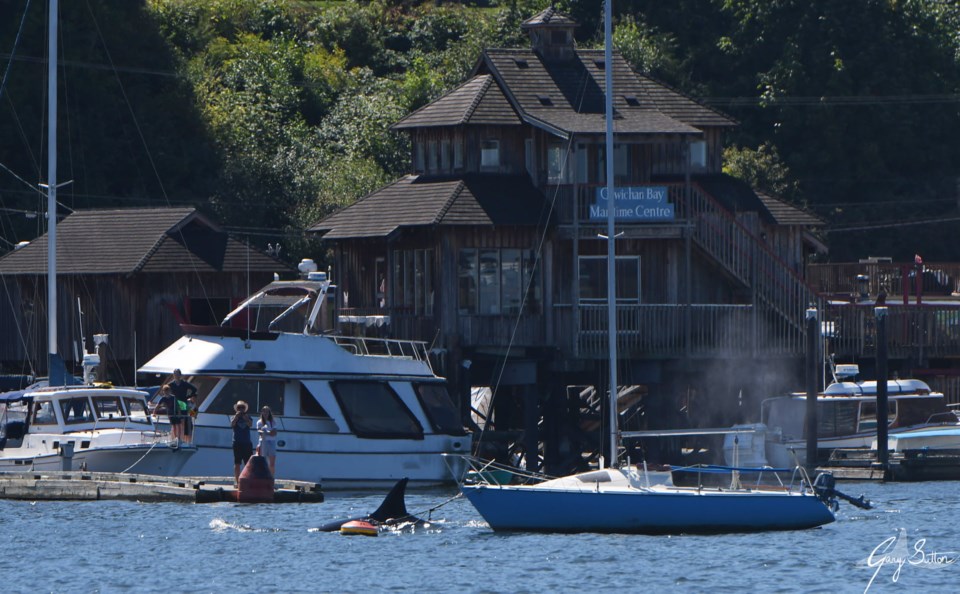 Because tour operators keep in contact with their colleagues who are also on the water in the area at the same time, Sutton got word that there was another grouping of orcas closer to the mainland. Conditions were great, so we whizzed all the way to where the Fraser River meets the Strait of Georgia, passing by several of the Southern Gulf Islands along our way. Hard to fathom that on our vacation to Vancouver Island we had suddenly found ourselves pointing at the Tsawwassen Ferry Terminal, where our trip had gotten underway the day before. It was the strangest feeling of being so close to home but in another world, almost, entirely.

The water was glassy and the sun high in the sky - though the smog hanging over Metro Vancouver was a little distressing. I had no idea just what a special place we were until Sutton shared with us just how significant and rich the Strait of Georgia's ecosystem is. According to the Georgia Strait Alliance, it "is among the most biologically productive marine ecosystems in the world, providing critical habitat for a huge diversity of fish, marine mammals, invertebrates, shorebirds and marine plants."

We joined several other whale-watching outfits as we circled around where the orcas were diving. Sure enough, we spotted T100C, T100E and T100F and watched them awhile, motor off. That's when they turned toward our boat and went under and around it - and I was awestruck. Learning about how these whales live, move around the world, hunt, mate, and survive was eye-opening.

Back on the water, our tour wasn't over yet - we were also on the lookout for some humpbacks in the area, and we spotted them minutes later. These are massive, majestic creatures. Humpbacks are migratory and are also the largest whales you'll find in the waters off Vancouver and Vancouver Island. Seriously, they are big - they average around 50,000 to 80,000 pounds. Of course, when you are spotting them (you puny human, you!) from aboard a whale-watching boat, what you see on the surface as they dive and wave and slap the water are just flashes of their fins. 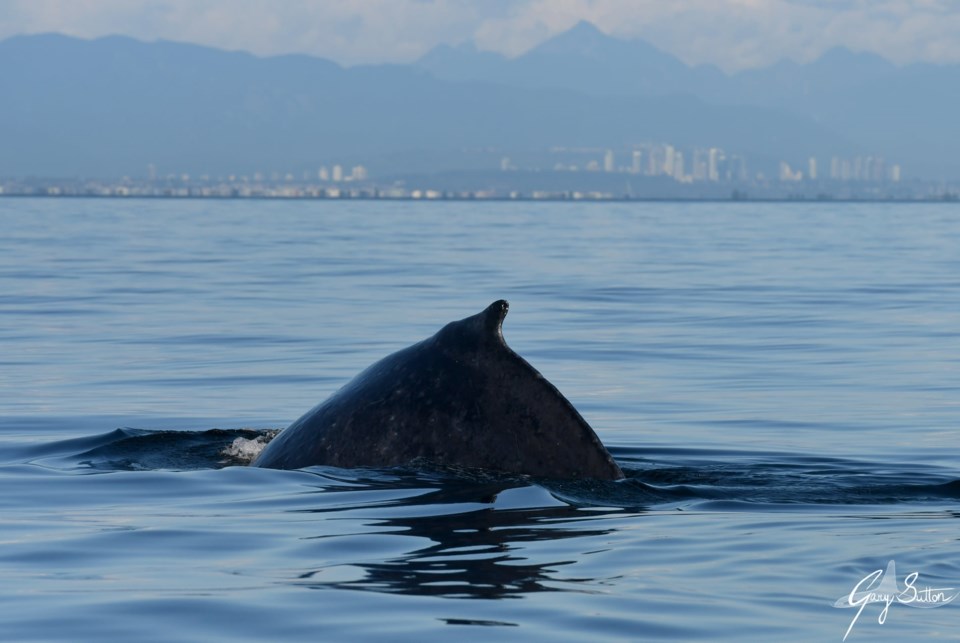 A humpback in the Strait of Georgia, Aug. 27, 2020. Photo by Gary Sutton via Ocean EcoVentures/Facebook

Watching these whales move through the water so close to us was unforgettable and very moving.

And moving was what we had to do next because our trip had taken us so far from Cowichan Bay, we had to make our way back, stopping only to visit some Steller sea lions sunning themselves drowsily off Galiano and Valdes Islands. It was a beautiful ride back, passing the flanks of the forested islands with the summer sun streaming down on us. British Columbia is a beautiful, special place.

I returned to the dock forever changed. Not only did I instantly become the person who wants to tell you about that time I went whale-watching, but also because I now have a deepened appreciation for the incredible whales that travel our waters, and the work that is constantly being done to protect them.

Ocean EcoVentures got back into the waters this spring after taking a pause in the face of the COVID-19 pandemic. You can find out more about their half- and full-day public tours and private charters here.

Will this Full House star be allowed to film in Canada after serving time for a felony? A Vancouver lawyer weighs in
Aug 9, 2022 5:14 PM

These B.C. small towns are downright charming and don't get enough attention
Aug 9, 2022 8:03 AM
Comments