The world's tallest gnome is in B.C., but he needs a new home ASAP

Fans of Howard, the world’s tallest gnome, are campaigning to find a new home for the beloved Nanoose Bay, B.C. landmark, which is in need of life-saving repairs.
0
Mar 5, 2019 10:11 AM By: Times Colonist

Fans of Howard, the world’s tallest gnome, are campaigning to find a new home for the beloved Nanoose Bay, B.C. landmark, which is in need of life-saving repairs.

“He’s got a rotten base,” said Bridget Matewish, granddaughter of Ron Hale, who built the gnome.

“He needs some repairs, which we are willing to do. We don’t have a problem with that. We’ll fundraise money. We’ll get volunteers.” 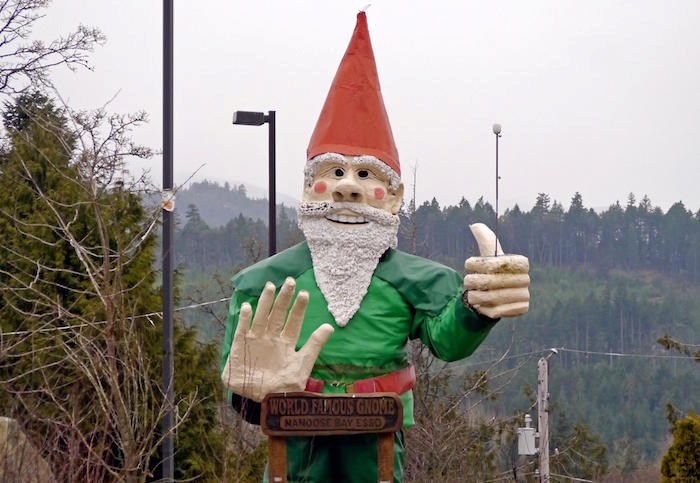 But the 7.91-metre-tall gnome, recognized by the Guinness Book of World Records as the world’s tallest in 2012, is facing a deadline. Its current owner, Parkland Fuel Corp. of Calgary, has said the roadside attraction must be removed by the end of April or it will be dismantled, Matewish said.

She estimates repair and relocation costs could reach $20,000, depending on whether the gnome is fixed to a concrete base or onto a trailer.

A Parkland spokesperson could not be reached Monday.

The friendly giant gives a thumbs-up to motorists at the Nanoose Bay Town Pantry and Chevron gas station at 1660 Island Highway, between Nanaimo and Parksville.

Howard was first erected in 1997 or 1998 for the now-closed family-run amusement park Kiddieland, renamed Gnomemansland. In its heyday, the park attracted up to 25,000 visitors a year.

Ron Hale based the gnome on a story book illustrated by his wife, Disa Marie Hale, an artist, Matewish said.

The name Howard came from a long-time employee, she said.

Built in four parts, the gnome, which stands on a trailer, was crafted out of foam, steel, papier maché, ice cream buckets, bleach bottles and dryer felts from the Port Alberni pulp mill.

Raising the gnome led to conflicts with the Nanaimo Regional District. It was first set up on a concrete block across the driveway from the park, on land owned by another member of the family.

After the regional district cited Hale for breaching its sign bylaw, Howard was moved across the driveway onto Hale’s own land.

But the district worried it could blow over in a strong wind.

Hale eventually developed a service station on his park property and Howard has since spent years waving at passersby.

The land, including the gnome, was sold in about 2006, said Matewish, who noticed a caution tape around Howard about four or five months ago.

She contacted Parkland and came to an agreement that would have seen the company pay for repairs led by the family. The gnome would have stayed put.

But a company representative contacted Matewish about a week ago, saying that plan could not proceed, for legal reasons. Instead, the gnome would have to be removed by April 30.

Howard’s plight has struck a chord with those who love the gnome — social media posts about the situation have been shared thousands of times in just a few days.

Suggestions are pouring in, with some recommending new sites at other tourist attractions, while others want Howard on their own properties overlooking the highway.

“We’ve had so many offers from places that would like to have him,” Matewish said. “It means a lot to us.”

Ideally, the family would like Howard to stay put.

But given that appears unlikely, “We just want him in a home where he can be enjoyed by the public still. People can still take photos with him.”