The Granville bridge, which now has eight lanes for vehicle traffic, will reallocate two for pedestrians and cyclists. Photo: City of Vancouver

Pedestrians and cyclists traversing Granville Street Bridge will soon have two more lanes' worth of room when making the trip over False Creek.

The cost – for the first phase of the project – dropped from an initial $25 million (which was budgeted for in the 2019 to 2022 capital plan) due to the financial pressures of the COVID-19 pandemic.

The bridge sees a little over 65,000 motor vehicles and over 25,000 trips on six bus routes, with almost 80 buses per hour during peak periods cross, according to a staff report.

However, staff noted, there’s not nearly as much foot traffic on the bridge compared to other False Creek bridges – due to “comfort and accessibility challenges.”

City staff reported that on a summer day, the bridge only sees nearly 2,000 people walk across, a few hundred cycle, and “essentially nobody, who requires using a wheeled mobility aid.” 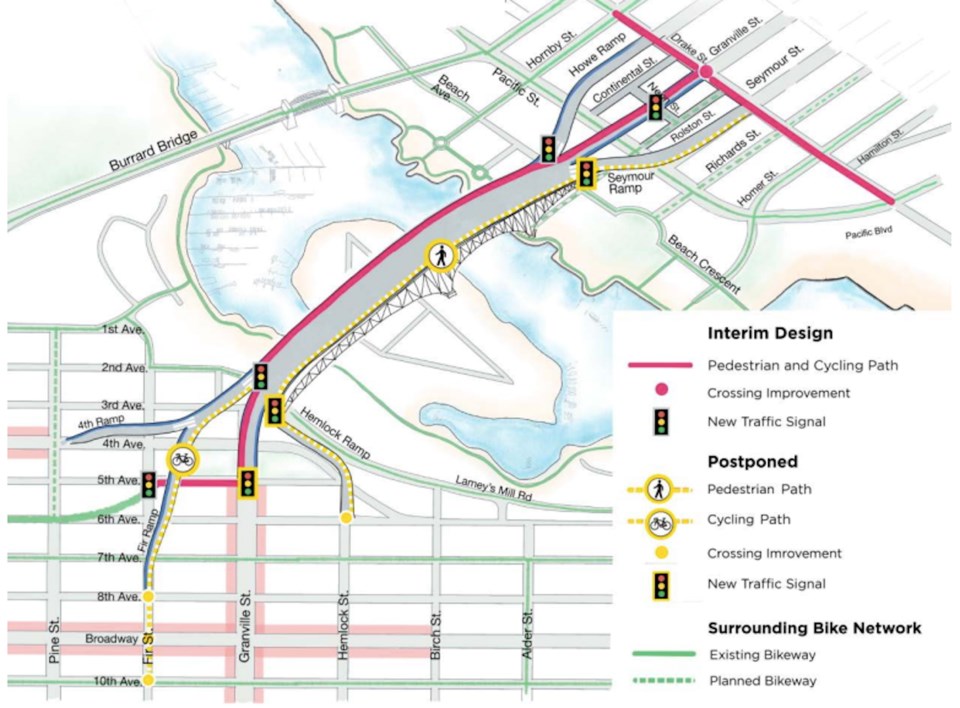 As such, eight lanes are proposed for the bridge – two of which will be used to add space on either side of six-car lanes for cyclists and pedestrians.

This will require temporary cement barriers between cars and cyclists, as well as reallocating two car lanes to the bridge deck – where new traffic signals will be installed for the pathway’s crossings across Fir and Howe Street ramps.

“The pressures on the City’s budget due to the effect of the pandemic are substantial and yet the improvements to the Granville Bridge and Drake Street identified in this first phase are critical to Vancouver,” said Mayor Kennedy Stewart.

“Providing safe, sustainable, and accessible ways to cross the bridge is essential, particularly in light of a growing city and region facing a climate crisis.”

Construction is slated to begin in 2022 on the scaled-back project.

The cost of future phases is dependent on further city council approvals.

Granville Island has painted these physical distancing circles in its parks
Jun 26, 2020 6:30 PM

You can get some of the best foods from Granville Island vendors delivered right to you
Aug 13, 2020 2:13 PM