12 vintage Vancouver Christmas moments to look back on (PHOTOS) 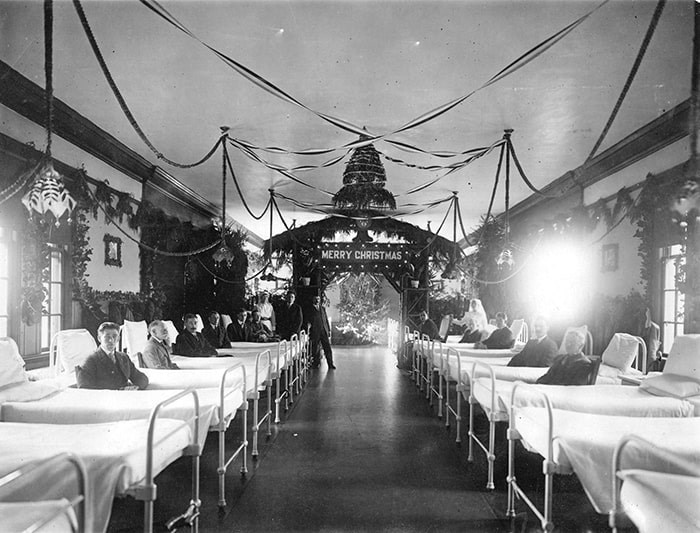 A ward of the Shaughnessy Hospital done up with Christmas decorations in 1920. Photo: Vancouver Archives

Many things change over the years, technology, infrastructure, fashion, the list goes on … but one thing that remains a constant is Christmas spirit.

Vancouver’s love for Christmas and generosity during the holidays can be seen throughout history in the below vintage photos.

1. The Shaughnessy Hospital done up with Christmas decorations in 1920

Vancouver’s Shaughnessy Hospital opened in 1917 as a recovery home for First World War veterans. It went on to serve veterans and civilians of B.C. for more than 75 years. The historic hospital closed in 1993.

The Elks of Canada volunteer organization has been serving community needs across Canada since 1912.

This year marks 100 years since brave souls started taking the plunge into the freezing cold waters of English Bay for the Polar Bear Swim. The swim, now which takes place on Jan 1. was initially held on Christmas Day.

4. The Granville Mansion living room at Christmas in 1930

5. A Christmas cheer drive at Lord Byng Secondary School in 1950

The Pacific National Exhibition fair has been bringing joy to Vancouverites with its annual events since 1910.

The 43rd Grey Cup game was played on Nov. 26, 1955, before 39,417 football fans at Empire Stadium in Vancouver. This was the first time Vancouver hosted The Grey Cup.

The Grey Cup trophy was created by Birks Jewellers and has been part of Canadian sports since 1909, when it was donated by Governor General Earl Grey for the Canadian football championship.

8. Delivering dolls to the Children’s Hospital in 1956

In 1956 Mrs. R.S. Quinn, the chairman of the Home Arts Committee, and P.N.E. President W.J. Borrie stopped by the BC Children’s Hospital to deliver dolls to sick children.

There are many ways to help the sick kids at the hospital. Here’s how you can contribute.

9. The Christmas tree at Vancouver Art Gallery in 1985

Built on the former Shaughnessy Golf Course, the VanDusen Botanical Garden opened to the public in 1975. The beautiful Festival of Lights tradition began 35 years ago and is still igniting festive cheer today. The magical display gets bigger and brighter every year.

Here’s how it looked in the early days …