Dubbed Operation Backup Inspiration as a nod to the Snowbirds event called Operation Inspiration, the 35 aircraft will depart from Abbotsford Airport and fly over Metro Vancouver.
May 18, 2020 2:20 PM By: Stefan Labbé 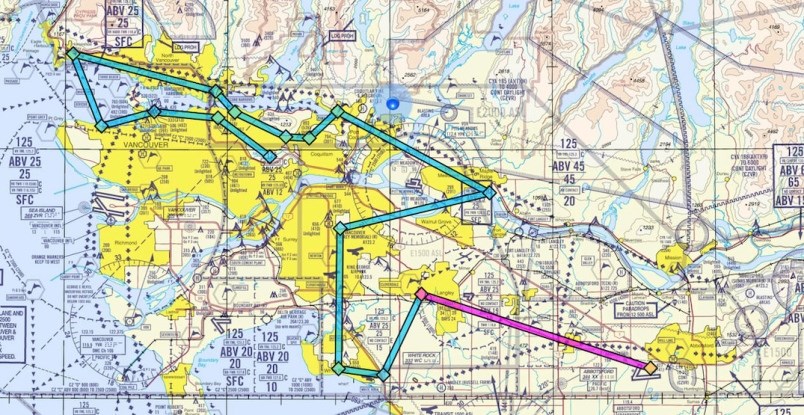 Flight path of Operation Backup Inspiration, a mass flyover set to begin just before 7 p.m., May 18, 2020. Photograph By BC GENERAL AVIATION ASSOCIATION

Dozens of B.C. pilots will take to the skies tonight (Monday) in a mass flyover that will criss-cross the Lower Mainland in a tribute to the Canadian Forces victim killed in a deadly Snowbird crash in Kamloops Sunday.

Dubbed Operation Backup Inspiration as a nod to the Snowbirds event called Operation Inspiration, the 35 aircraft will depart from Abbotsford Airport and fly over Metro Vancouver.

The B.C. General Aviation Association, which is running the event, is timing the flight to coincide with the nightly 7 p.m. cheer for frontline and essential workers.

“These aircraft will not be in any tight formation as we leave that kind of flying to the professionals,” said the aviation association in a written statement, adding only designated pilots contacted by the group are to take part to ensure safety.

The memorial, said the statement, will "pick up where the Snowbirds left off."

A Nova Scotian storyteller, she was a journalist before joining as a Public Affairs Officer.

Across Canada and the United States, she brought stories and smiles.
She was one of us, our sister.

Capt. Jenn Casey, a public affairs officer with the Canadian Forces, died in the incident in Kamloops on Sunday after the Tutor aircraft she was in crashed into a residential neighbourhood.

Sunday's crash happened the same day the Snowbirds were scheduled to make a trip from Kamloops to Comox aimed at boosting the morale of Canadians struggling with the COVID-19 pandemic.

— with files from the Canadian Press