“Why, at such a crucial time with the fentanyl crisis going on, would they cut funding to the one place that is open 24/7?” asked Tim Pittmann, president of the Downtown Society for the Fellowship of Recovering Alcoholics, which operates the Vancouver Recovery Club (VRC) at 12th Avenue and Sophia Street. 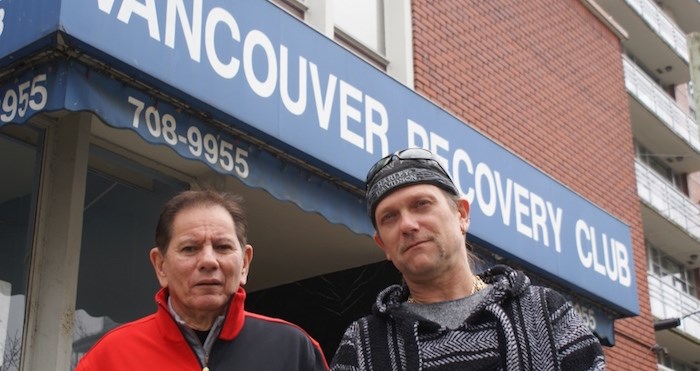 Bill Wong (left) and Tim Pittmann of the Vancouver Recovery Club say the City of Vancouver’s cutting club funding will put addicts’ lives at risk as the facility will no longer be able to operate 24 hours a day. Photo by Jeremy Hainsworth

The VRC has been offering addicts a place to keep warm and providing food, referrals to housing, detox or treatment since 1983, executive director Bill Wong said. It also houses multiple 12-step meetings each week.

“We have thousands of clients that have passed through our doors and have successful lives,” Wong said.

The club has received about $36,000 a year from the city for years, although its funding was cut to $20,000 last year with a warning that funding would end. A new recommendation to council is that the club receive no funding this year. And, said the city, part of the decision stems from the VRC’s financial processes.

The funding loss means the VRC would have to close its doors between midnight and 8 a..m., Wong said.

About 20 people a night come through the doors between those hours.

Wong said the late night hours are often when addicts are waiting for a detox bed to come open so their recovery can start.

“We feed them a hot dog, a coffee and wait for that call,” he said.

Wong said the Saferide program also operates through the facility with funding from Vancouver Coastal Health. It assists police, fire and ambulance crews dealing with addicts to get them to hospital, detox or jail – or to the club at 12th and Sophia so they’re safe off the streets for a while.

With the club closed for those eight hours, said Wong, that assistance to first responders will also vanish – at a much higher cost to the city through wages than the annual funding amount.

Further, he said, late-night 12-step meetings for those seeking help quitting drugs or those already in recovery will have to end.

“The city is recommending groups for this funding that are best able to meet the terms of the grants, and ultimately have the most positive impact on the community,” city spokeswoman Lauren Stasila said in a statement to Glaicer Media.

The club was not recommended for renewed funding because, while it met eligibility criteria, the grants budget is limited and other applications rated higher in addressing city priorities, the report said.

Wong questions that. He said he was told the society would not meet priorities two years ago. He wants to know how city staff can make such an assessment.

Harm reduction activist Garth Mullins said he knows people who rely on the club being there in their times of need.

“We need all the options,” he said. “We don’t need to be nickel and diming services right now.”

The city report said funding priorities fall in line with the Mayor’s Overdose Emergency Task Force, which includes preventing overdose deaths and addressing the social determinants of mental health and substance use.

In a December report to council on the task force, Mayor Kennedy Stewart said, “While the city is not mandated to deliver health services, it has a long standing role in advocating reducing the harms caused by illicit drug use, recognizing addictions as a public health issue, not a criminal one, and promoting access to a wide range of treatment options.”

Stasila said addressing the overdose crisis and saving lives is a city top priority for the city but added the VRC’s “ financial processes have become a concern for city staff.”

“The city advised the Vancouver Recovery Club last year that there would be a potential grant reduction if they could not produce the needed financial information for the city to review its grant application,” Stasila said, adding the grant change will not affect the Saferide program.

The Dugout on Powell Street offers similar social programs but with less focus assisting people move into recovery from addiction. Its funding – which has hovered around the $40,000-per-year level for a decade – will be maintained

The Streetohome program has been recommended for $150,000 in funding.

Since 2008, Streetohome has contributed more than $31 million to supportive housing and homelessness prevention projects. It is also exploring a private-sector role in addressing the root causes of homelessness, including unemployment and addiction.

The report on the funding recommendations was due to go before council Tuesday (March 12) morning but Wong has been told discussion on the funding could go to Wednesday.