Ottawa needs to do more to help make Metro Vancouver housing more affordable, according to a just-released Greater Vancouver Board of Trade (GVBOT) report.
0
Aug 8, 2019 2:55 PM By: Glen Korstrom

Ottawa needs to do more to help make Metro Vancouver housing more affordable, according to a Greater Vancouver Board of Trade (GVBOT) report released today (August 8). 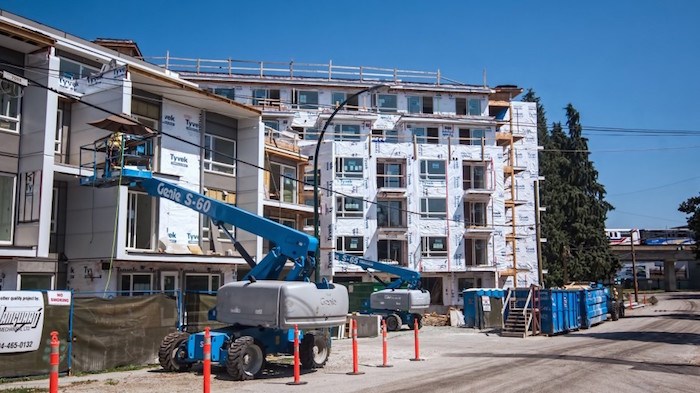 Cressey has shifted its business plan to build rental buildings, such as the Conrad, which is now under construction at 3365 Commercial Drive. Photo by Chung Chow/Business In Vancouver

Specifically, the GVBOT wants the federal government to:

In its report, More Homes, More Choices, the GVBOT praised the federal government for using its National Housing Strategy, and other measures, for making “meaningful strides” to help create affordable housing. Nonetheless, the GVBOT followed up those kudos by saying that the “the federal government could unlock more housing – especially rental housing – by using a broader set of tools within their toolkit.”

Yesterday, August 7, the federal government announced a significant investment in affordable housing in Vancouver, in partnership with the City of Vancouver. It is pumping in $184 million through its Canada Mortgage and Housing Corp. (CMHC), while the city is providing $97 million through leases on city land, grants and waived development cost levies.

Up to 1,100 homes in nine projects could be built on city-owned lots. The units are expected to include temporary modular housing, mixed-market rental homes and housing co-operatives.

“It affects the quality of life of residents and impacts many local businesses, who are finding it increasingly difficult to attract and retain skilled workers due to the high costs of housing.”

She added that in recent years, much of the public debate on housing affordability in the Lower Mainland has focused on the actions of local and provincial governments, but that the federal government could also play a role.

Many Vancouver developers have shifted their business models to focus on rental housing.

Coromandel Properties, for example, previously primarily built condominiums and it plans to build rental buildings on 41st Avenue near Oakridge.

Cressey is another developer is focused on rental housing, and its executive vice-president Hani Lammam told Business in Vancouver that municipal and federal incentives have made it viable to shift to building rental buildings from building condominiums.

“In 2016, we became uncomfortable with the home values that were being achieved for condominium product,” Lammam said last week.

“We felt it was unsustainable so we shifted our business model at that time to do more rental and more office product, and to step away from condominiums.”

He listed city incentives as including lower development-cost charges, higher maximum heights and densities, and fewer required parking spaces. Federal perks have come from the CMHC, and can include financing at attractive interest rates and for longer amortizations than would be normal, he added.