Army & Navy will celebrate its 100th anniversary this spring with a weekend of birthday celebrations across its five stores.
Mar 25, 2019 10:42 AM By: Elana Shepert 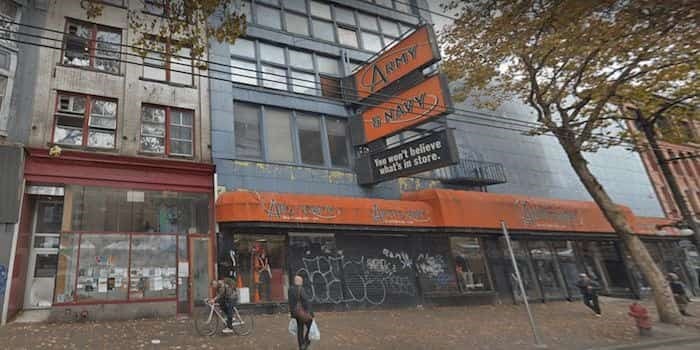 Army & Navy will celebrate its 100th anniversary this spring with a weekend of birthday celebrations across its five stores.

The events will take place in its Vancouver, New Westminster, Langley, Calgary, and Edmonton locations. However, the retailer states that it will focus, "particular emphasis on the newly renovated Cordova Street flagship store."

On Friday, May 3 the birthday celebrations will commence across the country and include Deals of the Century, spin-to-win and birthday cake befitting a grande dame.

“My Grandpa Sam started Canada’s original discount department store chain in 1919 and I am so proud to be honouring his vision and to celebrate this iconic company,” said Jacqui Cohen, President & CEO, Army & Navy.

“My father once said it’s a family business with a history, a soul and a smile. Everyone in Western Canada has an Army & Navy story to tell.”

The Hastings Street location first opened doors in Vancouver in 1919; it was the first Army & Navy store to open in the country.

Samuel 'Sam' Cohen opened the Hastings store with a truckload of bargain merchandise and a bank loan, and grew the business across the country. It became the first discount department store chain in Canada with nine stores and a mail order business in Western Canada.

The business has remained in the Cohen family for three generations, and has survived a number of challenging times in the Canadian economy.

Sam’s granddaughter, Jacqui Cohen, took hold of the company in 1998 as a hands-on business owner.

Alongside Army & Navy’s success, Jacqui, a Queen’s Golden Jubilee winning philanthropist, founded Face the World in 1991, to-date raising more than $18 million for 400 charities in the Lower Mainland that benefit children, women, the hungry and the homeless.