Ashwin Sood, shown here in his West Vancouver studio, will impart his 30-plus years of knowledge in the music biz as part of the Reboot Lab forum on Thursday, March 22.
0
Mar 20, 2018 3:33 PM By: John Kurucz 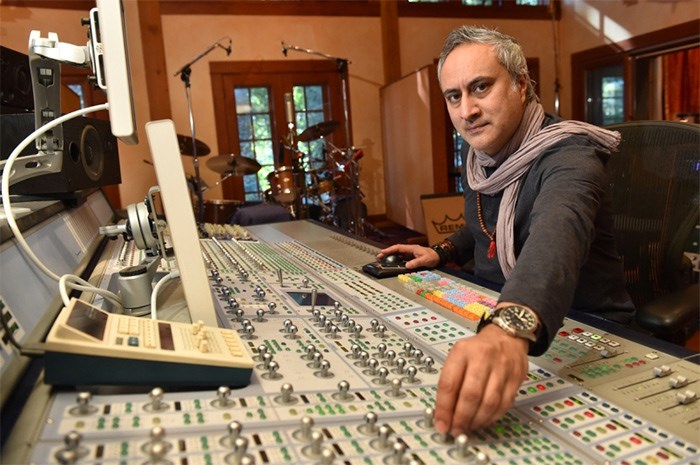 Ashwin Sood, shown here in his West Vancouver studio, will impart his 30-plus years of knowledge in the music biz as part of the Reboot Lab forum on Thursday, March 22. Photograph By DAN TOULGOET

While they’re all necessary evils for any musician in the 21st century, they’ll always play second fiddle to whole point of the exercise: playing.

That’s one of the fundamental points that’ll be stressed Thursday, March 22 as part of day-long music business forum called Reboot Lab. Running from 10 a.m. to 4:30 p.m. at the Sarah McLachlan School of Music, the forum will touch on songwriting, performance, recording, studio process, practicing, marketing and more.

Sood was the drummer in McLachlan’s band for 25 years — the two were married for close to two decades — and has played or worked alongside Stevie Nicks, Rufus Wainwright, Sheryl Crow and Jason Mraz, among others. Outside of his work behind the kit, he’s branched out into all facets of the music racket: production, songwriting, session work, music publishing and A/R. He’ll be joined Thursday by vocal coach and music mentor Brian Farrell, whose music career is 30 years deep.

The Courier caught up with Sood by phone to talk about the workshop, the headspace of today’s musicians and how to adapt in an industry that never stops changing.

What’s the most common mistake you see younger musicians make?

Young, up-and-coming singer/songwriters are obsessed with social media and they’re obsessed with the marketing of themselves, which is fine, and in some ways, very, very necessary. But the focus these days, for me, needs to be on your craft, the way you play your instrument and the way you make your art. People get so worried about having so many likes and so many friends on Facebook, yet when they get up on stage there’s nothing interesting, organic, different, new or special about the performances or the songs.

With social media and a decent laptop, anyone can call themselves a musician. What does today’s musician or band need to do to stick out in such a crowded playing field?

There’s this idea that the cream will rise to the top. Nope. A lot of the times the cream doesn’t get to the top because there’s so much f***ing cream out there. It’s hard to cut through, it’s hard to be noticed, it’s hard to get recognized. Everybody now has a laptop and is making records in their basement and they’re uploading them the next day onto iTunes. With any art form, it comes down to that fire and that passion for art.

Over the course of your career you’ve seen massive shifts in the music business. It’s difficult to make a living as a musician now more than ever. How do you assess the current mainstream music climate?

What I notice in terms of the world of reality stars is that the number of people who have actually gone on to do something is less than what you can count on one hand. Yes, everybody can do this in their basement. But the reality is it’s a very small group that makes it, becomes successful or is actually creating interesting, beautiful new music. There’s no short cut to hard work. You’ve got to put in your 10,000 hours. OK, so you’ve made a great record in your basement or apartment, but you get up on stage and you can’t even sing a note? People will recognize that immediately. I see it so much.

There was a time when A/R (artists and repertoire) agents used to do all the promotional leg work for a band. That’s not happening anymore. To what extent do bands need to focus on that aspect of their career?

Labels, agents and publishers won’t touch you until they see you have made a business for yourself out of this. The idea of artist development and putting money into artist development is dead. It died a long time ago. That’s the reality of the business now. No management company will even look at you unless you’ve got an Instagram following, some Spotify streams. It’s fascinating. No one wants to take a risk on artist development anymore because it costs money and that money isn’t there anymore, or so they say.

Your resume is extremely varied and you’ve worked in a business notorious for egomaniacs for 30-plus years. How are you able to transition from project to project while navigating all these different personality types and egos?

In my younger years, there were times were I should have kept my f***ing mouth shut, I didn’t and learned my lesson really quickly. I’ve been fired a few times and I should have been fired. It’s about being very intuitive and knowing what you’re there for and what your role is. Knowing when you can speak, when you can’t speak. You literally have to feel out the room and the people in the room. When you make yourself comfortable, it makes everybody comfortable. It’s really unspoken and it just happens.

Tickets for Reboot Lab cost $250 and are available at BrianFarrell.ca.