With the fireworks finale Saturday night and a hot, dry forecast for the coming long weekend, Vancouver Park Board is asking residents and visitors to respect restrictions on BBQs and smoking.
Aug 3, 2019 7:36 AM By: Jessica Kerr

With the Celebration of Light finale set for Saturday night and a hot, dry forecast for the coming long weekend, Vancouver Park Board is asking residents and visitors to respect restrictions on barbecues and smoking. 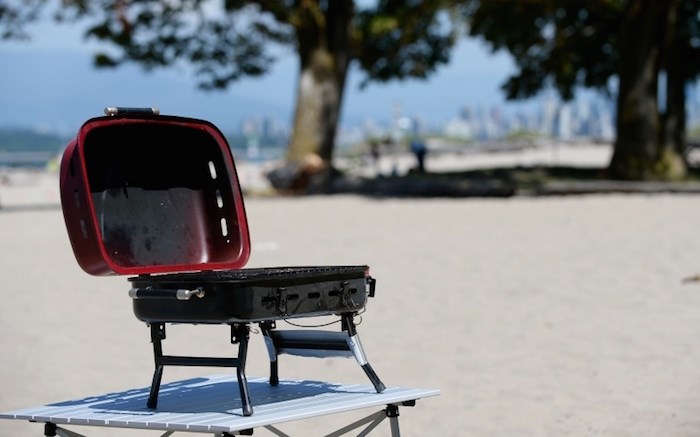 Vancouver Park Board is banning barbecues between Stanley Park and the Inukshuk at English Bay Beach during Celebration of Light Aug. 3. File photo Jennifer Gauthier/Vancouver Courier

“Vancouver parks and beaches are busier than ever at this time of year so the Vancouver Park Board is reminding visitors to respect barbecue restrictions and park smoking ban,” states an information bulletin.

During Celebration of Light, which wraps up Saturday with Croatia, no barbecues are allowed between the entrance to Stanley Park and the Inukshuk at English Bay Beach, whether it is on grass or the beach.

Extra park rangers will be deployed during the fireworks, along with firefighters and police officers, to keep an eye on things.

The park board does allow barbecues elsewhere in Stanley Park and English Bay, and other parks throughout the city, as long as they are 75 centimetres (29.5 inches) off the ground.

And smoking is prohibited in all parks and beaches year round. The park board says its primary goal is compliance through education, but fines are issues when necessary. Smoking in a park or beach in Vancouver is subject to a $250 fine.

Since early May, there have been 28 fires in Stanley Park alone. The largest, which covered an area of about 50 square meters, was started by a discarded cigarette.

To date, 15 tickets and 250 warnings have been issued to people smoking in parks or on beaches. Additionally, Vancouver police has issued tickets with a $575 fine to people “dropping or releasing a burning substance” under the province’s new Wildfire Act.

The recent damper, cooler weather has meant the fire risk has remained low-moderate, but with a sunny weather and high temperatures forecast for the coming week that risk is expected to go up.