B.C. government rolls out massive effort to move homeless from camps in Vancouver and Victoria

Professional movers will work with government, municipalities, health officials and several non-profits beginning this weekend in what will be a massive effort to house people.
Apr 25, 2020 10:03 AM By: Mike Howell 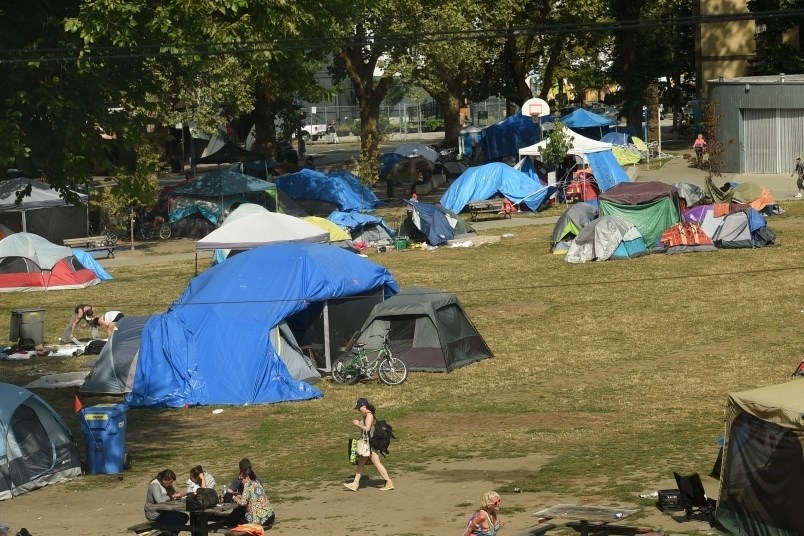 The B.C. government announced Saturday a massive effort to house homeless living in Oppenheimer Park. File photo Dan Toulgoet
The B.C. government rolled out an ambitious and unprecedented plan Saturday to move close to 700 homeless people from camps in Vancouver and Victoria into hotels, motels and community centres.

Professional movers will work with government, municipalities, health officials, hotel owners and several non-profits beginning this week in what will be a massive effort to house people.

In Vancouver, one hotel has been identified for people who test positive for COVID-19, although public health officials and politicians continue to say there have been no outbreaks in the camps.

Officials aim to move at least 300 people from Oppenheimer Park in the Downtown Eastside and another 360 living on Pandora Avenue and at Topaz Park in Victoria. Though the pandemic is driving the move, B.C. continues to lose hundreds of people each year to drug overdoses. Homelessness is also on the rise, as City of Vancouver homeless counts have shown.

“We are at the confluence of two of the most challenging health emergencies our province has ever faced, and we cannot leave our most vulnerable behind,” said Mike Farnworth, Minister of Public Safety and Solicitor General, at a news conference. “The time to act is now.”

Government expects the majority of campers to agree to move inside, although a ministerial order under the Emergency Program Act set May 9 as the deadline to transition people into housing.

Farnworth emphasized the order “is a public safety order, not a health order,” adding that police “and other compliance officials are able to enforce any violations of this Act.”

A total of 686 hotel and community centre spaces have been secured in Vancouver and 324 hotel spaces in Victoria. That includes a floor of a hotel in Vancouver strictly for women. A facility in Victoria is also designated for women.

All accommodations will be monitored by non-profits, which will provide 24-7 support for residents, including access to health care and medication-assisted drug treatment, if needed.

Daily meals and cleaning services will be included.

Shane Simpson, Minister of Social Development and Poverty reduction, said he was aware of problems at the camps related to assaults, weapons, overdoses and a homicide in January at Oppenheimer Park.

Simpson said the goal is not to transfer those problems to the hotels.

“The service providers, the community providers understand that,” Simpson told reporters. “They’re very skilled organizations, they have lots of experience operating other similar facilities successfully. So we’re hopeful that with structure, with resources, with supports, that we can turn the dial on some of that activity.”

Staff at each location is expected to monitor people going in and out of buildings to prevent guests from entering. Every person housed must follow isolation protocols and staff has to ensure all individuals who require self-isolation are doing so.

Government didn’t identify the hotels, many of which remain vacant in most cities in B.C. because of travel restrictions. Glacier Media has earlier reported that Roundhouse and Coal Harbour community centres have opened to homeless people.

Separate accommodation for youth living in encampments is also being arranged through the Ministry of Children and Family Development.

Personal belongings of people in the camps will be put in bins and moved by professional movers dressed in personal protective gear. Storage for additional belongings will be available.

Fiona York of the Carnegie Action Project told Glacier Media in an email that “making use of vacant hotel rooms is welcome — but needs to be offered to those most in need rather than simply those most visible."

Added York: “A much greater number of rooms should be made available to all those who need to safely self-isolate, including those who are homeless, in shelters and in SROs with shared washrooms and poor maintenance — almost 9,000 people are living in inadequate housing in Vancouver alone.”

Simpson said the goal is to move 15 to 20 people per week into housing, with the ministry’s goal to find permanent housing for all who leave the camps.

“We have no intention of these people being put back on the street at the end of this process,” Simpson said.