BC wildfires. Are they actually kinda great?

Make no mistake: wildfires suck. They destroy wildlife habitat, homes, they mess with our economy, and when they're crazy like they are right now even the air quality in the city gets messed up and AIR QUALITY ADVISORIES are issued, encouraging us to stay indoors. We're currently hovering between an 8 and a 9 on a scale of 1-10+ right now.

My father fought wildfires in the 1970s before I was born, and on one of his last trips out a guy on his crew was killed by a falling tree. Each year we lose a few people fighting these fires and that's the worst impact that they have. Beyond the hundreds of millions we have to spend to keep them under control, beyond any damage to wildlife and the environment, if you ask me it's loss of human life that's the worst when it comes to wildfires. 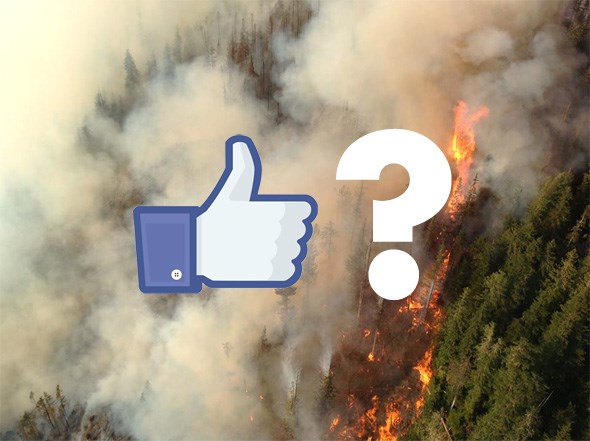 As you've likely already read in the news, we're having one of our driest years on record. Over this past weekend a staggering 50 new wildfires started in BC. To put this into perspective there are a total of 68 burning in the province right now; almost 75% started in the past 3 days.

The government has got a pretty decent effort going on their BC Forest Fire Info Facebook page (HERE), offering updates and insight onto what's happening all the time. You might want to plan your travel around it.

Also, HERE are the fire restrictions in effect in BC right now. Basically, don't burn anything anywhere at any time. If you smoke cigarettes and are heading to the outdoors consider switching to chewing tobacco or e-cigs. Anything that's not combustible. And bookmark that page for the next couple months as it'll come in handy in the fall when you're going camping and are wondering if the ban has been lifted yet. Last year it was lifted early September, but it will likely go later this year.

Now, it's hard to see the fire for the haze as it literally gives us headaches in the city, but the fact is that wildfires are a crucial part of keeping our forests alive. Your lungs may not be telling you that this week as you struggle with this awful yellow that's drifted into your homes and your workplaces, but it's the truth.

The website of the Natural Resources of the Government of Canada shares that "Climate change during the 21st century is expected to result in more frequent fires in many boreal forests" and that "Fire-prone conditions are predicted to increase across Canada. This could potentially result in a doubling of the amount of area burned by the end of this century, compared with amounts burned in recent decades."

Dr Timothy B Mihuc notes that "Wildfires, when allowed to burn in areas where they do not impact human development, are regenerative for the forest, revitalizing for the watershed, renew the soil, and reset the clock for the ecosystem.". These resets are exactly what we need to prevent a catastrophic mega fire in the future, as they "result(s) in a patchwork mosaic on the landscape of younger forest patches which act to reduce the spread of future wildfires. Without this mosaic of younger forest, which can stop a major wildfire in its tracks, future wildfires are very likely to become bigger and bigger." HERE is the entire piece where he shares insight on "Why wildfires are good for the environment".

All of this is not to say that I think forest fires are awesome. They're awful. And while the forest needs them, it's also been argued that forest practices and attempts to prevent fires in the past are partially to blame for them getting worse (HERE is a piece by a UBC Forest Science professor on that). But if they're not going to be controlled many campsites and outdoor locations that we enjoy, not to mention the economy of our province, could be negatively affected in a major way. I hope that you do your best to prevent them this summer, and that you (and I) aren't much more affected by them than we are right now. By writing this I mean absolutely no disrespect to the crews fighting the fires, in fact my intention is the opposite; to celebrate these folks, and to hope their work is as safe it can be given the circumstances. Those are the heroes out there, and we should be thanking them.