A developer is frustrated by city policies surrounding the construction of bike lanes in Richmond.
Sep 21, 2019 5:16 PM By: Richmond News

One developer is frustrated by city policies surrounding the construction of bike lanes in Richmond.

According to Soheil Biniaz, founder of the BC Land Assembly and Richmond Home Builders Association, he was asked by the city to include a bike lane in his latest project — located on No. 4 Road between Williams Road and Steveston Highway. 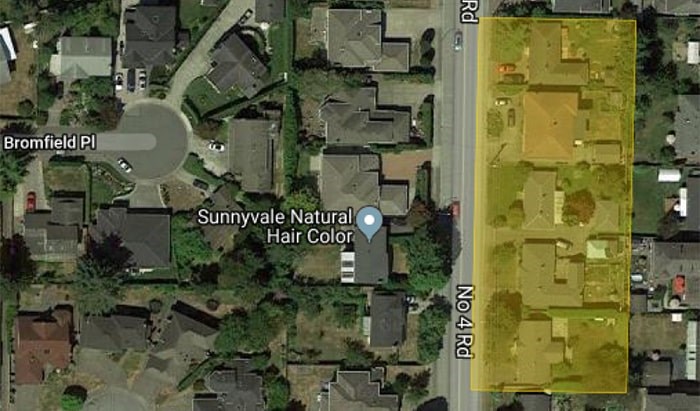 The location of Soheil Biniaz’s development at 10340 No. 4 Road is shown in yellow. The bike lane will run the length of the front of the property along No. 4 Road. Google My Maps

But that’s not the problem.

What irks the developer is that his bike lane may not be usable for years because the city hasn’t done its part.

Biniaz said that while city staff told him the bike lane would not be usable at this time, more bike lanes would eventually be built as more land assemblies were compiled and rezoned.

But, said Biniaz, no one knows when this will happen — it could take many years. And the city won’t ask a developer constructing a single-family home to install a bike lane.

“We’re dedicating this, we’re doing this big compromise on our project … putting (in) a bike lane that will never be used in the guise of the city creating bike lanes. That was the disappointing part of it,” said Biniaz.

Biniaz also wondered why a different form of bike lane couldn’t be built instead, such as one that is incorporated into the road as a separate lane, similar to many found around downtown Vancouver.

According to city spokesperson Clay Adams, the city is working to create a network of bike lanes as part of its official community plan, including a lane along No. 4 Road between Williams Road and Steveston Highway (which would incorporate Biniaz’s bike lane).

“While these (projects) may seem under-utilized to some in the short term, they are an important part of the city’s vision of a safe, active and sustainable community,” said Adams.

Adams explained that the city works with developers like Biniaz to build and support community infrastructure as part of the city’s long-term goals, and that it’s common for the city to make such requests.

“Without (this process), building the bike lane to the necessary standards in the long term would be more challenging and require additional work and inconvenience to the community,” said Adams, adding that the city encourages developers to bring forward any concerns they have so that the city can clear up any misunderstandings.

It’s a process that frustrates Biniaz.