A number of U.S.-bought billboards in Vancouver have not so sneakily urged residents to have just one
Sep 25, 2020 6:12 PM By: Sarah Grochowski 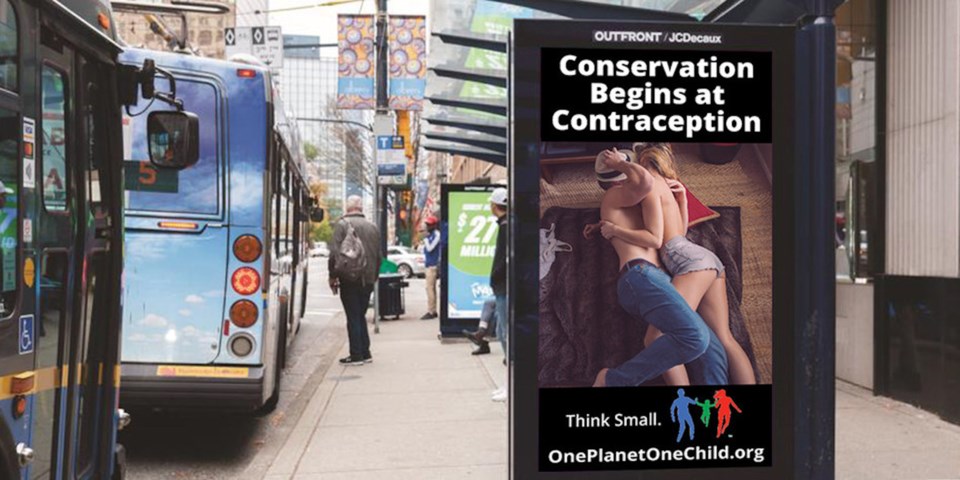 A U.S. group is trying to get the attention of Vancouver residents with ten bold ads. Photo: Instagram/Oneplanetonechild

A select number of billboards in Vancouver have not so sneakily urged residents to have fewer children.

Why? To curb the world’s overpopulation problem.

U.S. group World Population Balance orchestrated ads in ten high-traffic areas if the city as part of its “One Planet, One Child,” campaign to get people thinking about sustainability.

One of the ads, found at a South Granville transit stop reads like a movie poster.

“Overpopulation, now showing,” it says in bold letters, with results listed as “species extinction,” “deforestation,” “pollution,” and “the climate crisis.”

Another of its billboards, which pictures a half-naked man and woman lying down together, spells out to passersby: “conservation begins at contraception."

Now showing in Vancouver, Canada! For the next month, we've got the sustainable population message making a big impression with over 50 different designs showing on 7 giant digital billboards and 10 digital transit shelter displays in Vancouver, Canada. Learn more and help support the campaign at: https://oneplanetonechild.org - LINK IN BIO

World Population Growth first began the ad campaign in a few American cities. Since advertising in Vancouver this month, its campaigners are hoping to spread its message of single-child families to other Canadian cities.

Executive director Dave Gardner explained, “I want the children who are brought into this world to have a bright future, one with clean air and water, a livable climate and their needs met. For that to happen, smaller families are essential.”

“While Vancouver occupies an area of about 2,800 square kilometers, its footprint [the area of the planet required to provide food, water, and other resources, and to process the waste] is 36 times that,” according to the campaign’s website.

“Cities like Vancouver need to rethink their economic development strategies, ceasing to pursue population growth, and begin to celebrate the trend of more couples choosing smaller families," according to a WPB public statement.

The group says the earth's population – which the group estimates is approaching 8 billion – could be cut in half in the next century if everyone had just one child.

Cypress Mountain Resort is building a thrilling 'Mountain Coaster'
Sep 22, 2020 7:58 PM
Comments
We welcome your feedback and encourage you to share your thoughts. We ask that you be respectful of others and their points of view, refrain from personal attacks and stay on topic. To learn about our commenting policies and how we moderate, please read our Community Guidelines.