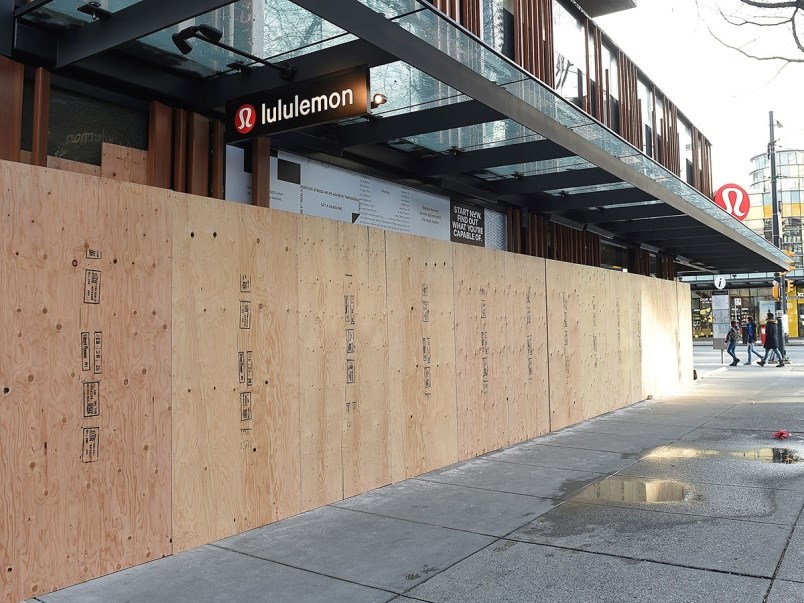 Break-ins to Vancouver businesses, which were rampant in the early days of the COVID-19 pandemic, are slowing down. Photo: Dan Toulgoet

Break-ins to Vancouver businesses, which were so rampant during the start of the COVID-19 pandemic, are now slowing down.

During the first half of 2020 break-ins nearly doubled, to 47.9 according to statistics shared Thursday by VPD Deputy Chief Howard Chow.

Chow said businesses most affected were those in Chinatown, the West End, Yaletown, and Strathcona.

The Vancouver Police Department (VPD) report examined crime statistics from Jan. 1 to June 30, comparing them to 2019.

In March, many of those businesses boarded up their windows as a guard against crime.

The VPD said it took significant measures to combat commercial crime during a time when provincial measures were in effect – including stores and restaurants limiting their capacity, and bars closing – to reduce the spread of COVID-19.

But since a majority of businesses are now operational, June break-ins lessened across the board compared to last year, according to newer VPD figures.

In the police district that encompasses the West End, Yaletown, Coal Harbour, and the Central Business District of Vancouver – which was initially hit hard by criminals – break-ins reduced by 10.5 per cent this August.

President of the Downtown Vancouver Business Improvement Association (DVBIA), Charles Gauthier, attributed the crime reduction to the return of business owners, staff, and customers to the area.

“We did see a spike in commercial break and enters in late March and early April, the crime was opportunistic. As an organization we added overnight security patrols,” elaborated Gauthier.

“Now we’re seeing a reversal of those [break-ins],” he said, noting that crime still occurs.

The president mentioned a few dozen stores and restaurants in the area that have gone out of business.

“The ones that could open did,” he told Vancouver Is Awesome.

Vancouver police correct number of charges laid against two men in break-ins
May 21, 2020 8:12 AM