New trail maps indicating an elimination of mountain biking trails on Burnaby Mountain were put up by mistake, the City of Burnaby says
Jul 24, 2020 2:40 PM By: Dustin Godfrey 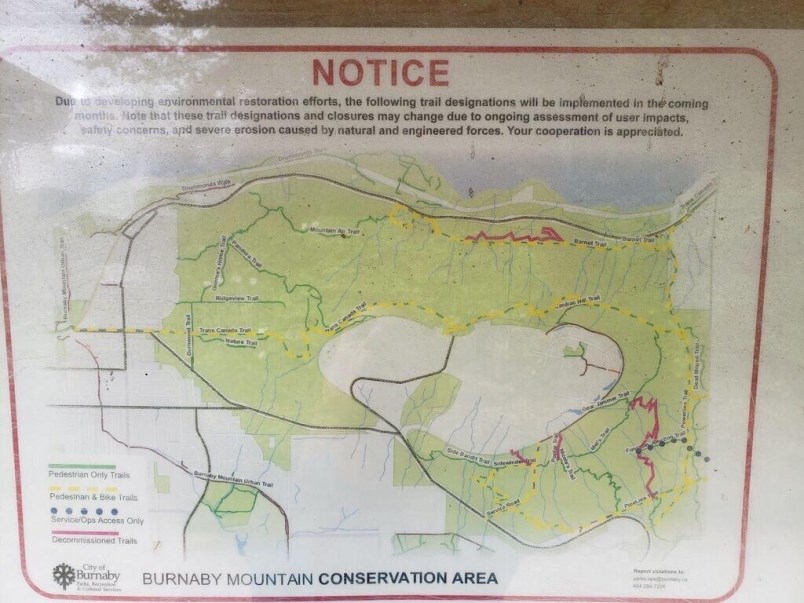 New trail maps indicating an elimination of mountain biking trails on Burnaby Mountain were put up by mistake, the City of Burnaby says.

The city is backtracking after the maps, which were first noticed by riders on Wednesday, incensed mountain biking groups. Those groups said the city was making the move unilaterally and without prior notice for riders.

“No warning whatsoever. No discussion, no input from user groups. We represent the largest user group on the mountain, and (the city) just had no courtesy to discuss it or anything. It was just sort of an announcement,” said Burnaby Mountain Biking Association president Judy Garren.

“The main issue is that the trails are multi-use, which we don’t agree with … and I guess there was an altercation between a cyclist and a hiker, and (the city’s) solution was to shut down the trails for bikes.”

But in an email statement on Friday, city spokesperson Chris Bryan said the signs showing trail maps were put up by mistake, and the city was replacing the signs.

“We apologize for any confusion or anxiety this may have created,” Bryan said.

The new trail maps left only two trails open for mountain bikers, which rider Byron Kirkham said were only considered climbing trails by bikers, as they were low-gradient gravel trails not made for downhill riding.

The trails were built decades ago by and for mountain bikers, and according to Garren, the city and cyclists began working together around 2005. But since the city got involved, riders have been limited in how much trail maintenance they can do – only four days per year, according to Garren, though riders have tried recently to get more trail days.

The city cited erosion around trails as the main reason for any potential changes, noting the mountain is a conservation area, which means the city must work to preserve the mountain’s ecology.

“As careful stewards, we are assessing the condition of some trails that have experienced significant erosion and tree root damage due to high use and natural factors,” Bryan said. “Any changes to trail designations would not happen without discussions with user groups, the parks commission and city council.”

But Kirkham and Garren both noted the greatest erosion of the trails came from an event a few years back. A nearby development had constructed a water retention pond, which overflowed during a storm and caused significant damage to several trails on the mountain.

“There’s been mountain biking on the mountain for decades with little to no impact,” Kirkham said.

What’s more, Kirkham noted the city has added trails to aid cyclists in the last decade or so, which he said sends mixed signals about the city’s position on mountain bikers.

Even with the city removing the original signs, Garren said she’s still concerned the city might remove mountain biking access in the trails, saying she still hasn’t been contacted by the city.

Prior to the city’s retraction, Garren said her association’s board was meeting to discuss next steps, adding she couldn’t recommend riders abide by the trail maps.