When Burnaby assistant fire chief Barry Mawhinney headed out to Burnaby Mountain on a 911 call Saturday night, he looked up and realized it was going to be a stubborn one. He could see flames shooting into the air.
0
Jan 21, 2019 6:49 AM By: Chris Campbell

When Burnaby assistant fire chief Barry Mawhinney headed out to Burnaby Mountain on a 911 call Saturday night, he looked up and realized it was going to be a stubborn one.

He could see flames shooting into the air. 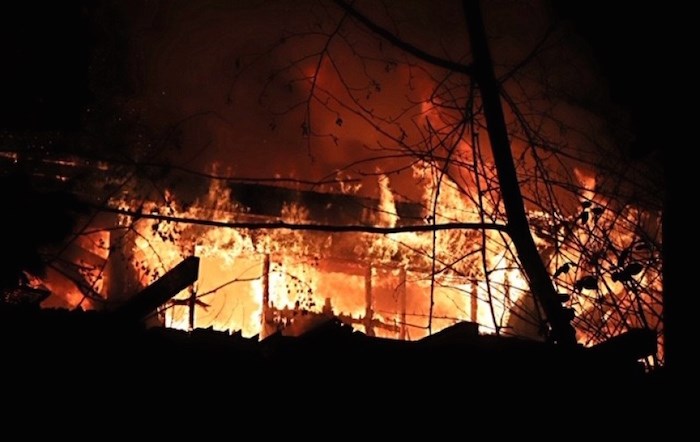 “You could see this when I left the station,” Mawhinney said around 10 p.m. Saturday night after a team of 34 firefighters had managed to finally put out the fire at an unoccupied workshop.

The fire was at the east end of Aubrey Road on land right next door to the Kinder Morgan tank farm. The fire did not spread to the tank farm, nor did it impact a house on the other side of the property. Nobody was injured.

The building was fully engulfed when firefighters arrived on scene.

“It was a substantial fire to begin with,” Mawhinney said.

It took about 45 minutes to finally put out the blaze, Mawhinney said.

Firefighting efforts were hampered because the property was at the top of an incline, which impacted water pressure. Fire crews had to connect together hundreds of feet of hose from the nearest hydrant.

Mawhinney said the initial concern was because the fire was so close to the tank farm, adding that the winds were favourable and the nearby trees benefited from the wet conditions.

Mawhinney said if this fire had happened during the hot summer months, it likely would have been a much different story.

The Burnaby Fire Department says it won't be conducting an investigation into the fire.

Assistant Fire Chief Stewart Colbourne says because the fire was in a garage or storage area and the building was fully consumed, so the department won't be able to figure out the cause.