The stabbing incident on a Richmond transit bus on Tuesday afternoon has now turned into a full-scale homicide investigation.
0
Jul 25, 2019 6:48 AM By: Alan Campbell

The stabbing incident on a Richmond transit bus on Tuesday afternoon has now turned into a full-scale homicide investigation.

The Integrated Homicide Investigation Team (IHIT) announced Wednesday afternoon that the 42-year-old male victim, from Richmond, has since died from his stabbing wounds. 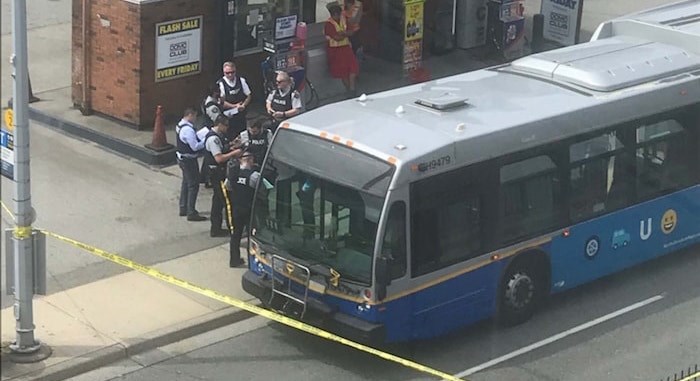 Police say the attack, which led to a 22-year-old Richmond man being arrested, appeared to take place after a "random argument" between the two passengers.

They are now appealing to the public for any information on what led to the attack, especially the passengers on the bus, who apparently left before the police arrived.

"Determining what initiated the dispute between the two men involved will be a key priority for our investigators," said Sgt. Frank Jang, of IHIT.

IHIT is not yet revealing the names of the victim or the man in custody.

The Richmond News reported yesterday how police responded to multiple 9-1-1 calls at around 2 p.m. to an incident on the bus, close to No. 3 and Cambie roads, which led to a 42-year-old male passenger being taken to hospital in critical condition.

BC Emergency Health Services (BCEHS) told the Richmond News earlier that an ambulance "transported the patient to hospital in critical condition."

Another witness, Peter Chen, watched the incident unfold from the platform of Aberdeen Canada Line station.

He told the Richmond News that he saw a man being arrested by police, after he stepped off a bus at the gas station.

“I heard the sirens before the bus even arrived, so I think the bus driver must have called ahead.”

Chen said the few passengers left on the bus were escorted off by police, along with driver.