Support is highest with people at the lowest levels of household income.

A new study from the Angus Reid Institute finds that the majority of Canadians approve of a shorter work week.

Due to the COVID-19 pandemic, many Canadians have drastically changed the way they work. Now, a study finds that 53 per cent of adults feel it is a good idea to make a new 30-hour work week standard in Canada. What's more, this is more than twice the number who say the opposite. Specifically, 22 per cent of respondents say it is a bad idea, while 25 per cent aren't sure how they feel about it.

Report authors say the COVID-19 pandemic and the difficulties it has presented may be responsible for the increase in support. In particular, 58 per cent of Canadians who applied for the Canada Emergency Response Benefit are in favour of the shorter week, which is eight-points higher than those who have not applied for the program.

With this in mind, Canadians of all income levels are more receptive of this idea. However, support is highest at the lowest levels of household income (64 per cent) and lowest among those with incomes over $150,000 per year (47 per cent).

Conservative voters were least likely to favour the shorter work week, and are most likely to say that shortening the work week is a bad idea. In fact, 40 per cent of conservatives feel this way, while, "past Liberal and NDP voters voice support at a proportion of two-thirds." 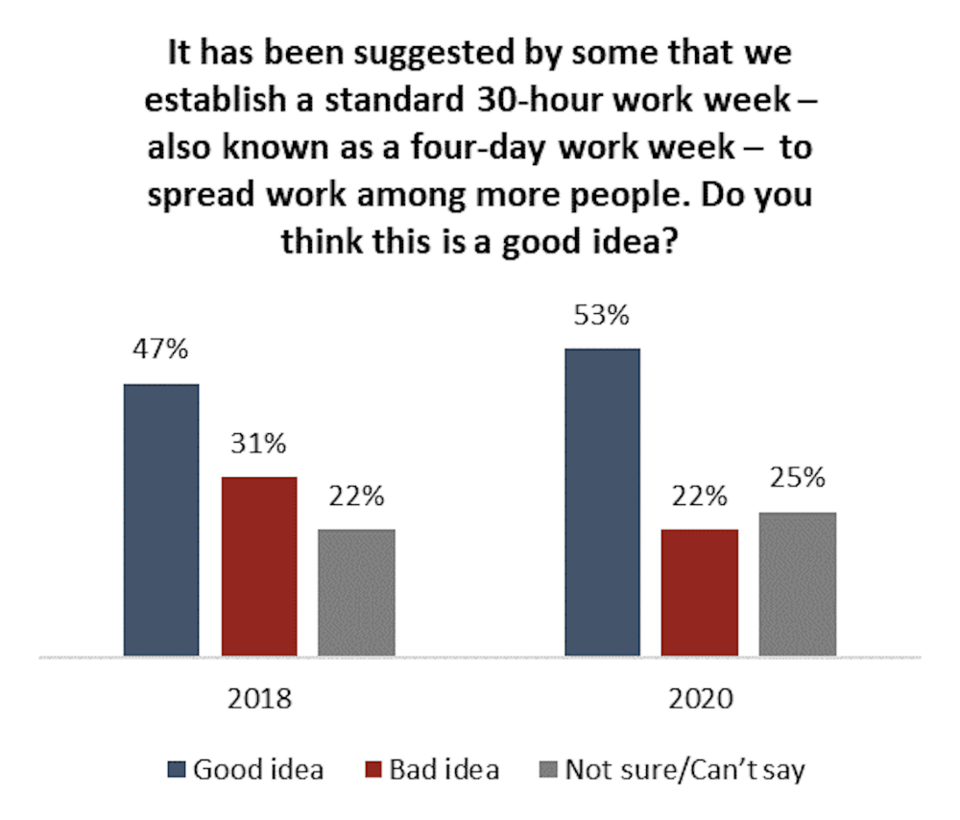 The study also found that, "The concept of a shorter work week, much like that of the universal basic income, finds its highest levels of support among younger Canadians, with six-in-ten of those ages 18-34 saying a four-day work week would be a good idea."

Across Canada, at least four-in-ten residents in each region support the idea, rising to three-in-five in Quebec (60 per cent). In B.C., 54 per cent of residents say it is a good idea, while 18 per cent say it is a bad idea; 28 per cent of British Columbians aren't sure how they feel.