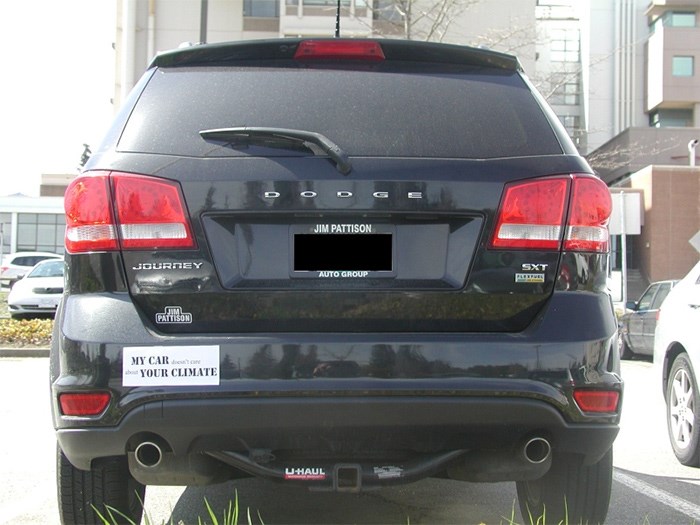 The online activities of a controversial air quality lobby group appear to have vanished into thin air.

Known as CO2alitionBC, the group’s short-lived online presence began in late November 2017 and appears to have ended in the last few weeks: Twitter, Facebook and Pinterest pages have been taken down along with the group’s website.

An Instagram profile with the same handle remains, though no photos or activity have been posted.

The group had spent the better part of four months posting stickers on trucks and SUVs that read “My car doesn’t care about your climate.” Photos of those vehicles, with the licence plates displayed, were then posted to social media channels with hashtags that read #climatechange #climateart #guerillaart #climatejustice #ClimateAction #mycaryourclimate.

While it was still online, the group’s website said, “SUVs and large trucks make good targets.”

The Courier reached out to the group asking for comment regarding its online disappearance, but received no response.

A similar tact was taken when the Courier asked for comment on a handful of occasions dating back to last year. A group member agreed to speak anonymously in late February via email, saying its actions were intended to be “provocative.”

“I think we underestimated how provocative it would be. One of our members had a pretty negative interaction with an angry SUV owner. Others are worried about implication to jobs and reputation,” the spokesperson added.

Subsequent questions about the group’s mandate and members were not returned at the time. Hashtags on their photos suggested the group was targeting vehicles across Vancouver and Metro Vancouver.