Mike Howell
Nov 2, 2020 1:48 PM
City council’s ongoing push to establish an independent auditor general’s office in Vancouver has rankled the city manager and sets up a showdown with politicians Wednesday as council looks to take next steps to set up the $2 million per year investigative unit.

The pushback by Sadhu Johnston and his staff is outlined in a report that includes concerns over the number of employees needed for the office and salary paid to an auditor general, which would likely be in the range of $200,000 per year.

“The city manager cannot endorse the report given that the city manager’s office has not been involved, nor consulted, in the development of this approach or these recommendations,” Johnston said in the section of the report reserved for his comments. “There are a number of considerations that have not been discussed with staff, but could be discussed as the initiative proceeds.”

The report, which goes before the 11-member council Wednesday, was authored by an informal working group of six councillors, including Colleen Hardwick, who has led council’s drive to create an independent auditor general’s office similar to those in other Canadian cities.

The report calls for approval of a series of recommendations to get an auditor general in place.

They include first enacting a bylaw to create the office, followed by establishing a recruitment committee to hire an auditor general and run an office on an annual operating budget anticipated at $2 million.

The goal is to have the office fully operational by 2022.

Council does not need Johnston’s support to pass the report, but it is unclear how the city manager’s concerns could affect the implementation of the office, particularly as the city attempts to recover from the pandemic’s hit on its finances.

Johnston and his staff reviewed the report prior to it being posted last week on the city’s website. Among his other concerns are the amount of city staff time required to assist the auditor general’s office with requested information and duplication of services with the city’s existing internal audit function.

On size of staff: “The size of the proposed staff appears to be equivalent to cities such as Ottawa or Edmonton, while our budget is considerably smaller, it may be that the office could be less than the proposed 7-10 staff.”

On the office’s dependence on current city staff: “If there are between 7-10 staff in the auditor general’s office, they will likely be dependent on city staff for information in the formulation of their audits and council will likely expect responses and follow-up on the reports. These requirements on staff time have not been taken into account and could amount to a considerable level of effort from senior staff, who are already stretched very thin.”

The report comes more than a year after council unanimously supported Hardwick’s motion to create an independent auditor general’s office.

Council has since unlocked $500,000 from this year’s city budget to help set it up, with additional funding for its permanence required from the 2021 budget, which council is expected to finalize in December.

On Monday, Hardwick and the five other councillors from the working group issued a joint statement explaining the rationale for not consulting Johnston and his staff in the development of the report.

“By necessity, the work was performed independently of staff, so it is entirely appropriate and expected that the city manager’s office would not be in a position to endorse,” the statement said. “Accordingly, Vancouver city staff have no oversight of the function which is why concurrence of the city manager was not sought or required for this report.”

The statement continued: “The proposal to establish an auditor general office for the City of Vancouver is intended to work alongside, but independent of staff. At a fundamental level, this arm’s-length relationship is a function of the office, and necessary to ensure fairness and accountability to both city staff and the public interest.”

This past summer, council received a 63-page research report authored by the Canadian Audit and Accountability Foundation that suggested Vancouver could create an independent auditor general’s office on models implemented in Halifax and Ottawa, with up to 10 staff and require an annual budget of $1.1 million to $2 million. 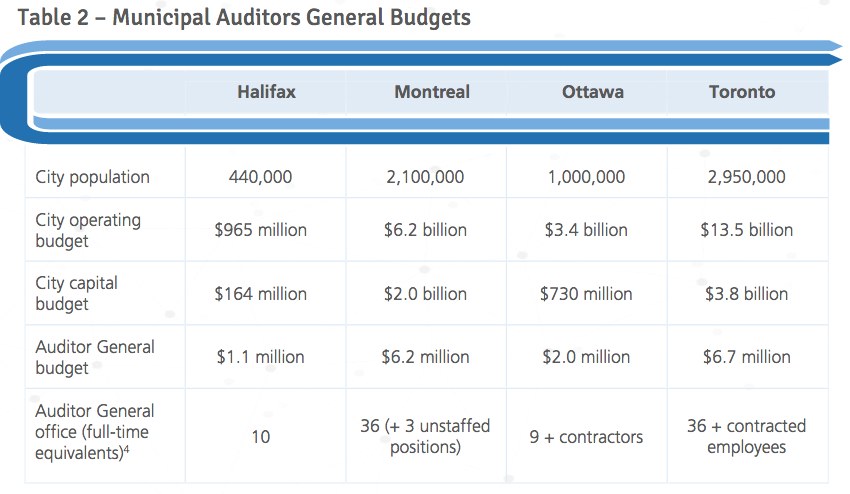 In Ottawa, which has a population of one million and a recent operating budget of $3.4 billion and capital budget of $730 million, auditor general Ken Hughes oversees an office of nine people plus “contractors.”

That office’s annual budget is $2 million, with Hughes’ salary in the $224,000 to $241,000 range, according to information supplied to Glacier Media in July from Hughes, who said at the time that spending money to set up an office in Vancouver — even during the pandemic — will achieve long-term savings.

He cited an example in Ottawa where his office conducted an audit on a city contract for green waste pick-up. The investigation discovered over-payments of $12 million and found issues with the wording of the contract and manner in which the request-for-proposal process was led.

Audits pay for themselves

“City staff renegotiated that contract and were able to reduce some of the loss going forward,” Hughes said. “Certainly for an audit that would have cost my office in manpower something in the order of $100,000 to $150,000 to conduct, we returned at the very least $12 million in actual savings.”

Hughes said audits are proven to pay for themselves and that taxpayers will benefit from an unbiased analysis of how the city conducts its business.

In their statement Monday, each of the six councillors from the working group outlined their support for the next steps outlined in the report, with Hardwick saying “the most fundamental characteristic and principle” of the auditor general model is independence, both from the city administration and council.

“This means that city administration should not control or influence the office’s budget, staffing, or mode of reporting, and city council should not direct the subjects to be audited or the content of audit reports,” she said.

Coun. Adriane Carr said the role of councillors is to put public interest first and that establishing an independent auditor general’s office supports that commitment “in a fair and unequivocal way.”

Coun. Lisa Dominato said the office will complement the city’s existing internal audit function and annual external audit, while Coun. Rebecca Bligh said it will fill a unique role “in fostering accountability around spending, efficiencies and general stewardship of public funding and programs.”

Coun. Pete Fry said the office will be a great tool and important layer of transparency and accountability for the public.

Wednesday’s council meeting is scheduled to begin at 9:30 a.m.