North Vancouver RCMP say one man is in hospital and another has been ticketed following a collision between a cyclist and a driver Wednesday morning.
0
Jul 31, 2019 1:15 PM By: Brent Richter

North Vancouver RCMP say one man is in hospital and another has been ticketed following a collision between a cyclist and a driver Wednesday morning. 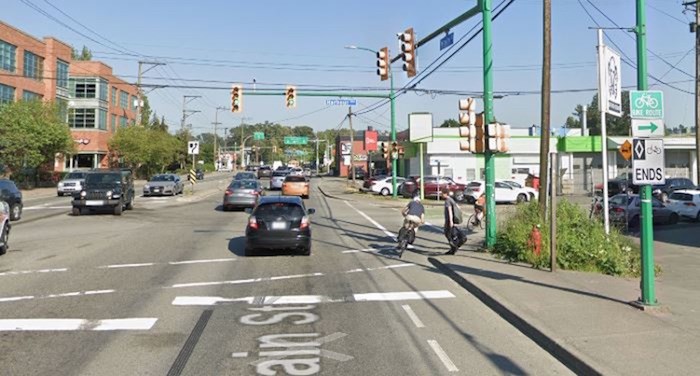 The site of a collision between a cyclist and driver Wednesday morning in North Vancouver. Photo via Google Earth

According to police, the 40-year-old North Vancouver man, was riding east on Main Street at Harbour Avenue when the eastbound driver of a pickup truck turned right onto Harbour in front of him, causing the cyclist to crash into the passenger side door.

The driver got out and called 911.

“When the police arrived, the cyclist was conscious and being treated by the paramedics,” said Cpl. Peri Mainwaring, North Vancouver RCMP spokeswoman.

“The driver turned right onto Harbour Avenue and the cyclist kept going right onto the passenger side front door of the driver’s vehicle.”

Mainwaring said the victim was taken to Lions Gate Hospital with injuries that were not life threatening.

Officers issued the driver, a 40-year-old North Vancouver man, a ticket for driving without due care, which carries a maximum fine of $368.

“When you’re driving, you’ve got to be aware when cyclists are coming along up beside you,” she said.

At that stretch of road, there is a painted bike lane that comes to an end at Harbour, and cyclists headed for the Ironworkers Memorial Second Narrows Crossing are encouraged to detour down to Barrow Street to reach the bridge.