One homeless advocate is calling for change after a woman died after getting caught in a clothing donation bin outside West Point Grey Community Centre.
0
Jul 24, 2018 4:20 PM By: Jessica Kerr

One homeless advocate is calling for change after a woman died after getting caught in a clothing donation bin outside West Point Grey Community Centre.

“I think one death in a clothing bin is too many. We have had three over the last four years in Metro Vancouver; a fourth death happened in Calgary last year. At that point we are not looking at unavoidable tragedies; we are looking at a cry for action,” said Nicole Mucci with Union Gospel Mission.

Police were called to the area of West Second Avenue and Trimble Street just after 4 a.m. Monday after residents reported someone yelling for help. 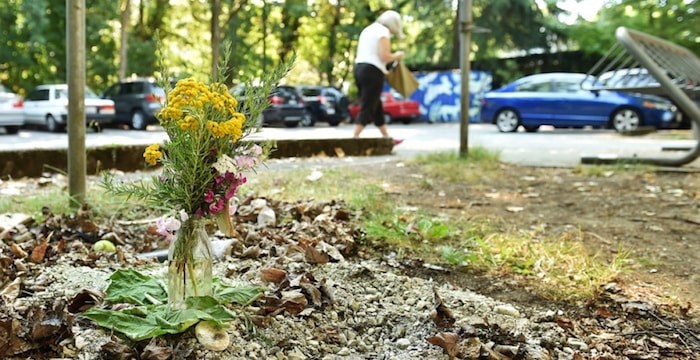 A small memorial for the 39-year-old woman who died Monday after crawling into a clothing donation bin outside West Point Grey Community Centre. Photo Dan Toulgoet

According to multiple media reports, the 39-year-old woman was the man’s girlfriend and the couple had recently become homeless.

Robillard said the woman’s death is not considered criminal in nature and the investigation has been turned over to the BC Coroners Service.

“Our initial reaction was heartbreak for the young woman and her partner who witnessed her death…," Mucci said. “We were devastated for him — that kind of grief is unimaginable — and for her family who will undoubtedly be heart broken in the days and weeks to come.”

Heartbreak quickly turned to a call for action.

“Change needs to happen,” she said. “I think the bins need to be redesigned.”

Mucci pointed to a recent project in the Okanagan where engineering students from UBC partnered with a local church in Kelowna to consider the needs of the homeless population there.

“They discussed the need for their shopping carts to be designed in a way that would help the homeless men and women protect their possessions and keep them safe and they actually came up with a really innovative approach to that,” she said. “I think if we were to look at this tragic death as a call to action for other engineers or architects or interior designers or people who might be outside of the typical outreach community to consider how their skillset may save lives would be a great start.”

Mucci said the issue is twofold — changing the design of the bins and looking at how community groups and organizations get the word out that there are alternatives.

“There are so many barriers and so how can our outreach team, how can different organizations come together and make sure that we are sharing where the resources are available?”

Union Gospel Mission has a clothing room available with clothes, jackets and shoes available for those in need. And the need is on the rise.

“With the affordability crisis continuing as well as low vacancy rates we are continuing to see increased homelessness in Metro Vancouver at a rate of about five people per week,” Mucci said.

“The need is increasing for services and for resources and for survival items. And that’s the key point — the folks that are crawling into these donation bins are in survival mode,” she said. “They are getting what they need in order to survive, so we need to look at how we can address this systemically as well as on the ground.”