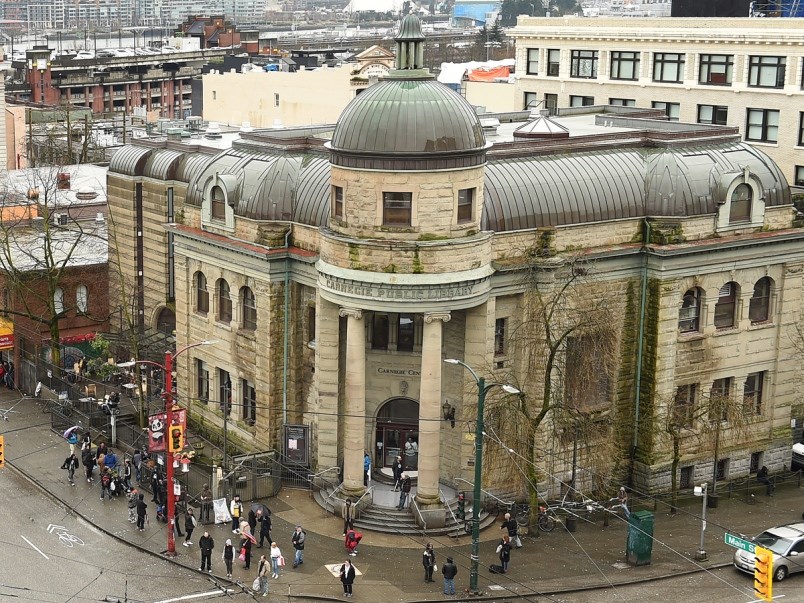 “This is, without a doubt, an extremely tragic incident,” said Const. Tania Visintin, a Vancouver police media relations officer, in a news release. “We need to speak with any witnesses and the mother of this baby as we are deeply concerned for her mental and physical well-being.”

Added Visintin: “It has been a tough evening for the community and the department.”

Police were called just before 6 p.m. to Main and East Hastings streets for a report of a newborn baby in a portable washroom. It was obvious to responding officers, Visintin said, that the baby was deceased.

Janice Abbott, the CEO of Atira Women’s Resource Society, tweeted Thursday that reporters should prepare a story that highlights the “multiple complex reasons this might happen, the pain of the mother and the loss of the infant.”

“This is not the story of a woman who failed, but about a woman who was failed,” said Abbott, who also wrote a recent thread about the deteriorating conditions in the nearby Oppenheimer Park homeless encampment.

Over the past year, she said, women shared stories about the violence they experience in the park.

“These include stories of rape, sexual assault, assault, being robbed, threatened and coerced into doing things they have no interest in doing.”

"I can't read any more emails today from people demanding we cut services and slash taxes," said Boyle, referring to council having to decide on cuts from the city's operating budget.

The city is losing up to $5 million per week in revenues associated to suspending parking enforcement in most of the city and closing of community centres and other facilities because of physical distancing orders.

"We are, collectively, failing those who need support the most," Boyle said.

"Don't tell me it's not our jurisdiction. We all need to do everything we can."

In recent weeks, portable washrooms and hand-washing stations have been placed in areas around the Downtown Eastside for people on the street to use during the pandemic.

Police reported an overdose death Saturday in one of the washrooms and say about a half dozen were set on fire.

A long stretch of sunny weather combined with many single-room-occupancy hotels not allowing guests and the closure or reduction in services has forced many people to fill up the sidewalks of East Hastings.

For many residents, the closest hospital is St. Paul's on Burrard Street.

Dr. Daniel Kalla, head of the emergency department at St. Paul's, told Glacier Media earlier this week that patient visits to the ER had decreased 40 per cent since early March.

Kalla said he was worried that people who needed medical attention for serious health issues were not attending for fear of contracting COVID-19, which he said is a misconception.

"We have no evidence that anybody has ever been infected in Vancouver by going to an emergency department for another issue," he said.

Kalla also noted there had been a worrisome drop in the number of people visiting the ER with mental health issues.

"With the stress and fear and anxiety out there, it doesn't make sense for mental health visits to be down," he said.

Wednesday was “cheque day” for many residents in the Downtown Eastside, with social assistance cheques distributed in the community. Typically, emergency calls for police, paramedics and firefighters increase during the week.

B.C. Coroners Service data covering 2010 to 2019 shows an uptick in overdose deaths in the days following cheque payments, with an average of 163 on Thursdays and Saturdays.

The lowest days are Mondays, with an average of 104.

Mayor Kennedy Stewart announced earlier this month that 16 people died of an overdose in Vancouver over a recent two-week period.