The cause of a deck collapse at a home in Langley, B.C., during a wedding celebration that sent more than 35 people to hospital remains under investigation, the RCMP said Saturday.
0
Apr 21, 2019 8:59 AM By: The Canadian Press

LANGLEY, B.C. — The cause of a deck collapse at a home in Langley, B.C., during a wedding celebration that sent more than 35 people to hospital remains under investigation, the RCMP said Saturday. 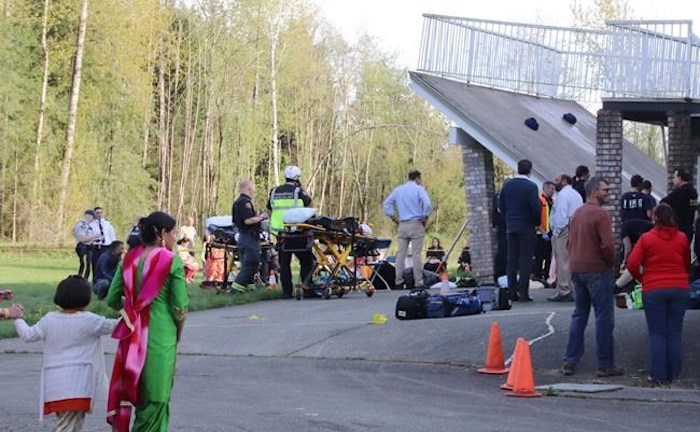 First responders attend the scene of a deck collapse in Langley, B.C. on Friday April 19, 2019. THE CANADIAN PRESS/Shane MacKichan

Langley RCMP Cpl. Craig van Herk said officers have been at the scene since Friday evening, but the cause of the collapse has not been determined.

He said the preliminary investigation suggests the collapse was not the result of a criminal act. But until investigations are complete, access to the property is restricted, said van Herk.

"Until they can secure everything and make sure everything is safe, we're going to hold the property," he said. "The investigators really don't see anything that is overtly criminal or an overt cause of it."

Van Herk said 911 calls started flooding the Langley RCMP on Friday evening, with reports of multiple injuries at a home on 268th Street.

He said police do not have detailed information on the status of those injured, who range in age from children to seniors.

"Were people above (the deck) or below it?" said van Herk. "All of those questions are still up in the air, mainly because the vast majority who were there are directly involved and are either at the hospital being treated or are at the hospital visiting and supporting their loved ones and friends."