A business owner claims he wasn’t told about impending plans to redevelop a property on No. 3 Road before buying and renovating the now-demolished Shanghai House Restaurant.
0
Aug 15, 2019 7:24 AM By: Maria Rantanen

A business owner claims he wasn’t told about impending plans to redevelop a property on No. 3 Road before buying and renovating the now-demolished Shanghai House Restaurant. 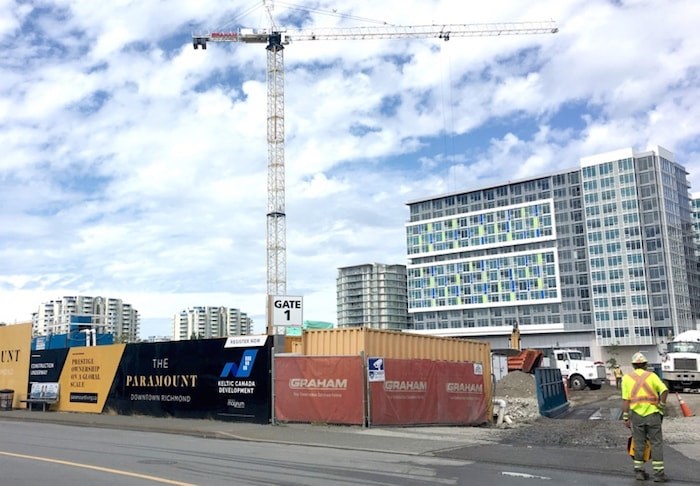 Keltic Development is building four towers of mixed residential, commercial and office on No. 3 Road and Cook. Photo by Maria Rantanen/Richmond News

Gu Holdings has filed a civil suit against Keltic Development and Sutton Realty after buying and renovating the restaurant on No. 3 Road only to receive an eviction notice to vacate the premises within a year of taking possession.

Keltic Development owns the property and Sutton Realty is the company through whom Gu negotiated the purchase of the lease.

The suit claims a redevelopment plan was already underway for 6340 No. 3 Rd., across from Richmond Centre, and that he wasn’t informed about the plans despite making inquiries.

Keltic Development and the realtor haven’t filed their statements of defence yet, but Keltic told the Richmond News that they conduct themselves “in accordance with applicable laws.”

According to the claim, in March 2017 Keltic’s agent told Gu’s realtor, Roger Chan with Sutton Realty, that the owner hadn’t applied for rezoning or demolition, but that it might redevelop later.

Gu Holdings signed a contract to buy the lease for Shanghai House Restaurant from Wang & Chao Enterprises for $325,000 on March 30, 2017 and proceeded with renovations between April and July.

However, the lease contained a clause which allowed Keltic to give six months termination notice in the event the property was to be redeveloped.

At the end of September, Gu Holdings received a notice from Keltic saying it planned to demolish the property and the lease would end March 31, 2018.

Gu Holdings is also suing Chan and Sutton Realty, claiming they didn’t do their due diligence with regards to Keltic’s intention with the property and should have advised his client of the risks involved in entering the contract.

Currently, a four-tower complex, called “Paramount,” with residential and commercial units, office space and a childcare centre is planned for the property.

Anthony Lo with Keltic told the Richmond News they are reviewing the statement of claim and will file a response within the time period given, which is in early September.

“As the matter is currently the subject of legal proceedings, Keltic will not comment other than to say that it conducts itself in accordance with applicable laws and its response to the claim will be based on the facts of the matter,” Lo said in an email.

The corporate summary of Gu Holdings lists Xin Lin Gu as its director and its mailing address on Thirlmere Drive in Richmond.

According to BC Online information, Gu Holdings is in the process of being dissolved.