Douglas Coupland's portrait of Canada is bright, optimistic and in 3D

Artist Douglas Coupland smiles while organizing his latest work “The National Portrait,” a series of 3D portraits printed from hundreds of scans of Canadians’ heads, at a studio in Vancouver on Thursday November 9, 2017.
0
Jun 27, 2018 10:09 AM By: The Canadian Press 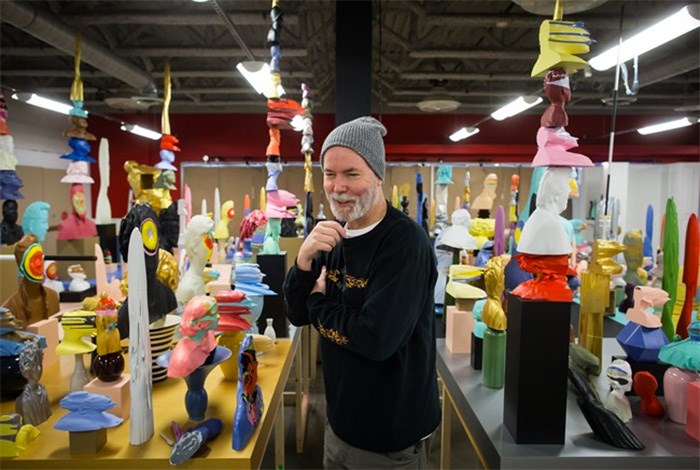 Artist Douglas Coupland smiles while organizing his latest work “The National Portrait,” a series of 3D portraits printed from hundreds of scans of Canadians’ heads, at a studio in Vancouver on Thursday November 9, 2017. The project will be on exhibition at the Ottawa Art Gallery from June 29 to August 19, 2018. THE CANADIAN PRESS/Darryl Dyck

This is Douglas Coupland's vision of Canada: bright, optimistic, three-dimensional, and with nary a red-and-white maple leaf or Mountie in sight.

"The National Portrait," a collection of 1,000 3D-printed busts of Canadians, all brightly painted, distorted and arranged like a garden, opens at the Ottawa Art Gallery on Friday.

"It's an incredibly optimistic piece," said Coupland in an interview inside his Vancouver studio, surrounded by the assortment of multicoloured heads.

"It's a sense of unity. Not many countries right now have unity. It's nice to express that."

Coupland dreamed up the project more than three years ago with help from Peter Simons, co-owner and president of Simons. The "Generation X" author and visual artist was working on a different piece for the department store at the time.

During a visit to Coupland's studio, Simons saw 3D printers at work creating miniature busts, and the two started talking about using the technology to create a national portrait.

"As technology it's radically democratizing," Coupland said. "You can be very casual and quite cavalier with the human bust, which even three years ago you couldn't have done.

"In 20 years, they'll look back and go, 'Oh, isn't that quaint?' How little they knew back then. If only they knew some big technological innovation was coming."

Coupland began travelling to Simons stores in nine cities across Canada to scan ordinary people who lined up to participate. His team ultimately scanned some 1,700 people over two years, although only 1,000 heads made it into the finished piece.

After the first stop in Quebec City, Coupland learned what made for a good scan. A scarf, a cowl-neck sweater or a hoodie all helped, but interesting hair was the most important feature of all. He and his team began approaching people with dreadlocks and pompadours.

"I think the thing about having cool hair is that you probably know you have cool hair. So when someone wants to scan your hair, it's like, 'Oh yeah, sure, happens all the time,' " he laughed.

Finding a person with a mohawk became their "unicorn," Coupland recalled, and the team was on "full mohawk alert" at all times.

On the last day of scanning in Halifax, they finally got their chance. A woman mentioned that her boyfriend had a mohawk, but he was at home playing video games. Coupland's team coaxed the man into pressing the pause button.

"He showed up and you could see he's really pissed off, because he's in the middle of Grand Theft Auto or something," Coupland chuckled. "He was the last person we scanned."

Coupland said he remembers most of the people who participated in the project. The piece captures a diverse mix of Canadians: kids, tweens, young people, seniors, moms and dads.

"It's a very heightened moment because you wait in line and you're watching other people getting scanned. Suddenly it's like, gasp, it's your turn," he said.

"We couldn't help but pick up on that excitement."

The heads have been stretched, squished, blown up, shrunk or otherwise reshaped, and splashed with bright colour, in an effort to capture and intensify those emotions, he said.

But as much as he enjoyed meeting and scanning people across the country, he admitted to being a little bit tired after repeating the process 1,700 times.

"I have great respect and admiration for those guys who go from school to school taking school portraits. You're kind of trapped on a rung of hell I can't even begin to imagine."

The Ottawa Art Gallery will feature "The National Portrait" until Aug. 19.