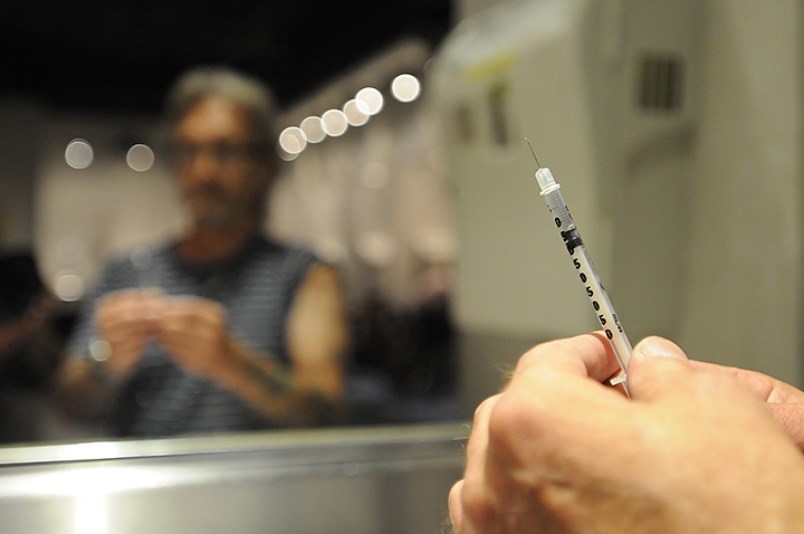 Vancouver city council met Tuesday to hear from more than 100 residents about a proposal for a drug injection site at 1101 Seymour St. File photo Dan Toulgoet
A proposal before Vancouver city council to allow a drug injection site to operate in a city-owned highrise on the edge of Yaletown has pitted supporters and detractors against each other in a test of council’s approach to drug use and its response to community unrest over an increase in street disorder.

More than 100 people registered to speak Tuesday to council about a Vancouver Coastal Health-supported proposal to open an injection site in a 580 sq. foot space on the first floor of a mixed-use building at 1101 Seymour St.

Council was still hearing from speakers late Tuesday night and had not made a decision before Glacier Media’s deadline on whether it would approve the facility, which would be operated by non-profit agency RainCity Housing.

But those who spoke during the day and early evening were clear in their positions, with council hearing passionate — and sometimes angry — pleas from people to reject the site and others who want the facility opened to help save lives.

Some wondered why such a site would be considered near Emery Barnes Park, which is used by children. At the same time, supporters believed it wasn’t necessary for council to consider a proposal for a service that is already entrenched in the city’s drug policy.

The pushback from residents was largely based on what the neighbourhood has experienced since the B.C. government cleared the Oppenheimer Park tent city in April and moved homeless people into downtown hotels, including the Howard Johnson on the Granville strip.

An increase in drug use, crime and street disorder that includes people relieving themselves in public has instilled fear among seniors and families, with some threatening to leave the city, council heard.

“This neighbourhood has become a mecca for all sorts of increased drug activity and crime,” she said, describing Granville Street as a “war zone” and that people are afraid to travel through the area.

Hallanzy told council about her observations of people using drugs on the street and how a man threw a milkshake at her after telling him not to smoke crack cocaine in front of children.

“I am not stigmatizing, I am not marginalizing,” she said. “I am feeling a normal human response to such behaviour. That’s how the world works — we are people here, we are not saints, we are not stereotyping. We have experienced many things that nobody who wants to feel safe in the neighbourhood should experience.”

Resident James Faulkner, who has a young daughter, owns a business in Yaletown and described the opposition to the injection site by neighbours as the “awakening of the silent majority.”

“So if we keep pushing and pushing initiatives like this, it will bubble up and change things very quickly,” Faulkner warned council.

“I know this is kind of new to everyone on council here, but you must either choose to be in an alliance of strength and logic, or on the side of dysfunction and weakness. Logic will help all those in need, but weakness will only prolong their pain. We must stop enabling drug addicts.”

Brianna Price, a Vancouver resident, said she supported the proposal on Seymour Street because help should go to people who need it. Drug users, she added, are “not the monsters you believe they are.”

“We’ve seen the research that backs that up, and we know that overdose prevention sites work,” Price said. “We know they make communities safer than when there’s open air drug use which — as many speakers have indicated — there already is in the area.”

Added Price: “If you want to make Vancouver safer, then focus on helping those who are the most unsafe — the people who are going to benefit from this site.”

Garth Mullins, a member of the Vancouver Area Network of Drug Users and creator of the Crackdown Podcast, recalled that he bought and injected cocaine as a teenager about 100 feet from the proposed site.

That was several decades ago when the Capitol Six theatre still existed and the Granville Street area was home to pornography shops. Mullins gave that historical perspective to contrast what residents said about the neighbourhood being family friendly.

The proposal was before council because the building is owned by the city and a staff report requests a modification of an existing lease to one of its tenants, Supporting Women’s Alternatives Network, or SWAN.

SWAN wants to move from the first floor — the proposed location of the injection site — to another vacant and bigger space in the building. Such a move would open up the space for RainCity Housing to begin operating the injection site by Nov. 1.

The first four floors of the building are dedicated to social services, while 11 floors above are home to people living in 81 units of non-market housing, which was built in 2017.

If approved, the injection site would replace a mobile service the PHS Community Services Society has offered since May in a van outside the building in the 1100-block Seymour St.

The new facility would also trigger the closure of the outdoor injection site located several blocks away in a parking lot at St. Paul’s Hospital, which some residents argued should remain open or made permanent because of its proximity to medical staff and hospital beds.

“Having an indoor option in the neighbourhood is going to provide safety for people who use drugs — to come indoors and use highly toxic, dangerous substances under the supervision of staff and peers, who can provide them with support,” said Van Veen, noting a team will be in place to connect users to treatment.

“It’s also going to provide an opportunity for people to safely discard harm reduction equipment like syringes [instead of] in nearby parks, alleyways and business enclaves.”

Allowing injection sites in Vancouver is not a new approach to drug use, with the city becoming the first in North America to allow federal government-approved sites — the Dr. Peter Centre facility in 2002, and Insite in 2003.

Since then, more sites have opened across the city for a total of 11. Those include more federal government-approved sites and others known as overdose prevention sites, which the provincial government allowed after a public health emergency was declared in B.C. in 2016.

The total number of sites doesn’t include those set up in some of the single-room-occupancy hotels in the Downtown Eastside, or drug services and injection rooms available to tenants living in temporary modular housing buildings across the city.

Public health officials have attributed the deaths to an increased toxicity in the illegal drug supply and fewer drug users accessing services. Those factors are a result of tighter border controls related to the pandemic and physical distancing measures around no-guest policies at single-room-occupancy hotels.

A map of Vancouver used in a staff presentation Tuesday showed the Seymour Street corridor and neighbourhoods to the west generated 410 overdose calls for firefighters between January and Oct. 4 — second only to the Downtown Eastside, with 2,054.

Those calls, however, have not equalled the second most deaths in Vancouver, with the southeast quadrant earning that spot. The Downtown Eastside has seen the most overdose deaths since the pandemic was declared in mid-March, with 110.

“When it comes to services, we’d like to see these services where the deaths are occurring,” Spearn told council. “We can’t help people when they’re deceased, and there are still some spots in the city that have much greater deaths than the area being proposed right now [for an injection site].”

Spearn said that without safe supply, he predicts an increase in drug dealing in the area outside the proposed site on Seymour Street and that it will require more police response.

The proposed site would not include a spot where users can smoke drugs, which worried Coun. Pete Fry, noting BC Coroners Service data shows overdose deaths have spiked among people who smoke drugs such as fentanyl and crystal methamphetamine.

The proposed site is to be named after Thomus Donaghy, who was stabbed to death in July outside the St. Paul’s Hospital injection site. Donaghy, 41, was a volunteer at the facility.

Update: Council will reconvene Oct. 20 to make a decision on the proposal.

Hotel Vancouver's facade to light up with artwork and animation next month
Feb 24, 2021 2:44 PM