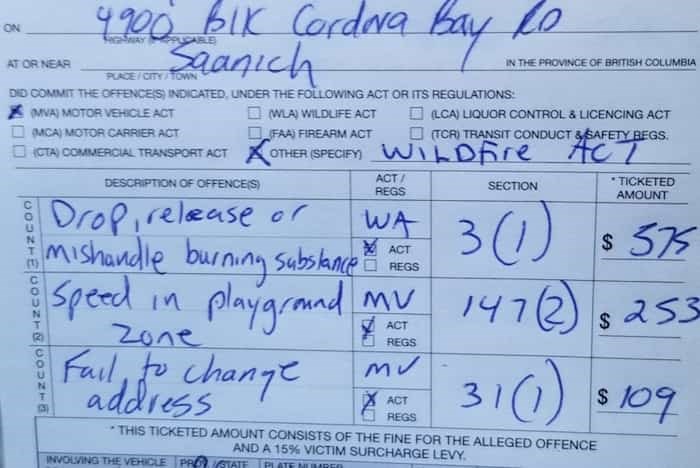 Saanich police issued a ticket to a driver who threw a lit joint out their vehicle window while speeding through a playground zone on Monday, July 29, 2019. Photo: @SPD_Traffic / Twitter

It was a bad start on Monday for a driver who flicked a smouldering joint out of a vehicle while speeding in a playground zone — all while a Saanich police officer was watching.

All told, the driver was hit with $937 in fines. The biggest was $575 for tossing the joint, designated under the Wildfire Act as “dropping or mishandling a burning substance.”

The driver also has to pay $253 for speeding in a playground zone and $109 for having an incorrect address on a driver’s licence.

The officer, a drug-recognition expert, determined the driver was not legally impaired, said Saanich police Sgt. Julie Fast. “If he was, it would’ve turned out to be a totally different situation.”

Fast said the driver was lucky because he could have also been issued a ticket for consuming cannabis in a vehicle.

“The officer chose to use his discretion, and felt that the most appropriate tickets to be issued were the ones that were issued,” she said.

Fast pointed out that Saanich police issued a public notice just last week on the dangers of throwing cigarettes from vehicles. It followed multiple complaints from the public.