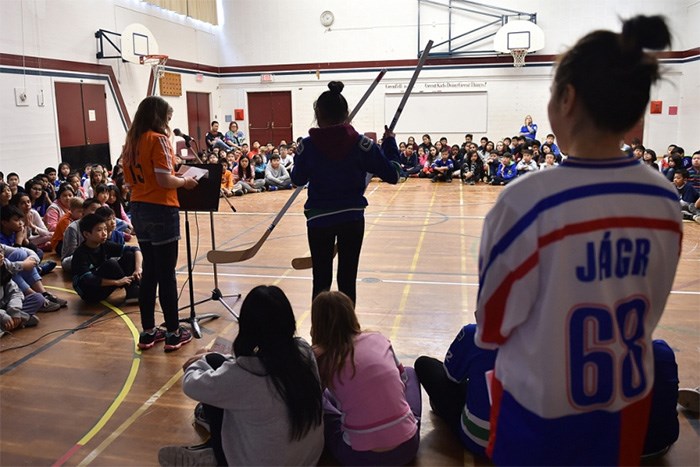 Seated in a circle specifically so they could look one another in the eye, about 250 students in East Vancouver got a poignant primer on the ABCs of empathy Thursday afternoon.

The impromptu assembly at Sir Wilfred Grenfell elementary school served as a rallying cry for students and the larger school community to galvanize around those affected by the bus crash that has claimed the lives of 16 players, staff and personnel from the Humboldt Broncos hockey club in Saskatchewan.

“As a community in Vancouver, in time of need, we would appreciate other communities helping us,” said Grade 6 student Brydan Yuen. “Being empathetic and raising funds for these families teaches us how we can still care for people in other places.”

The assembly coincided with a nation-wide movement called Jersey Day, where people across Canada and the globe were encouraged to wear sports jerseys in solidarity with those in Humboldt and across Saskatchewan.

The Grenfell students responded in kind: Sedin jerseys, nods to Trevor Linden, the B.C. Lions and the Vancouver Whitecaps were all represented in a crowded gymnasium where the focus was on healing and help.

To that end, the students are launching a raffle as of Monday, April 16. A pair of sticks autographed by Vancouver Canucks Chris Tanev and Bo Horvat are in the offing and all money raised will be donated to a GoFundMe campaign that has raised $9 million in under a week.

Donors from 65 countries have stepped forward so far, making it the single largest crowdfunding campaign ever in Canada.

“Showing empathy is the best way to give support to those who are healing and still mourning over loved ones,” said Grade 7 student Nicole Win. “Even the smallest gestures can be meaningful and make a difference at times like this.”

Grenfell principal Jonathan Weresch got to school Monday not knowing what kind of mood he’d find, nor his students’ ability to process the tragedy. By the end of that day, a handful of student reps answered those questions for him. 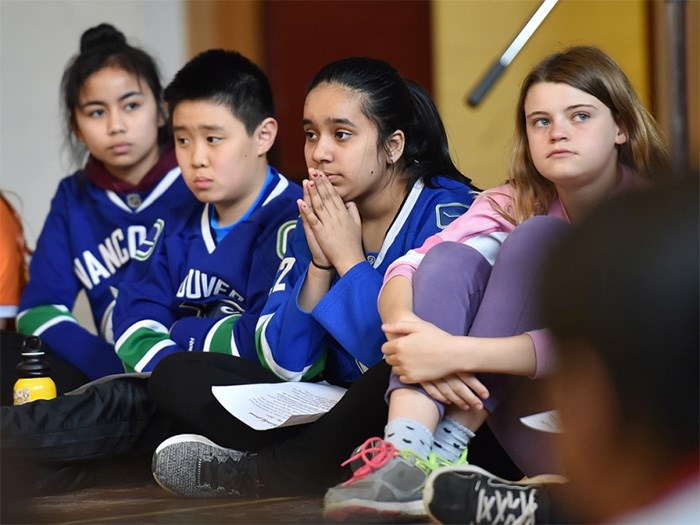 Grenfell elementary students, from left, Stephanie Sarranquin, Brydan Yuen, Aalam Khangura and Coral Heatherington spoke to the importance of empathy and compassion at an assembly Thursday that launched the school’s fundraising efforts for the Humboldt Broncos hockey team. Photograph By Dan Toulgoet

“One of my students said to me, ‘This community needs a helping hand. It needs a hug,’” Weresch said.

Grade 6 teacher and student council liaison Cathy Mrazek got the students together to talk about next steps. Both she and Weresch made a point of avoiding getting into details about the visceral side of the tragedy, and instead focus on the way forward.

The kids bought in immediately, and within four days the raffle idea and assembly were set. Thursday’s assembly was a somber affair where school staff emphasized quiet reflection but also concerted action.

No hard financial targets have been set for the fundraising and the money is almost secondary to the lessons imparted: community, empathy and compassion.

“The student council wanted this to be about communities connecting with communities,” Mrazek said. “We’re not talking about the deaths or the accident itself. They’re focusing on the aftermath and how they can help.”

Outside of the fundraiser, students are also making cards to send to the team. What those cards will say and when they’ll be delivered is still in the planning stages.

“We have to realize that not only are the families grieving, but so are friends, classmates and athletes all around the world,” said Grade 7 student Aalam Khangura. “But we can help. Not only as individuals but as a school community.”