A Lower Lonsdale merchant is speaking out after a willow tree on city-owned land across the street came crashing down, nearly hitting a man and his dog.
Jul 4, 2019 1:31 PM By: Brent Richter 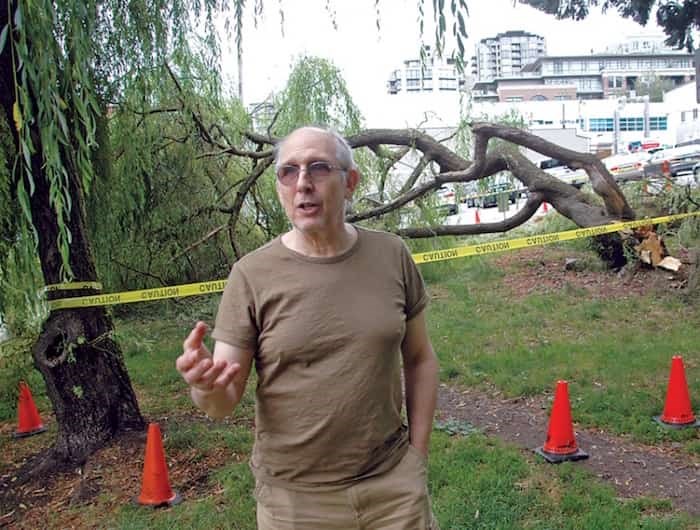 Joel Posluns, owner of Aiki Enterprises in Lower Lonsdale, says the City of North Vancouver should be taking better care of public spaces on his street after a tree toppled over and nearly hit a dog walker Tuesday evening. Photo: Brent Richter / North Shore News

A Lower Lonsdale merchant is speaking out after a willow tree on city-owned land across the street came crashing down, nearly hitting a man and his dog, Tuesday evening.

The incident was captured by Joel Posluns’ security camera at Aiki Enterprises on the 100 block of East First Street, around 7 p.m. The video shows the man and his dog quickly jumping to the sidewalk when the tree on the undeveloped land next to the city’s parking lot, makes a creaking sound and then comes crashing down.

“Like two seconds later, it would have crushed him and his little dog. And the city would have been 100 per cent responsible,” Posluns said. “He probably nearly had a heart attack.”

Posluns argues that if the tree was ready to come down without so much as a gentle breeze to finish the job, it should have been on the city’s radar for being hazardous.

But Posluns said, the city has been unwilling to do maintenance on that particular block of East First despite years of complaints.

“They have told us for 10 years that this is a block in waiting to be developed. They won’t spend a cent on this block to maintain it,” he said. “They just bumped up municipal taxes here by 20 per cent – an extra $4,000 per year and I get nothing for it.”

Although the property doesn’t have park designation and there are no development applications filed for the lot, it’s used as a de facto dog park for people in the neighbourhood.

“It’s an unfortunate thing, because how safe is it for the public?” asked Deanna Turcotte, co-owner of Big Pete’s Collectibles, which just relocated to the 100 block of East First. “I don’t know how a tree gets to that point where it will just fall over like that without anybody having known.”

In a statement, city spokeswoman Stephanie Smiley said it was fortunate there were no injuries or property damage and the city has investigated what happened.

“City staff assessed the fallen tree and determined that there was internal decay that led to its failure. There were no outward signs of decay. For safety’s sake, city staff have inspected the other trees on the property,” the statement read.

The city most recently did minor pruning of the trees in March, Smiley added. City staff returned on Wednesday to chip the remains of the willow.

As for Posluns’ concerns about the general state of the block, Smiley said the city empties the garbage bin on the block 365 days a year. The street and the city-owned parking lot on the block is swept for litter weekly and, three times a month, the city sweeps the angle parking on the north side of the street.

“This site is maintained by a landscaping company that comes once a week to clean and trim the vegetation,” Smiley said. “The city takes pride in its public spaces and works hard to maintain them. If you see something that needs our attention, please contact us and we’ll look into it.”