Delta MP Carla Qualtrough announced the $2 million funding on behalf of the Minister of Fisheries, Oceans and the Canadian Coast Guard, Jonathan Wilkinson, on in Steveston last week.
0
Dec 29, 2018 12:39 PM By: Daisy Xiong 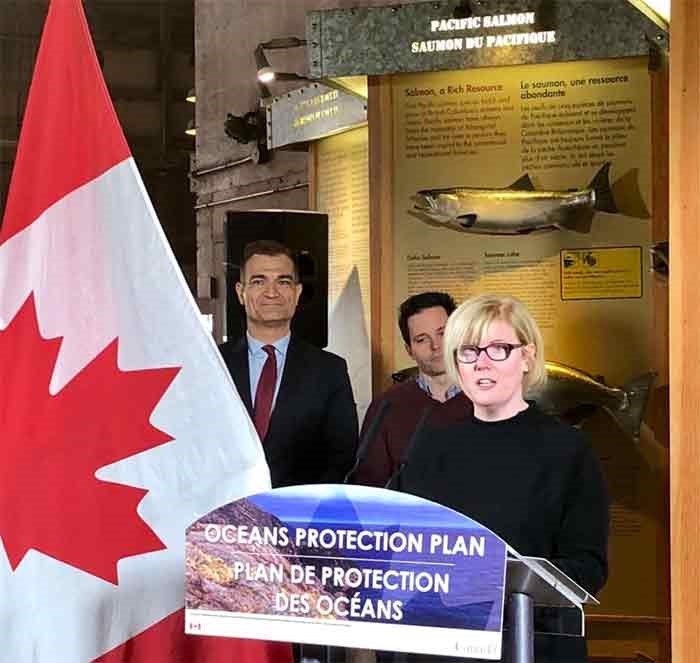 The federal government announced last week in Richmond a $2 million project to restore costal habitats in the Fraser River estuary. The project will improve habitats for wild salmon and southern resident killer whales.

Delta MP Carla Qualtrough made the announcement on behalf of the Minister of Fisheries, Oceans and the Canadian Coast Guard, Jonathan Wilkinson, in Steveston on Dec. 20 .

Ducks Unlimited Canada (DUC), a non-profit organization dedicated to conserving Canada’s wetlands, will lead the project and receive $2 million funding over the next four years through the federal government’s Coastal Restoration Fund.

"Investing in projects that make our marine coastlines more sustainable is what Canadians want, and what our environment and marine species need,” said Qualtrough.

“I am proud to see this funding come to British Columbia through the Coastal Restoration Fund, where it will improve the protection and restoration of coastal habitats for marine species that are vital to the region, from wild Pacific salmon to southern resident killer whales."

This project will improve fish access to tidal marsh habitat in the South Arm of the Fraser River, according to Fisheries and Oceans Canada.

DUC will work with the Raincoast Conservation Foundation to modify "existing sea dikes and flood control infrastructure that is currently impairing the ability of the area to provide habitat to fish,” said in a press release.

“These actions will support juvenile Chinook salmon as they begin their seaward migration, in order to improve their early marine survival and contribute to the rebuilding of Pacific salmon populations.”

In May 2017, the Government of Canada announced the $75 million Coastal Restoration Fund to help rehabilitate some of the most vulnerable coastlines, and to protect marine life and ecosystems across the country.

It is part of the five-year, $1.5-billion Oceans Protection Plan Launched in 2016, which is the largest investment ever made to protect Canada's coasts and waterways.

The Coastal Restoration Fund launched its next public call for proposals in November, which outlines a more targeted approach to address the program's remaining $13.6 million.

This call for proposals focuses on:

- Regional priority areas that have the greatest strategic value;

- Prioritizing regional activities with the greatest benefit to specific coastal ecosystems threats; and