Grumpy old government takes on a beautiful bottle of cabernet sauvignon in a new ad campaign by Canadian wine makers.
Jun 24, 2018 10:09 AM By: Martha Perkins 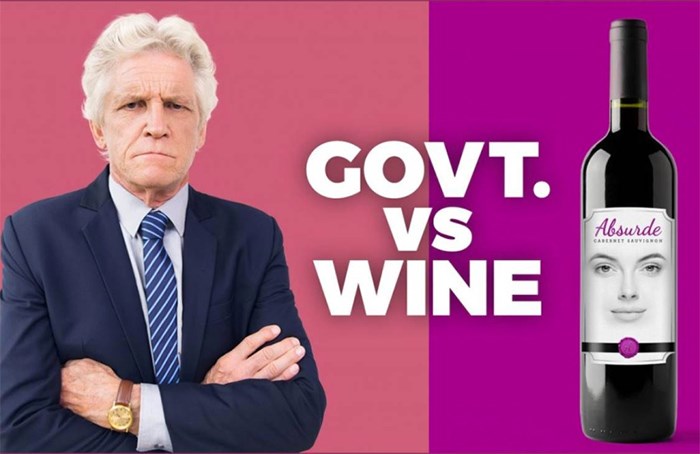 Grumpy old government takes on a beautiful bottle of cabernet sauvignon in a new ad campaign by Canadian wine makers.

It isn't a fair fight — a grumpy old white-haired man mouthing the words of "the government" versus a beautiful bottle of cabernet sauvignon named Absurde.

But when it comes to Canadian vintners' trade war, all's fair in social media battles.

On June 22, the Canadian Vintners Association and its members released a new digital advertising campaign. They're asking people to fill out a form demanding politicians allow every Canadian to buy wines directly from wine producers.

"Hello," says Grumpy Old Man in the 30-second video. "I am the government and I am here to take away your wine."

"Oh, for crying out loud," the woman on the wine bottle's label later responds before reminding viewers that shipping wine across provincial boders is still subject to prosecution in Canada.

Then you're asked to fill out an email form. In B.C., the email is addressed the Bruce Ralston, the provincial minister of jobs, trade and technology. It notes that while direct sales are legal in B.C., Manitoba and Nova Scotia, those provinces represent only 19 per cent of Canadians.

"Enjoying Canadian wines directly from the winery should be your choice, yet [government] regulations make it illegal for you to do that," the campaign text says. "If you think this is ridiculous in this day and age, let your local politician know by emailing them right now!

"We believe that Direct-to-Consumer shipment respects your consumer choice, and helps grow the Canadian wine industry – something we can all get behind."

A direct-to-consumer shipment helps wineries bypass laws that restrict or forbid the shipment of wines from one province to another.

Here are the vintners' arguments in favour of lifting trade barriers:

- More than 37,000 Canadians are employed in our industry

- These regulations restrict the growth of thriving wine industries in B.C., Ontario, Quebec and Nova Scotia and also up-and-coming grape growing regions in other parts of Canada

The Free My Grapes campaign is HERE.