Two people allege that the homeless man who was sprayed with a hose on Saturday verbally abused a woman and tried to urinate on her.
Mar 30, 2020 9:08 PM By: Elana Shepert 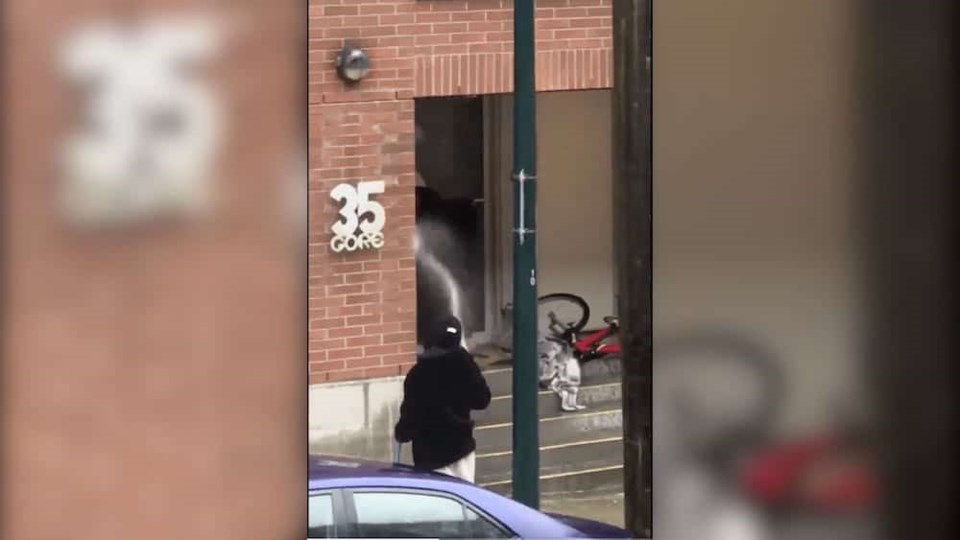 Two women claim that the homeless man who was sprayed with a hose in Vancouver on Saturday had called a woman a racial slur, exposed himself to her, and tried to urinate on her.

On March 28, Vancouver local Mike Chatwin shared a video of a man picking up a hose and walking toward a homeless man who was resting on a building's steps under a blanket. After he sprayed the hose on him, the man on the steps jumped up and began to yell.

Chatwin told Vancouver Is Awesome in a phone call that the incident took place at 9:45 a.m. on March 28. He said that he knows the man who was spraying the hose was the building manager because he's seen him dealing with other people around the building before.

The video sparked controvery online, and now two women have come forward to say that the homeless man is known to many people in the building for being hostile and confrontational.

Fanta Sesay, a 10-year resident of The Edge, writes in an email that the man in the video is her buidling manager, and that he is generally very "mild-mannered." She notes that he also has to deal with a great deal of tense situations due to the area the building is located in, and that he's never resorted to anything like this before.

"Just before the video was shot, our building manager's wife, an African-Canadian, was called the n-word, peed upon and exposed to (with his genitals) by this homeless man that Mike Chatwin is touting as a victim," says Sesay.

"Besides this, this homeless man is notorious in our building for verbally harassing our building manager, as well as other residents and defecating on/around the building. During the time of COVID-19, this is especially disconcerting as our health is at risk."

Sesay adds that her manager has asked the individual to leave on multiple occassions, and that he's spat on him a number of times. Further, she remarks that the police never come. She also says that the couple has a five-year-old son, and that they've received threats to their lives and jobs.

While Sesay said that the homeless man peed on the building manager's wife in her email, she later stated in a phone call that he had attempted to pee on her but had actually peed on his belongings, instead.

Janice Abbott, CEO of Atira Women’s Resource Society, told Vancouver Is Awesome in a phone call that she sees this type of behaviour everyday in the Downtown Eastside.

"Racism and misogyny are rampant," she said. "If you work in a commity like this you'll see it constantly. It isn't easy for women, to be called a [expletive] over and over - it gets to be really hard."

Abbott corroborates Sesay's sentiment toward the building manager, and said that she's seen him cleaning the building many times and that he always keeps his composure, even when people on the street have aggressively called him the "n-word."

A part-time employee of Atira, the building manager's wife spends part of her time working at The Edge, too. When asked how Abbott knows that the homeless man exposed himself to her, she states that she believes her. However, she did not witness the incident.

While she admits that spraying the man with the hose was not right, Abbott says the man who shot the video had other options.

"Now, this family is receiving threats. The woman is scared to walk around in the neighbourhood. That isn't right."

In an email, Abbott also writes that, "I should add that spitting is another common response down here when we ask someone to so something they don’t want to do, like “stop calling me a [expletive],” or “ can I get around you,” or “sorry, we don’t have seconds,” or, or , or. We get probably have two or three spitting incidents a month, which all end up as Worksafe (WCB) complaints. I am all too familiar with the behaviours [the partner] described and… I believe women."

Cst. Tania Visintin, Media Spokesperson for the Vancouver Police, told V.I.A. in an email that officers did respond to the area of Gore Avenue and Alexander Street around 10 a.m. for a man who had been sprayed with a hose.

"An investigation is ongoing as police are speaking with both people involved," she wrote.

"The video posted is just one piece of information. As with any investigation, police need to speak to both sides without rushing to judgement."