A Burnaby hookah lounge that has been the subject of dozens of noise complaints won’t be able to legally reopen its doors.
0
Oct 18, 2019 9:49 AM By: Burnaby Now 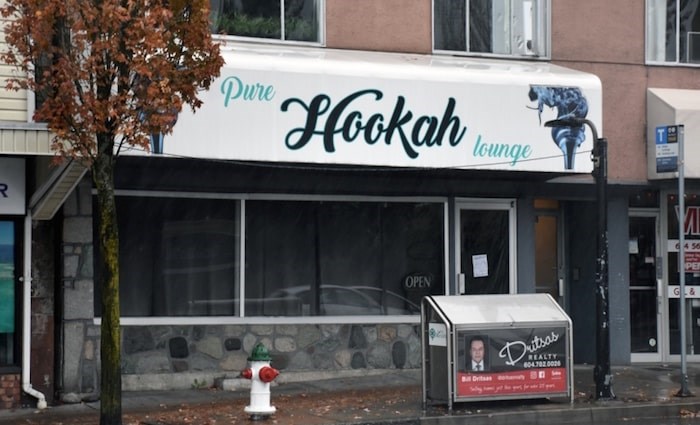 Pure Hookah Lounge opened near the Vancouver border in 2017, but has since had its business licence cancelled by the city. Photo by Kelvin Gawley/Burnaby NOW

A Burnaby hookah lounge that has been the subject of dozens of noise complaints won’t be able to legally reopen its doors.

Pure Hookah lounge appealed the cancellation of its business licence to Burnaby city council, but the mayor and councillors unanimously denied the request at a special meeting Wednesday.

The lounge opened on Hastings Street, two blocks east of the Vancouver border, in 2017. The complaints began to ramp up the next year, according to the city.

And noise was just one issue area residents had with the lounge that often remained open as late as 4 a.m., one man told the NOW.

“A typical night would be probably starting around 11 o’clock. There would be taxis upon taxis coming in, the street filling up with cars, people screaming on the street, drug dealing going on out front, people urinating on the sidewalks, in the field, on the building, puking everywhere, openly drinking, doing drugs and driving,” said Jack, who lives across the street from the lounge.

Twice in one night, there was a brawl involving 15 or more people in the middle of Hastings, according to Jack, who asked for his last name to be withheld, fearing retribution from former attendees of the lounge.

More than half a dozen of Pure’s neighbours attended Wednesday’s meeting, hoping council would uphold the decision of its chief licence inspector, Dan Layng, who cancelled the lounge’s business licence in July.

“I think that we're all quite ecstatic about what has gone on here tonight just because we've been dealing with noise, but not only noise but violence in the area because of these guys,” Jack said of council’s decision not to reinstate the licence.

Since April 2018, the city and Burnaby RCMP have collectively received 119 complaints or calls for service relating to the business, according to a report Layng presented to council.

Between Dec. 9, 2018 and March 13, 2019, the RCMP was called to Pure 20 times, according to the report. During the same three-month period, Layng says, the cops were called to the city’s seven other hookah lounges a total of seven times.

In April 2019, “ongoing noise complaints” led the city to impose new operating hours requiring it close by 11 p.m. – but the complaints kept rolling in, indicating the business was flouting the rules and eventually leading Layng to cancel its business licence altogether.

According to Layng, Pure was operating under a restaurant licence but was issued several liquor special event permits from the province, which are “not intended to be a replacement for permanent food-primary or liquor-primary liquor licences.”

A lawyer representing the business owners, Dean Davison, argued there was no evidence his clients had violated Burnaby’s noise bylaw. He said the city didn’t have any proof the lounge had ever exceeded the maximum allowable decibel level.

Davison suggested the “inordinate number of complaints” had come from a small handful of disgruntled neighbours.

“I think it's not unreasonable or unlikely that the individuals complaining (don’t) want anything in that area. That's not how it works. It's licensed with a proper licence. It's unfortunate but sometimes you have to wear earplugs, you have to close the window, you have to do some things to work and live in cities,” he said.

“They just want you to shut down this lounge so they can get a better sleep, and that's not unreasonable – but that's not the city's duty.”

Davison said the disagreement is a civil matter and the complainants are welcome to sue the lounge’s owner or landlord – but then said they would likely lose such a court challenge.

Jaison Jose, identified by the city as the brother of company director Manbir Singh, told council the city was applying its bylaws unequally.

“Tomorrow, if I call up and say, 'Hey, I'm not happy with Cactus Club operating,’ are you going to shut down all the Cactus Clubs in Burnaby?” he said.

After hearing the submissions, council went into a closed meeting to get legal advice. When members re-emerged, city staff explained that the business licence had been revoked based on a different section of the bylaw than the one with specific decibel limits.

“We’re not happy,” Davison told the NOW following the meeting.

He said the owners are now seriously considering seeking a judicial review of the decision.

That review could include a question of whether the business owners’ rights under the Charter of Rights and Freedoms have been violated, he said.

“Hookahs are really based in the Muslim faith,” he said. “It’s very much tied to the culture.”

The NOW pointed out that traditional hookah lounges aren’t known to include DJs, late-night hours and liquor.

“You're thinking of a typical hookah lounge for 50- and 60-year-olds,” he said. “It's pretty cool that the younger generation is taking up something that's got thousands of years of tradition.”