North Vancouver RCMP are stumped. Someone has been illegally cutting down trees in a wooded area next to Inter River Park.
0
Jan 8, 2019 7:37 AM By: Brent Richter

Someone has been illegally cutting down trees in a wooded area next to Inter River Park. 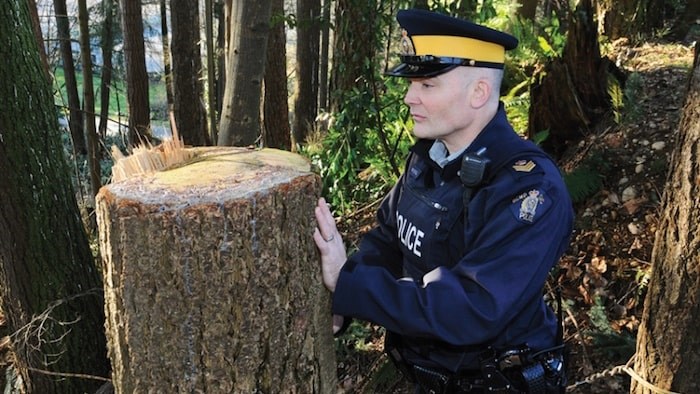 Police have been investigating since Dec. 20 when residents of a townhouse complex on Premier Street heard a tree come down just east of the Jaycee House community hall.

Initially, they assumed it was due to the windstorm blowing through town, but when the residents went to inspect, they saw the truth.

“It had been cut definitely deliberately by someone in the middle of the night. It’s now the second incident like that,” said Sgt. Doug Trousdell, North Vancouver RCMP spokesman.

Both trees were firs, about 30 metres tall with 40-centimetre diameters, Trousdell said. A District of North Vancouver arborist inspected the stumps and sawdust and figured the suspect used a handsaw of some kind, not a chainsaw.

“It’s not a small task for sure,” Trousdell said.

One of the trees came down a short distance from a playground tucked into the woods off Premier Street.

“The risk was definitely there,” he said.

Typically when someone engages in guerrilla lumberjacking, it’s to open up a favourable view corridor or let sunlight in. In 2014, two homeowners agreed pay almost $70,000 to Metro Vancouver in an out-of-court settlement after they admitted to hiring an arborist to cut down 35 trees in Capilano River Regional Park. That doesn’t appear to be the case here, though, Trousdell said.

“It’s just a puzzle. We can’t see any motive for why anybody would do that. It’s not improving anyone’s view or anything else. And the neighbours are getting pretty worried. There is a walking trail and a playground there and obviously dropping trees is bad thing,” he said. “We’ve kind of ticked all the boxes that we can think of as a reasonable explanation other than somebody who is committing mischief and we don’t know why they would do that.” 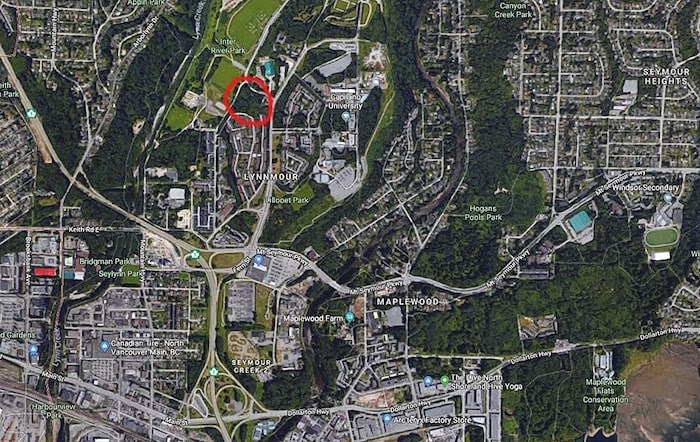 The red circle shows the rough area where the trees have been illegally cut. Google Maps.

The RCMP and the District of North Vancouver are now asking anyone with information about the tree cutting to come forward.

“This isn’t a common occurrence in the district but our arborists are checking other trees in the area to make sure no further damage has been caused,” said Stephanie Smiley, district spokeswoman. “I know the neighbours are quite concerned.”