Indigenous woman says man punched her, told her to 'Go back to Asia'

The man heard her sneeze while she was walking her dog.

An Indigenous woman says a man punched her in the face and shouted racist insults at her while she was waking her dog in East Vancouver on Friday, May 15.

In a post on Twitter, the woman's father, Don Bain, writes that a man heard his daughter sneeze while she was walking her dog. He also shares an image of his daughter, Dakota, with bruising on her face.

"This is my daughter Dakota. We are Indigenous. She was walking her dog last night in Vancouver when a racist guy heard her sneezing," he writes.

Bain says that the man yelled at her, punched her and then walked away. He adds that the man, "thought she was Asian and her sneezing was COVID-19."

He remarks that "acism is a virus."

In the image, Dakota Holmes adds that the man told her to, "Go back to Asia."  She also notes that she has allergies and a throat infection, and that she went to take her dog for a walk. 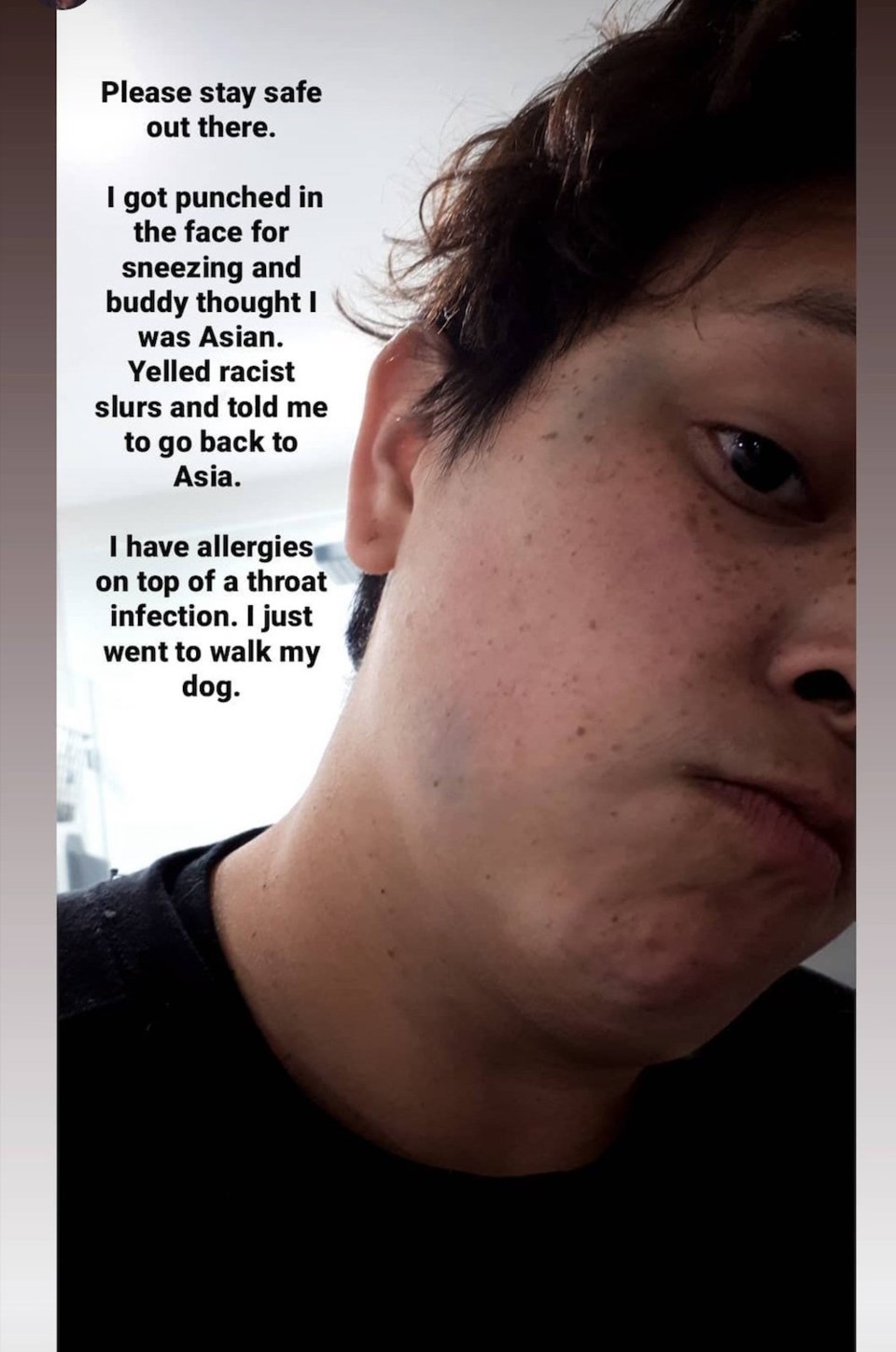 A photo of Dakota with bruising on her face after the incident. Photo: Photo: @lheidli1 / Twitter

Vancouver Police Spokesperson Sgt. Aaron Roed tells Vancouver Is Awesome in an email that police responded to an assault which was reported to have occurred in the area of East 33rd Avenue and Fraser Street on Friday, May 15 shortly before 8:30 p.m.

"Our initial investigation shows that a person was assaulted and this may have been related to race. The incident has been forwarded to our Diversity section and Hate Crimes Investigators who are looking into this incident," writes Roed.

"The victim did have minor physical injuries and did not need medical treatment the night of the incident."

Roed adds that no arrests have been made at this time and investigators continue to look for a suspect and witnesses.

"As a police service, we work hard to build strong relationships with marginalized groups in our community and encourage anyone who has experienced hate, bigotry, or discrimination to call us. Hate crimes and hate incidents have always been significantly under-reported. We need witnesses and victims of hate crimes to call police so we can investigate these incidents, understand what is happening in our neighbourhoods, and help people feel safe and secure," he writes.

The Union of British Columbia Indian Chiefs shared a post on Twitter condemning the racist assault and calling on the government to step up its efforts to prevent further violence.

Dakota Holmes writes: “I’m sharing my story to get the message out there that racism is a deadly and sobering threat and every single instance of racism must be addressed and called out by all of us so that it stops. Although the attacker thought I was Asian at first, I yelled out that I was Indigenous, and he still didn’t stop and didn’t seem to care. As an Indigenous woman, I am acutely aware that sexism and racism, often intersecting, are part of my life, and I never take chances on my safety. However, society continues to treat Indigenous women as disposable. What would have happened if I hadn’t had my dog with me and if I didn’t have a strong network of family and friends for support?”

Grand Chief Stewart Phillip, President of the UBCIC, stated: “The Union of BC Indian Chiefs is urging all members of the public and all levels of governments to ensure they actively oppose racism of any kind during COVID-19 and always. In order to keep people safe, we all must be crystal clear that there is absolutely no place for racism in our communities. We are absolutely disgusted and angered about the violent, racist attack against Dakota Holmes, and we offer our sincere and heartfelt sympathy and solidarity to Asian communities who have borne the brunt of COVID-19 related racism. We fully agree with the calls for all levels of government to immediately take urgent steps to prevent and condemn any racist and xenophobic violence and discrimination that is related to COVID-19.”

According to the Vancouver Police Department, as of May 1, 2020, there have been 20 anti-Asian hate crimes reported this year, compared to 12 reported in the whole of 2019.

UBCIC notes that this trend speaks to the stark reality that people of colour face disproportionately high risks to their physical and mental survival every day, a risk that has been intensified by dangerous false messaging about COVID-19.

Premier John Horgan has released the following statement about racist activity in British Columbia during the COVID-19 pandemic:

“Everyone has a right to live without fear of violence or discrimination. Yet we are hearing disturbing stories of a rise in anti-Asian racist behaviour since the beginning of the COVID-19 pandemic.

“People are being targeted as they go about their daily lives. It is unacceptable. I have said it before: hate has no place in our province and it will not be tolerated. Our strength is in our diversity and we reject all forms of racism, discrimination, intolerance and bigotry.

“Racism is also a virus. Through challenging times, British Columbians must stay united. We are always stronger and more resilient as a province when we treat each other with kindness, generosity and respect. To do so, we must all stand together to call out racism and discrimination when we see it.”

A police investigation will continue, which includes a canvas of the neighbourhood for possible surveillance video. The hate crimes investigator has also been notified.

Anyone with information related to the attack on Dakota Holmes is asked to immediately contact the Vancouver Police Department at (604) 717-3321.
Reader Feedback