Canada has a growing but still somewhat untapped domestic labour resource to draw from: First Nations. It is the one demographic in Canada that is defying a general greying trend.
0
Aug 30, 2018 6:52 AM By: Nelson Bennett

BIV special report: With the digital industrial revolution radically retooling the labour landscape, BIV looks at automation, unionization and other major issues facing employers, employees and the culture of work in the lead-up to Labour Day. 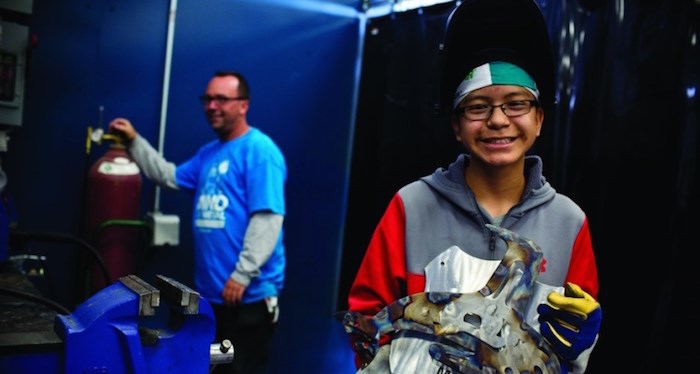 Mark Stevens, 13, was one of the participants in a recent workshop at the Kitimat Vocational Institute aimed at getting First Nations children interested in welding. Photo:?lng canada

“That means there are now fewer young people about to enter the labour force than those about to leave it,” the National Aboriginal Economic Development Board (NAEDB) study stated.

It’s the sort of statistic that business leaders seize on to promote immigration policies focused on attracting skilled workers.

But while immigration is likely to remain important for sectors like high tech, for other sectors of the economy, Canada has a growing but still somewhat untapped domestic labour resource to draw from: First Nations.

It is the one demographic in Canada that is defying a general greying trend.

“By 2020, over 400,000 young Aboriginal people will enter the workforce, adding to the 652,000 who are already of working age,” an Indigenous Works study of the Aboriginal labour market finds.

“It’s a demographic certainty – there will be shortages,” said Indigenous Works president Kelly Lendsay, who urges businesses that don’t already have Aboriginal engagement and hiring policies to start thinking about them.

“There are only two new sources of labour in Canada: Indigenous people and immigrants.”

“There is a real opportunity to look within our own country,” said Aaron Sam Sumexheltza, chief of the Lower Nicola Indian Band. “And I’m hopeful that industry, business and government will see First Nations young people – the fastest-growing demographic – and invest in them. Because I believe when First Nations people prosper, everyone else will prosper.”

According to Statistics Canada, 4.3% of Canada’s population in 2011 identified as Aboriginal, with “registered Indians” representing 1.9% of the population. Roughly 75% live off reserve.

Despite the growth in the number of working-age First Nations people, they remain under-represented in certain sectors of the economy – most notably the knowledge economy. That partly explains why there is still an earnings gap.

“Among those with a post-secondary education certificate/diploma or a university degree, Aboriginal people earned at least as much on average as their non-Aboriginal counterparts,” the study by Melissa Moyser found.

Aboriginal people in Canada are generally under-represented in areas requiring university degrees, however. The exceptions are law, education, social sciences and government services – areas in which Statistics Canada found First Nations people to be “overrepresented.”

Only 8% of Aboriginal people in Canada have a university degree, compared with 23% of the general Canadian population, according to the Assembly of First Nations.

But there are some promising trends, said Lendsay, who points to Saskatchewan and Manitoba, where Indigenous people now make up 10% of the university student population.

“We now have almost 1,000 Indigenous physicians, we’ve trained thousands of lawyers, we have people going into pharmacy, engineering, and yes, we’re well represented in the trades,” Lendsay said.

A study produced last year by Lendsay’s organization found that most businesses in Canada have no Indigenous engagement policies or partnerships. The one exception is the resources sectors, like mining, where Indigenous people make up 22% of the workforce.

“The resource sector has been doing this for 40 years,” Lendsay said.

Other sectors, such as hospitality, retail and manufacturing, simply aren’t aware of the opportunities for hiring Indigenous people, Lenday said. Or, if they are, they don’t know where to start in developing partnerships with Indigenous organizations that can help them develop engagement policies.

He urges them to work with the National Association of Friendship Centres, First Nations economic development organizations and other Indigenous agencies to start forging some of those relationships.

An Indigenous hiring policy not only could help address a growing skilled labour crunch, but also may soon become mandatory for companies that do business with the federal government.

Ottawa has committed to implementing hiring requirements for Indigenous people as recommended by the Truth and Reconciliation Commission.

Any business that gets federal contracts worth $1 million or more will need policies and strategies that comply with the Truth and Reconciliation Commission’s recommendations.

“You just might want to get your engagement strategy in order with the Indigenous market if you want to continue to win these contracts or go after new federal contracts,” Lendsay said.

One sector of the economy that promises to provide more employment opportunities for Indigenous people comprises First Nation-owned businesses.

The Lower Nicola Indian Band is just one recent example.

The band recently got into the pipeline service business when it partnered with Vancouver’s Infracon to acquire Ogilvie Mountain Holdings.

It’s a highly specialized business, so Lower Nicola band members will need skills training to qualify for jobs with the new company.

“We are going to need to train our community members for sure,” Sumexheltza said.

Despite the progress that has been made to date on education, skills training and employment, there are still gaps, especially on reserves that continue to suffer from low high school graduation rates.

But it’s not up to governments alone to provide more education and training opportunities. The NAEDB report urges businesses to contribute to capacity building and adopt First Nations hiring policies to address their labour needs.

The energy sector is already doing that in a significant way. LNG Canada, for example, has spent about $2.4 million on training and other programs for the construction industry, including for First Nations workers.

That includes $1.5 million for a trades training fund to provide funding for the academic portion of apprenticeships. As of this month, 34 Indigenous apprenticeships have been funded.