Two inmates escaped from William Head Institution in Metchosin on Sunday night. The men are considered dangerous and if spotted, should not be approached.
0
Jul 8, 2019 2:00 PM By: Cindy E. Harnett 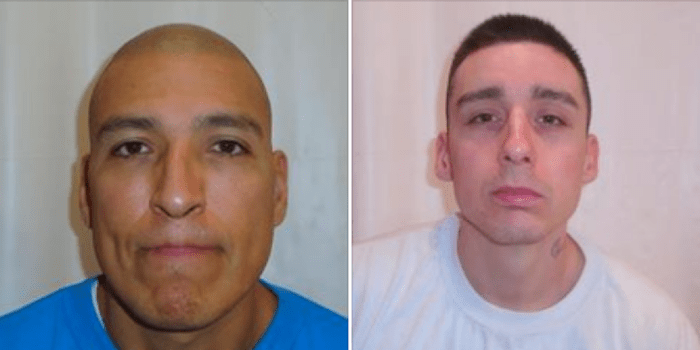 Two inmates who had escaped from William Head Institution in Metchosin have been captured. Photo courtesy Correctional Service of Canada

UPDATE JULY 10: The inmates were successfully recaptured on the night of Tuesday, July 9. Read more HERE.

Two inmates escaped from William Head Institution in Metchosin on Sunday night. The men are considered dangerous and if spotted, should not be approached, West Shore RCMP said.

Inmates James Busch, 42, and Zachary Armitage, 30, escaped from William Head Institution about 6:45 p.m. RCMP officers are searching for the men with help from an RCMP helicopter.

Police with the help of a police dog searched Sunday night but were unable to locate the pair.

“Police continue to deploy resources to search for the escaped prisoners,” said West Shore RCMP in a statement.

In a Facebook post, the Correctional Service of Canada said: “We are working with police to locate the inmates as quickly as possible.”

Police describe Busch as a First Nations male, about 5 feet 9 inches tall, weighing about 160 pounds. He has a shaved head and a skull tattoo on his left forearm.

Armitage is also a First Nations male, standing five feet, 10 inches tall, with black, short, trimmed hair. He also has a tattoo with a crown and “No Love” on his right arm.

The Correctional Service and West Shore RCMP could not be immediately reached for further comment.

Police are asking for the public’s assistance for information to locate and arrest the pair.

William Head Institution is a minimum-security prison on 87 acres of federal land at the southern tip of Vancouver Island in Metchosin, about 30 kilometres northwest of Victoria.

The 200-person-capacity William Head institution is composed of five neighbourhoods of clustered duplexes.

Three sides of the institution are surrounded by the Pacific Ocean.

That hasn’t prevented escapes in recent years, although the inmates were later caught.

In February 2015, Michael Douglas Sheets escaped William Head during an escorted absence in downtown Victoria. He was found the next day hiding at a residence on Jubilee Avenue.

In September 2013, two inmates took advantage of darkness and low tide to swim almost 200 metres to a beach on the other side of the rocky outcropping.

That same month, a 61-year-old man with a history of jail breaks went missing and was found hiding on the 32-hectare grounds after two hours.

An inmate who escapes and is caught can face charges and be sent to a higher-security prison.

Inmates transferred to William Head from higher-security prisons are supposed to have a low risk of escape and pose a low risk to the public. The inmate must also be working on a plan to prepare for release.