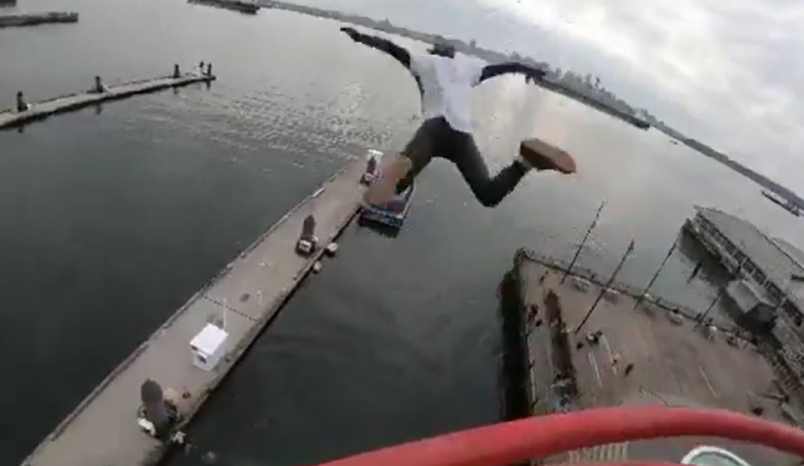 Daredevil videos of a man jumping off the top platform of Lonsdale Quay Market's iconic "Q" tower in North Vancouver are making the rounds on social media – and from comments circulating so far, it appears the stunt is a flop with spectators.

The first video was posted to Twitter on Wednesday by @NickVanCity who wrote he witnessed four men jumping and backflipping off the top platform while he was out taking his dog for a walk.

In responding to comments on Twitter, he wrote that he wasn’t quick enough to capture the first lot of jumps on video, but one of the men ran up the stairs and jumped a second time, which he was able to capture.

A second video titled "Jumping off of the Lonsdale Quay tower [New POV]" emerged on Reddit on Thursday morning showing a close-up of the man jumping off the ledge, wearing a wetsuit and shoes. In the background, you can hear a friend count down the jump and a few people cheering as he hits the water. At first, it seems he is going to bellyflop into the water, but he later coils into a ball avoiding any injury.

It’s unclear why the men decided to jump from the "Q" platform on Remembrance Day into cold waters, though @NickVanCity said on Twitter that he assumed it was for a YouTube video stunt, commenting to fellow Tweeters to "file this one under ‘don’t try this at home.’"

The video had many viewers simply wondering why anyone would want to jump into the Burrard Inlet and questioning whether or not this type of foolish behaviour could ruin the use of a perfectly good lookout for everyone else. And, their comments were not kind.

"I don’t understand why anyone would want to do this. First off, the water is only 10 C. It’s Burrard inlet, not the cleanest water around here. And why in such a public place where I’m sure a few people probably thought it was a jumper. In shoes too no less! It’s just asking to drown in my opinion. To each to their own, I guess," wrote Redditor TheVantagePoint.

Redditor ApolloRocketOfLove echoed the comments about the water, writing: “All of the garbage and fluids from all of the ports in that area are in that water. This guy is gunning for a Darwin award."

While Redditor mitallust was fairly annoyed by the stunt, saying: "Oh boy I can't wait for them to put up fencing and ruin what was a great lookout because of this stupid sh*t."

Another Redditor, WilfulMoon, said the stunt was simply attention-seeking behaviour.

"Why else would they do it? Attention. Every generation has kids willing to do crazy sh*t for attention, this generation just has more cameras to film it and more platforms to share it with others than previous generations," they wrote on Reddit.

He said the RCMP did not recommend engaging in dangerous behaviour that could cause injury.