'It's been quite the year': Tiny white house lands on East Vancouver street amid U.S. election

Resident June Hunter found a tiny house full of piano parts and fall leaves on her street this week. She still has no clue where it came from.
Nov 6, 2020 12:10 PM By: Sarah Grochowski 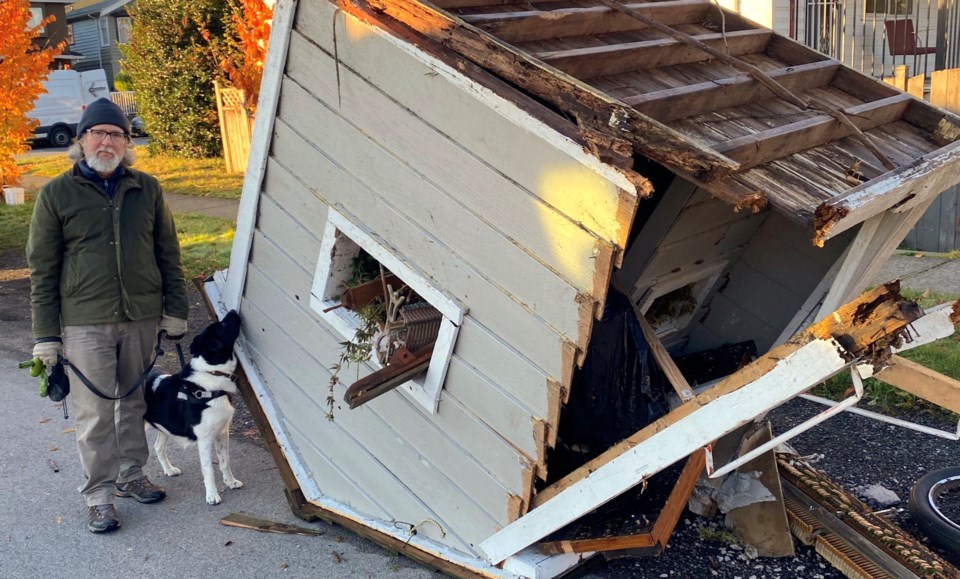 A tiny home was dumped upon an East Vancouver street this month. A local artist thinks it's symbolic of the U.S. election. (Twitter/JH_Images)

An East Vancouver artist says it came as no surprise that a small and weathered house landed on her street overnight.

It coincided with the near-overthrow of U.S. President Donald Trump, who Friday appeared to be falling behind in key states in his bid for the White House.

Artist June Hunter captured the sight near the intersection of Kaslo and Parker, calling it “the most spectacular piece of dumping we’ve ever seen.”

After 30 years in the neighbourhood, the extent of what’s been dumped in the cover of the night has mostly been household items like mattresses and couches – but never a house itself.

The tiny home, which laid flipped over on its roof, has piano parts and foliage pouring out of its sides.

“It’s flipped on its back as looks as if it was pushed off a truck,” Hunter described.

Her husband Phillip called the City of Vancouver a few days ago to report it.

Hardly worth mentioning in the context of this week/year — but this tiny house,full of piano parts & foliage, landed overnight on our street ... #eastvan #notinkansasanymore #2020

House dumped on street 'symbolic' of 2020

“Is it symbolic of the possible change of leadership in the White House?” Hunter remarked to Vancouver Is Awesome.

Her daughter, Lily, said 2020 has been like the movie Jumanji, “with random things looping out of the landscape at you."

For Lily, this included being laid off from her film job and seriously burning her hand while preparing a pasta dish.

“It’s been quite the year. This house is emblematic of that,” Hunter added.

“Maybe its appearance can provide a smile, now that everyone is able to breathe a bit better – in terms of the U.S. election.”